Dengue Fever (band)
This article is about the rock band. For the disease, see Dengue fever.

Dengue Fever is a six-member band from Los Angeles who combine Cambodian pop music and lyrics with psychedelic rock.

The band was formed in 2001 by Ethan Holtzman and his brother Zac after Ethan was inspired by a trip to Cambodia. As Ethan and Zac were searching for a vocalist to sing in Khmer, lead singer Chhom Nimol was discovered in a nightclub in the Little Phnom Penh area of Long Beach. She was already a well-known karaoke singer in Cambodia, but decided to move to the United States after visiting her sister, and thought it was a good chance to make more money to send to her family back home.[1] Zac is a vocalist and guitarist, fomerly with Dieselhed, while Ethan plays the Farfisa organ. Rounding out the band are bassist Senon Williams (who played in Radar Bros until January 2009), drummer Paul Smith, and David Ralicke on brass.

Their self-titled debut album was released in 2003. All lyrics on the earlier albums are sung in Khmer, while the third album introduces some songs in English. Many of the songs are covers of 1960s Cambodian rock tunes by such artists as Sinn Sisamouth, Pan Ron, and Ros Sereysothea, but some are originals, first written in English by the Holtzmans before being translated.

In 2005, the band toured Cambodia during the Bon Om Thook water festival, to critical acclaim. The documentary film Sleepwalking Through the Mekong documents the band's touring in Phnom Penh and other major Cambodian cities. There, singer Chhom Nimol, whose family included renowned singers from the 1970s onward, reconnected with the Cambodian fanbase, many of whom remembered the heyday of Cambodian rock from that era. The trip was a transforming experience for the rest of the band as they performed with master musicians and recorded new songs along the way, providing the band with new material. The film also reveals aspects of modern Cambodia, as the band crosses a cultural chasm with the same spirit as Cambodia's original rock pioneers.[2] 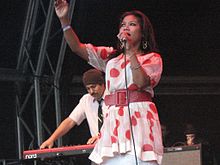 In June 2008, Real World Records released Venus On Earth in all territories outside of the U.S. and Canada.[3] Peter Gabriel, founder of their new label, said of the deal, "We have Dengue Fever coming out on Real World Records (outside of the USA) - it’s really cool stuff, with the small Cambodian singer and big American guys behind! They’re California based but have taken 60’s Cambodian pop as their main source of inspiration and it’s done with a lot of style. It’s spirited, impassioned stuff." Venus On Earth was selected as one of the best world music records of 2008 by the iTunes Store.

Dengue Fever has entered into partnerships with a number of charitable organizations to support causes in Cambodia. They are involved with the wildlife and forest conservation organization Wildlife Alliance,[4] and have donated recordings for charity records with the Sweet Relief Fund, a charity that aims to provide financial assistance to musicians dealing with illness, disability, or age-related issues. The group also compiled a collected of Cambodian rock music from the pre-Khmer Rouge era, entitled "Electric Cambodia", in 2010.[5] All proceeds from this album were dedicated to Cambodian Living Arts.[6]

Use in other media

"Ethanopium", a cover of a song by Ethiopian jazz musician Mulatu Astatke, was included in the soundtrack of Jim Jarmusch's 2005 film Broken Flowers.

"One Thousand Tears of a Tarantula" was included on the soundtrack for the second season of the Showtime series Weeds, as well as on the recap of that episode for the third season.

The band's Khmer cover of Joni Mitchell's "Both Sides Now" was included on the soundtrack of Matt Dillon's 2002 film set in Cambodia, City of Ghosts.

"Seeing Hands" was used as the theme tune to the 2008 UK television series Sanchez Get High.

"Escape From Dragon House" was featured in the fourth episode of True Blood.