Mountains and hills of Scotland

Mountains and hills of Scotland

Scotland is the most mountainous country in the United Kingdom. The area north and west of the Highland Boundary Fault is known as the Highlands, and contains the country's main mountain ranges. Scotland's mountain ranges, in a rough north to south direction are: The Highlands & Islands, The Hills of the Central Lowlands, the Southern Uplands. The zone includes Britain's highest peaks, especially Ben Nevis at over 4000 feet, with several similar peaks in the Cairngorms.

Sgurr Fiona and the Corrag Bhuidhe pinnacles on An Teallach

The main ridge of the Cuillin in Skye 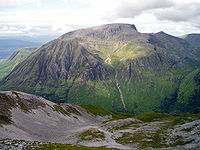 The steep south face of Ben Nevis from Sgurr a' Mhàim

Some of the most spectacular mountains occur in the northwest highlands, especially on Skye, the largest island off the coast. On the mainland nearby lie some great ranges based on the Torridonian sandstone, a Precambrian rock which overlies yet older rocks such as the Lewisian gneiss. Some of the highest peaks, such as Beinn Eighe are crowned by white quartzite, which gives those peaks a distinctive appearance. The trend continues to the north with larger caps of the white rock at Foinaven and Arkle. Some of the quartzite contains fossilized worm burrows. It is known as pipe rock and is circa 500 million years old.

The formation continues to the north with gigantic peaks such as An Teallach near Ullapool and Stac Polly in Sutherland. The Torridonian rocks continue south to Applecross opposite Skye, where similar massive mountains occur. The Black Cuillin are mainly composed of basalt and gabbro, the latter being a very rough rock which makes for superb grip for mountaineers. It is from the dark colour of the gabbro that the Black Cuillin receive their name. The summits of the Cuillin are bare rock, jagged in outline and with steep cliffs and deep cut corries and gullies.

The mountains exhibit many notable individual peaks and many exceed 3000 feet in height, so qualifying as Munros. Ben Nevis exceeds 4000 feet. To the south, Glen Coe has many notable mountains, such as Buachaille Etive Mòr and Bidean nam Bian, both of which are Munros. There is also a famous ridge walk, the Aonach Eagach, on the opposite side of the glen. The ridge is one of the most severe in the entire country, being a craggy arête with few escape routes.

The approximate southern-boundary of the Cairngorms range runs from slightly east of Braemar, west along Glen Dee to White Bridge, through Glen Geldie to the head of Glen Feshie. The western-boundary runs down Glen Feshie (northward) and the River Spey to Aviemore. The northern-boundary runs roughly eastward from Aviemore through Glen More to Glen Avon. The eastern-boundary then runs (southward) up Glen Avon, and over Am Bealach Dearg to slightly east of Braemar. The Cairngorms feature the highest, coldest and snowiest plateaux in the British Isles and are home to five of the six highest mountains in Scotland: Ben Macdui , Braeriach, Cairn Toul, Sgor an Lochain Uaine and Cairn Gorm. These mountains are all Munros, and there are a further 13 mountains with this categorisation across the area, of which another five are among the twenty highest peaks in the country.

To the south of the Cairngorms are a separate distinct range, The Grampians.

Hills of the Central Lowlands

The Campsie Fells from Bar Hill above Twechar

The southern and eastern parts of Scotland are usually referred to as the Scottish Lowlands, but these areas also have significant ranges of hills, although these are lower than the Highland mountains. Because they are much closer to towns and cities, they are popular for hill walking and rambling than the more distant mountains of the northern Highlands.

In addition to the main ranges, there are numerous individual hills in the Lowlands, often volcanic in origin. Many are known by the Scots word Law, meaning hill. 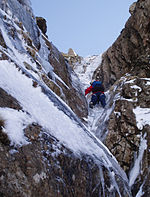 The Southern Uplands form a continuous belt of hills across southern Scotland from Galloway to the Borders. The Uplands are divided into several local ranges. The heartland of the Galloway hills lies to the north of Loch Trool and many excellent walks into that particularly wild remote territory start from the extensive car park by Bruce's Stone. There are three ridges which run northwards from the Loch Trool/Loch Dee/Clatteringshaws area - The Awful Hand on the west, The Rhinns of Kells to the east, and the Dungeon hills in between.

Scottish peaks are categorised by means of the following hill lists. Note that any one peak may ‘qualify’ for inclusion in several lists.