Prince John of the United Kingdom

Prince John of the United Kingdom 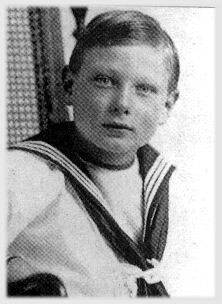 The Prince John (John Charles Francis; 12 July 1905 &ndash; 18 January 1919) was a member of the , the youngest son of King George V and Queen Mary. The Prince had and was consequently largely hidden from the public eye.

Prince John was born at York Cottage, on the Sandringham Estate, , . His father was then Prince George, Prince of Wales (later King George V), the second eldest son of King Edward VII and Queen Alexandra. His mother was The Princess of Wales (later Queen Mary), the eldest daughter of the Duke and Duchess of Teck. At the time of his birth, he was sixth in the line of succession.

The Prince was baptised 3 August 1905 at St Mary Magdalen Church in Sandringham; his godparents were the King of Portugal, the Duke and Duchess of Sparta, Princess Alexander of Teck, King Haakon VII of Norway, - his namesake - and the Duke of Fife.

Prince John had his first at age four. He did not attend his father's coronation on 22 June 1911.

At age 12, his condition having deteriorated, he was settled with his own household at on the . Here, John was happy and well cared for. He had a , , known in the family as "Lalla." Thomas Haverly was a coachman from , chosen to drive for John because he was known to be reliable. He took the Prince on outings in the country or to the sea and to the "big house" at Sandringham when any members of the family were in residence. Wood Farm also had its own cook and a live-in maid. John had a tutor, Henry Peter Hansell (1863-1935), as well. An area of the garden was set aside for him with a plaque, "Prince John's garden," and gardeners who helped him tend it. Indoors, he had his books, a pedal car (in which he was photographed) and a ride-on train. Family photos show him riding a bicycle and a horse without assistance.

It has often been said that John was lonely at Wood Farm, but this is not entirely accurate. He was provided with a companion there, Winifred Thomas, a girl of similar age, who suffered from asthma and had been sent to live in the country with her aunt and uncle, George Stratton, the riding master at Sandringham. Soon after Winifred's arrival, the Strattons received a visit from Queen Mary and the nanny (a role Victorians referred to as a nurse), who were looking for a friend for John. Winifred's delicacy probably recommended her to them and after the visit she played with the Prince almost every day. When he was ill, she sat by his bed while the nanny read to them. They went on nature walks together and worked in the garden. No date is given for Winifred's arrival but it must have happened long before the move to Wood Farm in 1917. Years later, Winifred remembered Prince John having had a bicycle chase with his first cousin Olav of Norway (later King , reigned 1957-1991).Winifred continued to be close to John during the . She remembered his excitement at watching passing overhead at Sandringham in 1916 and his pleasure in meeting 'a real, live soldier', her father, Sergeant Frederick Thomas, who visited that same year.

Winifred Thomas remembered John’s mother, Queen Mary, as a loving and interested parent who spent a lot of time with her son — another departure from the accepted view. A passage of the Queen's diary, written some days after John's death reads: "Miss the dear child very much indeed."

Other comments in the Queen’s diary include: "Tuesday, January 21st 1919. Canon Dalton & Dr Brownhill conducted the service, which was awfully sad and touching. Many of our own people and the villagers were present. We thanked all Johnnie's servants, who have been so good and faithful to him."

She was genuinely moved by their loyalty and went further than simply thanking them. Thomas Haverly's daughter was given John's blackboard, which in time passed on through her own family, and Winifred was given a number of his books with Queen Mary's own hand-written inscription, "In memory of our dear little Prince." The Queen also treasured photographs of him, her own diary notes of their time together, and letters. One of these, written by John to Winifred's uncle who had broken his arm in a riding accident, reads: "Dear Mr. Stratton, I hope your arm is better. Are you going to church? With my love from John."

Neither of John’s parents was at Wood Farm when he died unexpectedly in the early hours of 18 January 1919. At 5.30 a.m., the telephone rang at . was on the line, telling the Queen that John had had a severe fit and could not be awakened. Since John turned 13, the fits had grown worse and more frequent. Now, he was dead. Despite the hour, King George and Queen Mary immediately were driven down to Wood Farm and found Mrs. Bill 'heartbroken but resigned', and the lifeless boy lying as if asleep on his bed. "Little Johnnie looked very peaceful... ." the Queen wrote later. "He just slept quietly in his heavenly home, no pain, no struggle, just peace for the little troubled spirit."

The fuller entry from the Queen's diary reads:

"Lalla Bill telephoned from Wood Farm, Wolferton, that our poor darling Johnnie had passed away suddenly after one of his attacks. The news gave me a great shock, though for the little boy's restless soul, death came as a great release. I brought the news to George & we motored down to Wood Farm. Found poor Lalla very resigned but heartbroken. Little Johnnie looked very peaceful lying there ... For him it is a great release as his malady was becoming worse as he grew older and he has thus been spared much suffering. I cannot say how grateful we feel to God for having taken him in such a peaceful way, he just slept quietly... no pain, no struggle, just peace for the poor little troubled spirit, which had been a great anxiety for us for many years ever since he was four."

The name "John" has been considered unlucky by the royal family and its use avoided since the death of the prince. The popularly negative historical view of the only English monarch to bear the name -- King John (reigned 1199-1216) -- especially his fictionalization as the villainous Prince John in the stories, has likely compounded concerns about the name. It was reported that wished to name her elder son "John," after her own father, but was prevented from doing so by royal tradition.Fact|date=September 2008

The dramatist wrote and directed a television film "" that viewed many of the events that transpired on the world stage during the reign of King George V through the eyes of the youngest son, Prince John. It aired on in 2003 and on in 2006, and on in 2004 and again in 2005, and on SBS in 2007. The title role was played by two young British actors, Daniel Williams (young Prince John) and Matthew Thomas (older Prince John). Charlotte "Lalla" Bill's character was played by . The film won three s. [ [http://www.epilepsyfoundation.org/aboutus/pressroom/journawards/lostprince.cfm "The Lost Prince," Three Time Emmy Winner, Honored by Foundation"] , Epilepsy Foundation website.]