Part the Second, Chapter II, Section I, Article I of the Massachusetts Constitution reads,

There shall be a supreme executive magistrate, who shall be styled, The Governor of the Commonwealth of Massachusetts; and whose title shall be – His Excellency.

The Governor of Massachusetts is the chief executive of the Commonwealth, and is supported by a number of subordinate officers. He, like most other state officers, senators, and representatives, was originally elected annually. In 1918 this was changed to a two-year term, and since 1966 the office of governor has carried a four-year term. The Governor of Massachusetts does not receive a palace, other official residence, or housing allowance. Instead, he resides in his own private residence. The title "His Excellency" is a throwback to the royally-appointed governors of the Province of Massachusetts Bay. The first governor to use the title was Richard Coote in 1699; since he was an Earl, it was thought proper to call him "Your Excellency." The title was retained until 1742, when an order from the King forbade its further use. However, the framers of the Constitution revived it because they found it fitting to dignify the governor with this title.[1]

The governor also serves as Commander-in-Chief of the Commonwealth's armed forces. The power of this position has declined as the states of the United States have become less like individual nations and more like subnational units. 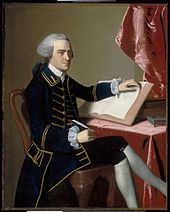 John Hancock was the first Governor of the Commonwealth.

There shall be annually elected a lieutenant governor of the commonwealth of Massachusetts, whose title shall be, His Honor and who shall be qualified, in point of religion, property, and residence in the commonwealth, in the same manner with the governor: and the day and manner of his election, and the qualifications of the electors, shall be the same as are required in the election of a governor.

The lieutenant governor serves in place of the governor when he is outside the borders of Massachusetts. Historically also a one-year term, the office of lieutenant governor now carries a four-year term the same as that of the governor. Noted in the article above are religious, property, and residency requirements for both the office of governor and lieutenant governor, of which only the residency requirement remains in effect. To be eligible for either office, a candidate must have lived in Massachusetts for at least seven years immediately preceding his election, and originally also had to be a Christian owning at least £1,000 worth of real property.

According to the state constitution, whenever the chair of the governor is vacant, the lieutenant governor shall take over as acting governor. The first time this came into use was five years after the constitution's adoption in 1785, when Governor John Hancock resigned his post five months before the inauguration of his successor, Governor James Bowdoin. Most recently, Jane Swift became acting governor upon the resignation of Paul Cellucci. Under this system, the lieutenant governor retains his or her position and title as "Lieutenant Governor" and never becomes governor; only acting governor.

The lieutenant governor, when acting as governor, is referred to as "the Lieutenant-Governor, acting governor" in official documents. An example of this is found in Chapter 45 of the Acts of 2001, where a veto by Swift was overridden by the General Court:

This Bill having been returned by the Lieutenant-Governor, Acting Governor with her objections thereto in writing (see House 4281) has been passed by the House of Representatives, notwithstanding said objections, two-thirds of the House (137 yeas to 15 nays) having agreed to pass the same.

Passed by the Senate, notwithstanding the objections of the Lieutenant-Governor, Acting Governor, two-thirds of the members present (37 yeas to 1 nay) having approved the same.

The Massachusetts constitution has used the term “acting governor” since before the Revolution. All modern constitutions[citation needed] have rejected such language. The Massachusetts courts have found, without rejecting the term, that the full authority of the office of the governor devolves to the lieutenant governor upon vacancy in the office of governor, i.e., there is no circumstance short of death, resignation, or impeachment that would relieve the ‘acting governor’ from the full responsibilities of being the governor.

Old line of succession to the council

Whenever both the governor and his lieutenant left their offices vacant, the Governor's Council was charged with acting as governor. Governor Increase Sumner died in office on June 7, 1799, leaving lieutenant governor Moses Gill as acting governor. Acting Governor Gill never received a lieutenant, and died himself on May 20, 1800.

For the ten days between Acting Governor Gill's death and Gov. Caleb Strong's inauguration, the Governor's Council became the executive arm of the government. The council's chair, Thomas Dawes, was the closest person to governorship during this time, but was at no point named governor or acting governor.

New and current line of succession

Article LV of the Constitution created a new line of succession that did not entrust the governorship to an eight-member council.

The new and current line of succession is as follows:

The Governor has a 10-person cabinet, each of whom oversees a portion of the government under direct administration (as opposed to independent executive agencies). See Government of Massachusetts for a complete listing.

When the Governor dies, resigns, or is removed from office, the office of Governor remains vacant for the rest of the 4 year term. The Lieutenant Governor does not succeed but only discharges powers and duties as Acting Governor. However, if a vacancy in the office of governor continues for six months, and the six months expire more than five months before the next regular biennial state election midway through the governor's term, a special election is held at that time to fill the vacancy for the balance of the unexpired four-year term.[2]

The front doors of the state house are only opened when a governor leaves office or a head of state comes to visit the State House, or for the return of flags from Massachusetts regiments at the end of wars. The tradition of the ceremonial door originated when departing governor Benjamin Butler kicked open the front door and walked out by himself in 1884.

Incoming governors usually choose at least one past governor's portrait to hang in their office.

Immediately before being sworn into office, the governor-elect receives four symbols from the departing governor: the ceremonial pewter "Key" for the Governor's office door, the Butler Bible, the "Gavel", and a two-volume set of the Massachusetts General Statutes with a personal note from the departing governor to his/her successor added to the back of the text. The governor-elect is then escorted by the Sergeant-at-Arms to the House Chamber and sworn in by the Senate President before a joint session of the House and Senate.[3] In January 2007, Governor Mitt Romney and Governor-elect Deval Patrick conducted the transfer ceremony the day before Patrick's inauguration.

The departing governor then leaves on the "Lone Walk" (also called the "Long" or "Lonesome" Walk). Historical accounts indicate that Increase Sumner was the first governor to begin this tradition in 1799. The departing governor, after leaving office, walks alone down the Grand Staircase, through the House of Flags, into Doric Hall, out the central doors and down the steps of the State House.[3] Some walks have been modified. Some past governors have had their wives, some friends, or staff accompany them walking slightly behind. Other governors have had staff and friends line the walking route, offering congratulatory gestures as the honoree passes. A few times the outgoing governor would meet the incoming governor outside on the State House steps. The outgoing governor would descend as the incoming governor ascended. A 19-gun salute[citation needed] would be offered as the two governors met. Frequently the steps are lined by the outgoing governor's friends and supporters. In January 1991, outgoing Lieutenant Governor Evelyn Murphy, the first woman elected to statewide office in Massachusetts, walked down the stairs before Governor Michael Dukakis. In January 2007, the inauguration of incoming Governor Deval Patrick was conducted outdoors in front of the State House. Because of this, outgoing Governor Mitt Romney took the long walk down the front steps the day before.

Despite several proposals for establishing an official residence for the Governor of Massachusetts, the Commonwealth of Massachusetts does not have a Governor's Mansion.

In 1955, Governor Foster Furcolo turned down a proposal to establish the Shirley-Eustis House in Roxbury as the official residence.[4] The house had been built by colonial governor William Shirley.

At one time, Governor John A. Volpe accepted the donation of the Endicott Estate in Dedham from the heirs of Henry Bradford Endicott. He intended to renovate the 19th century mansion into a splendid governor's residence.[5] After Volpe resigned to become Secretary of Transportation in the Nixon Administration, the plan was aborted by his successor in consideration of budgetary constraints and because the location was considered too far from the seat of power, the State House in Boston.

Other proposals have included the Province House and the Hancock Manor.[5]

Since the governor has no official residence, the expression "corner office," rather than "governor's mansion," is commonly used in the press as a figure of speech for the office of governor.