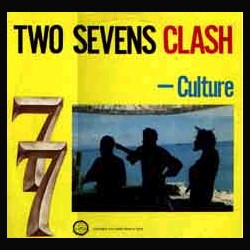 "Two Sevens Clash" is the debut album by band Culture, recorded with producer Joe Gibbs at his own Joe Gibbs Recording Studio in Kingston in 1976, and released on Gibbs' eponymous label in 1977 (see ). The album's title is a reference to the date of , .

The liner notes of the album read: "One day had a vision, while riding a bus, of 1977 as a year of judgment -- when two sevens clash -- when past injustices would be avenged. Lyrics and melodies came into his head as he rode and thus was born the song "Two Sevens Clash" which became a massive hit in reggae circles both in Jamaica and abroad. The prophecies noted by the lyrics so profoundly captured the imagination of the people that on July 7, 1977 - the day when sevens fully clashed (seventh day, seventh month, seventy-seventh year) a hush descended on Kingston; many people did not go outdoors, shops closed, an air of foreboding and expectation filled the city."