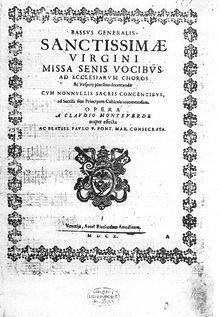 Frontpage from the Bassus Generalis
Venice, 1610

Vespro della Beata Vergine 1610 (Vespers for the Blessed Virgin, 1610; SV 206 and 206a) — commonly called Vespers of 1610 — is a musical composition by Claudio Monteverdi. The term "Vespers" (evening prayers) is taken from the Hours of the Divine Office, a set of daily prayers of the Catholic Church which have remained structurally unchanged for 1500 years. In scale, Monteverdi's Vespers was the most ambitious work of religious music before Bach. This 90-minute piece includes soloists, chorus, and orchestra and has both liturgical and extra-liturgical elements.

Vespers is composed around several Biblical texts that are traditionally used as part of the liturgy for several Marian feasts in the Roman Catholic church: the introductory Deus in adjutorium (Psalm 69), five Psalm settings, sacred motets (called “concerti”) between the Psalms, a traditional Hymn, a setting of the Magnificat text and the concluding Benedicamus Domino.

Monteverdi’s Marian Vespers of 1610, was his first sacred work since his first publication twenty-eight years prior, and stands out for its assimilation of both old and new styles, although it cannot be specifically classified as prima pratica or seconda pratica, per se. The Vespers were published in July 1610, in combination with a six-voice mass which parodied a motet of Nicolas Gombert; In illo tempore loquante Jesu. Today, over four hundred years later, the precise intentions of this large work are not clearly known or understood. This has been a great topic of debate among musicologists for decades, and it has even been suggested by Graham Dixon that Monteverdi’s setting of the Vespers is more suited towards use for the feast of Saint Barbara, claiming, for example, that the texts taken from Song of Songs are applicable to any female saint. He goes on to write that formatting the Vespers to fit a Marian feast made the work more "marketable". There are several facts that support this view: there are just two Marian songs in the whole work (Audi Coelum and Ave Maris Stella); the sonata could very easily be rearranged to any saint's name; and the text of the Duo Seraphim is connected with Saint Barbara (because she is generally connected with Trinity).

The Vespers was first printed in Venice in 1610 when the composer was working at the ducal court in Mantua. Historical record does not indicate whether Monteverdi actually performed the Vespers in either city; the work may have been written as an audition piece for posts at Venice (Monteverdi became maestro di cappella at St Mark's Basilica in Venice in 1613) and Rome (where the composer was not offered a post).

The Vespers is monumental in scale, and requires a choir large enough and skillful enough to cover up to 10 vocal parts in some movements and split into separate choirs in others while accompanying seven different soloists during the course of the piece. Interestingly, solo parts are included for violin and cornett, but the ripieno instrumentation is not specified by Monteverdi. Additionally, he did not specify a set of plainchant antiphons to insert before each psalm and the concluding Magnificat. This allows the performers to tailor the music according to the available instrumental forces and the occasion of the performance (the particular feast day's liturgy would have included suggested antiphons that could be chanted before Monteverdi's psalm settings). Another example of tailoring to the forces available is the fact that the collection includes two versions of the Magnificat, one of which is scored for a smaller group of musicians than the other. Some scholars have argued that this suggests that the Vespers was not intended as a single work, but it is generally performed as such.

Monteverdi's unique approach to each movement of the Vespers earned the work a place in history. The work not only presents intimate, prayerful moments within its monumental scale, but it also incorporates secular music in this decidedly religious performance and its individual movements present an array of musical forms - sonata, motet, hymn, and psalm - without losing focus. The Vespers achieves overall unity by building each movement on the traditional Gregorian plainchant for each text, which becomes a cantus firmus in Monteverdi's setting.

Structure of the work

Order of Service (with texts)

Position of the motets

The position of the motets Nigra Sum, Pulchra es, Duo Seraphim and Audi Coelum is disputed. The title page of the first print of the score suggests that they are not part of the Vespers, but intended as separate Sacred Concertos. However, their place in between the psalms indicates that they were intended to be part of the Vespers, but could also be performed on other occasions, such as at the court of the Duke of Mantua, Monteverdi's employer. Furthermore there arise problems as to whether the motets may be antiphon substitutes, or antiphon supplements.