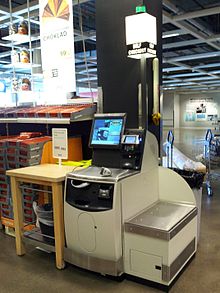 NCR FastLane self checkout at an IKEA store.

Self checkout machines provide a mechanism for customers to pay for purchases from a retailer without direct input to the process by the retailer's staff. They are an alternative to the traditional cashier-staffed checkout. They have been implemented most often in grocery stores and other large-scale stores.

In self-checkout systems, the customer is permitted to scan the barcodes on their own items, and manually identify items such as fruits and vegetables (usually with a touchscreen display), which are then weighed where applicable, and place the items into a bagging area. The weight observed in the bagging area is verified against previously stored information to ensure that the correct item is bagged, allowing the customer to proceed only if the observed and expected weights match.[1]

There is considerable technology, both electronic and software (artificial intelligence) involved in the operation of the machines. For example, the main reason the Optimal Robotics self-checkout system, based on Schneider's patents, did so well compared to the other model on the market at the time, e.g., the CheckRobot model marketed by IBM in the 1990s,[2] is because it had self-learning functions, i.e., it didn't have to be programmed with the weight, color, etc. of a new product, but learned these features on its own. The first time the Optimal machine scanned a new product, it actually allowed the customer to scan and bag the product without interference and assumed the customer was honest (the customer would not know it was the first time it was presenting an item to the machine and would not want to try to steal something fearing an alarm would be triggered and the item rejected), and it accumulated data on the product. As the machine saw the items more times it learned what the weight tolerances of this product were, what the color tolerances were (there were color cameras overhead on the early Optimal machines), etc. This information was passed on to other self checkout machines. So in essence the machines learned on their own, and provided seemingly reliable service to the supermarket with little intervention on behalf of the supermarket. As well, similar computer routines were required to keep the machine functioning smoothly. For example, in United States Patent No. 5,125,465 awarded to Dr. Howard Schneider of Optimal Robotics on June 30, 1992, a mechanism to allow the customer to keep scanning one item after another quickly, i.e., more quickly than the scales could mechanically react to, is given:[3]

Normally, an attendant watches over several self checkout machines, to provide assistance, prevent theft through exploitation of the machines' weaknesses, and enforce payment. Attendant assistance is also required for purchase of age-restricted items.

Payment on these machines can be accepted by various methods: card via EFTPOS, debit/credit cards, electronic food assistance cards, cash via coin slot and bank note scanner, and in-store gift cards where applicable. Most coupons also have barcodes and can be scanned the same way that items are scanned although some require attendant entry.

The benefit to the customer is in the reduced checkout time because stores are often able to run two to six self checkout units efficiently where it normally would have had one cashier. Self checkout may create an illusion of privacy and anonymity, when in fact the self checkout attendant can track the progress of customers on all machines via a separate terminal known as a RAP (Remote Attendant Post).[4][5]

The benefit to the retailer in providing self checkout machines is in reduced staffing requirements since one attendant is all that is required to run four to six checkout lanes at one time.[4][5]

Self-checkout is vulnerable to some shoplifting techniques. However, in many cases the machine will pick up the attempt to steal or else cause the shopper to alter behavior (e.g., put an item not on the scales but somewhere else where it should not be put and will be noticed by the system supervisor). For example, in 2007, a man was charged with replacing the tag of a plasma TV with a $4.88 DVD, and trying to purchase it through self-checkout.[6] 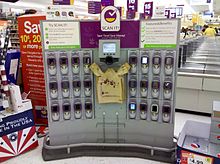 An alternative system consists of a portable barcode scanner that is used by the customer to scan and bag items while shopping. When the customer has finished shopping, the scanner is brought to a checkout kiosk, where the information from the barcode scanner is downloaded to the kiosk, usually in conjunction with a customer loyalty card. The customer pays and receives a receipt at the checkout kiosk. The integrity of the system is maintained through the use of random audits or RFID.

Theft on these services is reduced by a combination of a high barrier to entry, and occasional audits of customers' shopping, where customers chosen at random are taken to a specialised till and have their shopping scanned in the usual way.[7][unreliable source?]

In 2010, the open-source-self-check open source project was announced. By using readily obtainable hardware and open source software, this library self checkout system costs less than one-tenth of the commercial version.[8][9]

BBC news reported in December 2009 on the rise of self service tills and how even the error messages like 'unexpected item in the bagging area' are becoming part of the new shopping experience and even given rise to t-shirts in tribute to these new machines.[10]