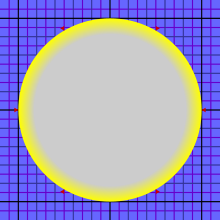 In mathematics, the open unit disk (or disc) around P (where P is a given point in the plane), is the set of points whose distance from P is less than 1:

The closed unit disk around P is the set of points whose distance from P is less than or equal to one:

Unit disks are special cases of disks and unit balls.

Without further specifications, the term unit disk is used for the open unit disk about the origin, D1(0), with respect to the standard Euclidean metric. It is the interior of a circle of radius 1, centered at the origin. This set can be identified with the set of all complex numbers of absolute value less than one. When viewed as a subset of the complex plane (C), the unit disk is often denoted

The open unit disk, the plane, and the upper half-plane

Much more generally, the Riemann mapping theorem states that every simply connected open subset of the complex plane that is different from the complex plane itself admits a conformal and bijective map to the open unit disk.

which is the inverse of the Cayley transform.

Geometrically, one can imagine the real axis being bent and shrunk so that the upper half-plane becomes the disk's interior and the real axis forms the disk's circumference, save for one point at the top, the "point at infinity". A bijective conformal map from the open unit disk to the open upper half-plane can also be constructed as the composition of two stereographic projections: first the unit disk is stereographically projected upward onto the unit upper half-sphere, taking the "south-pole" of the unit sphere as the projection center, and then this half-sphere is projected sideways onto a vertical half-plane touching the sphere, taking the point on the half-sphere opposite to the touching point as projection center.

The unit disk and the upper half-plane are not interchangeable as domains for Hardy spaces. Contributing to this difference is the fact that the unit circle has finite (one-dimensional) Lebesgue measure while the real line does not.

Unit disks with respect to other metrics

From top to bottom: open unit disk in the Euclidean metric, taxicab metric, and Chebyshev metric.

One also considers unit disks with respect to other metrics. For instance, with the taxicab metric and the Chebyshev metric disks look like squares (even though the underlying topologies are the same as the Euclidean one).