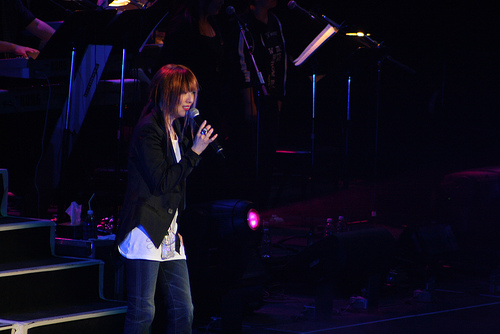 Sammi Cheng Sau-Man is a and actress. Having enjoyed much success in the Hong Kong music industry, Sammi has been known as a .

Sammi Cheng was previously named Twinnie Cheng. [HKSS. " [http://www.hkss.com/_old/stars/profiles/sammic.shtml HKSS] ." "Sammi Cheng." Retrieved on .] Contrary to popular belief, "Twinnie" is not her birth name. The name came about when Sammi was still schooling and her English Language teacher wanted everyone in class to have an English name. When Sammi turned to her sister for help, her sister came up with the name "Twinnie". The name was later changed to "Sammi" as "Sammi" sounds a little like "Sau Man". Cheng received her education at SKH St. Peter's Primary School and Tang Shiu Kin Victoria Government Secondary School.

Sammi Cheng entered the entertainment industry at the age of 16 through a high profile, annual TV singing contest, the in 1988.

In 1993, Cheng realized that in order to rise from a top B-list artist to an A-list artist, she had to create a unique image for herself. She capitalized on the attention received from her duet with artist , "Do you really have me in your heart?" (其實你心裡有沒有我), winning the with that song. [zh icon TVB. " [http://tvcity.tvb.com/jsg/awards/awards_4957575116481164106171108186113170247166177188250.html TVB.com] ." "1993 Jade Solid Gold Top 10 Awards." Retrieved on .] Cheng then went through a complete 180-degree transformation, dying her hair orange, changing her style. Her 4th studio album "Sammi's Happy Maze" (鄭秀文的快樂迷宮) was also released, which include the hit single "Chotto Matte" (Chotto 等等). Her new image fitted well with the new single, which was a remake of a very upbeat Japanese song by . The success helped Sammi and boosted her singing career. In 1994 she continued to capitalize on her wild, new image. Her first album of that year was "Big Revenge" (大報復). The album included the mega hit "Ding Dong" (叮噹), which became one of Sammi's all-time signature songs. But with her new fame also came a lot of backlash from the media. Critics pointed out that Sammi purposely her Cantonese. Instead of saying "Ding Dong", Sammi pronounced it as "Deen Dong". Despite the criticism, the song was one of most popular dance songs of that year. In 1994 the racy and controversial cut of "Ten Commandments" (十誡) was banned from the radio for a few days after its initial airplay of the track including tiny bits of what can be recognized as soundtrack. In 1995 Cheng disappeared from the public eye for nearly half a year. Later that year, it was revealed that company had signed her. She let her hair color return to black and temporarily abandon the wild image she used to have.

In 1995 she released her first album "Missing you" (捨不得你). In 1996, the company decided it was time for Sammi to expand her market and fan base beyond Hong Kong. They released her first Mandarin album, "Worth It" (值得). The album was number one on the Taiwan IFPI chart for six consecutive weeks. She won a number of awards, most notably she was voted back-to-back as the most popular female artist by from 1995 to 1996. [zh icon TVB. " [http://tvcity.tvb.com/jsg/awards/awards_17920416825219711917023916410718611317280188250.html TVB] ." "Most popular female artists." Retrieved on .] She would finish that year with her first concert titled "Sammi's X-Dimension Concert" (鄭秀文X空間演唱會). In 1998 she was also a featured star in a sponsored Music Horizons concert along with international singers such as and .

In the 1990s, another female star, was one of her main rivals.

In July 2004, she held 7 nights of "Sammi Vs Sammi" concerts in Hong Kong. She also broken the record as being the youngest female singer to hold more than 50 accumulated concert nights in the city.

In the late 1990s during the slump of the HK film industry she staged a box office revolution by starring in the film "" by acclaimed director , co-starring and the movie "Summer Holidiay" in 2000. The films were hits at the box office hit in all regions, and Hong Kong has cumulated nearly 60 million at the box office. The "" received a sold out record of more than 200,000 copies. From this film, she was also a nominee for "Best Actress" as well as taking part in singing the "Best original film song" in the 2001 Hong Kong Film Award. [HK film awards. " [http://www.hkfaa.com/history/list_20.html HKfaa.com] ." "20th Hong Kong film awards." Retrieved on .] Following the success of those movies she starred in a few more including , , , and many more. At the Cheng was one of the front runner for the "Best actress" award for the film in 2005. Other contenders for the award included , , and . [China.org.cn. " [http://www.china.org.cn/english/features/film/137209.htm China.org.cn] ." "Sammi Eyes Best Actress at Venices." Retrieved on .]

Cheng changes her look and image for every album, which enables her to gain extensive attention and appreciation from the music professional and the public. Sammi is a trendsetter of hair-coloring and has been chosen to be one of the Top Ten fashionable celebrities in Hong Kong. She has been signed and endorsed by many companies. Some of the bigger endorsements include SK-II skin care and Mona Lisa bridal service. Her first album with , "Can't Give You Up" (捨不得你) released 3 hit singles, "Gentlemen, you are so fine today" (男仕今天你很好), "Can't Give You Up" (捨不得你) and "The Mourning Song for Love" (愛的輓歌). She was selected as the prominent celebrity for the endorsement of using "Can't Give You Up" (捨不得你) as the theme song.

In 2005, Cheng had only one feature film release and no music projects. She became a representative for Veeko and Titus, a fashion and watch brand in Hong Kong, respectively. She also began writing Sunday columns for Mingpao magazine. In 2006, she released another greatest hits album, but there were no new tracks. The break was taken to recoup her energy from the entertainment industry.

After taking a break for about 2 years, she re-invented herself again, and held her 6th concert in HK from 18 to 25 May 2007 titled (Mi being the nickname of SamMI given by her fans). Due to the huge demand for tickets, the four performances was expanded to eight. She returned to entertain at the age of 34, and invited fellow star and to perform with her. [China.org.cn. " [http://www.china.org.cn/english/entertainment/212164.htm China.org.cn] ." "Sammi Cheng Concludes Solo Concert in HK ." Retrieved on .] At the end of the first show, audience members continued to shout 'encore' for 15 minutes until Sammi came back out and sang "Our Theme Song" (我們的主題曲). The concert was expanded to the .

In 2003 Cheng performed at the to raise funds for SARS affected families.