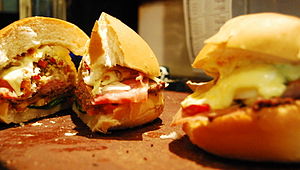 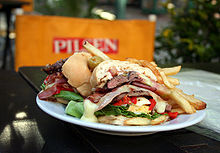 A chivito sandwich, with all the trimmings

Chivito is the name of a sandwich-style national dish in Uruguay, and consists primarily of a thin slice of filet mignon (churrasco beef), with mayonnaise, black or green olives, mozzarella, tomatoes and commonly also bacon, fried or hardboiled eggs and ham. It is served in a bun, often with a side of French fries.[1] [2] Other ingredients might be added into the sandwich such as red beets, peas, grilled or pan-fried red peppers and slices of cucumber.

The word Chivito literally means "little goat" or "baby goat". It is claimed the name arose at a restaurant in Uruguay, when a patron who was from the northern part of Argentina (Cordoba) ordered baby goat meat ("chivito") like one that she had ordered in Argentina. She was looking for a special taste, something similar to what she had experienced in her region. But since the restaurant owner Mr. Cabrera did not have this specialty, he served his toasted bread with ham, sliced filet mignon and seasoned it with different ingredients.[citation needed] This happened in Punta del Este (Uruguay-South America) in a famous 1960s local restaurant named "El Mejillon" owned by Mr Carbonaro. This restaurant does not exist anymore in Punta del Este, but anyone who wants to know the real story should contact Graciela Carbonaro, Mr Carbonaro's daughter who still lives in Punta del Este.[original research?] The biggest ever "chivito" party was organized in Colonia del Sacramento (Uruguay).[citation needed]

The Canadian Chivito (in Spanish Chivito Canadiense) is a variation of the sandwich, with the addition of Canadian bacon.