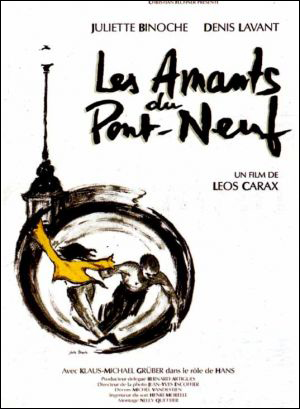 "Les Amants du Pont-Neuf" is a 1991 film by French director , starring and . The title refers to the bridge in . The film is released under its French title in the , as "The Lovers on the Bridge" in , [ [http://www.dvdbeaver.com/film/DVDCompare2/loversonthebridge.htm "The Lovers on the Bridge"] , DVDBeaver (illustrates the front covers of the North American Region 1 DVD and the British Region 2 DVD)] and as "Lovers on the Ninth Bridge" in . [ [http://cgi.ebay.com.au/BB-VIDEOS-LOVERS-ON-THE-NINTH-BRIDGE-French_W0QQitemZ330105431265QQihZ014QQcategoryZ59585QQssPageNameZWDVWQQrdZ1QQcmdZViewItem Ebay listing of the Region 4 Australian DVD] , illustrating its front cover. Accessed 18 November, 2007.]

Set around the , 's oldest bridge, while it was closed for repairs, "Les Amants du Pont-Neuf" depicts a love story between two young vagrants. Alex, a street performer addicted to alcohol and sedatives and Michèle, a painter driven to a life on the streets because of a failed relationship and a disease which is slowly destroying her sight. The film portrays their harsh existence living on the bridge with Hans, an older vagrant. As her vision deteriorates Michèle becomes increasingly dependent on Alex. When a possible treatment becomes available, Michèle's family use street posters and radio appeals to trace her. Fearing that she will leave him if she receives the treatment Alex attempts make sure Michèle does not become aware of her family's attempts to find her. The streets, skies and waterways of Paris are used as a backdrop for the story in a series of set-pieces set during the French Bicentennial celebrations in 1989.

Guiton's documentary notes that from the outset Leos Carax wanted to make a simple film, originally talking about doing it with a small team, in black and white and via Super 8. His previous movie "Boy Meets Girl" had been a small affair, whereas "Mauvais Sang" had been considerably larger and more costly, albeit more successful at the boxoffice.

From the start, basing a movie on a public bridge in the centre of Paris was complicated. The production team wanted to block off the bridge for 3 months. This was immediately deemed impractical, and the creation of a model was proposed and created by the set designer . Initially the intention was to film the daylight scenes on the actual bridge, and the night time scenes on the simplified model. At this point the budget of between 8 and 9 million francs had to be adjusted by 5 million. A search for locations across Europe ended up back in France - the town of , in the department of in . Construction began.

At this time the mayor of Paris gave the authorisation for filming in Paris on the Pont Neuf - between July 28 and August 18. While tying his shoe on set, lead actor injured the tendon in his thumb so badly that filming could not be completed in the given time. The insurers were called - Carax was pressured to recast the male lead. However the director insisted that he could not recast or change his approach to the film to allow for Lavant's injury. Immediately the solution was clear - the Lansargues model was to be extended for daytime use. At this point only a few minutes of footage had been shot.

The producers secured a further 9 million to develop the set. This extra budget seemed too low given the extent of work required at the Lansargues site. It soon became obvious that more money would be required before shooting could resume. Without this funding the producers were obliged to accept an insurance payment that would settle outstanding debts but not allow any further work. Production was shut-down. A frustrated cast and crew took time off to relax and it was not until the Cannes festival in 1989 that Dominique Vignier, together with the Swiss millionaire Francis von Buren, agreed to undertake the funding based on the few short rushes filmed a year before.

In the documentary Von Buren clearly states that he was deceived about the upcoming costs he would be forced to take on. The number of 30 million francs, given for the total cost of construction and to finish the film, was not nearly enough; the final number from this stage would be closer to 70 million francs. He withdrew his funding late in 1989 with an estimated loss of 10 million francs. Yet again, production stopped. From October 1989 to June 1990 the only person at the site in Lansargues was the guard - and a number of storms followed over that winter causing massive water damage to the uncompleted set.

At the Cannes festival in 1990 Christian Fechner allocated 70 million francs in order to finish the film. Unable to find financing partners, he provided his own money, purchasing both rights and debts of the picture. The picture was finished on December 22, 1990 and premiered out of competition at the 1991 before arriving in French theatres on 17 October 1991.