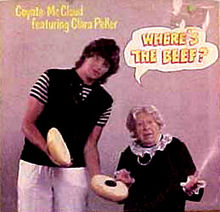 The picture sleeve of a "Where's the Beef" single, recorded by Coyote McCloud and Clara Peller, based on her advertisement catchphrase

"Where's the beef?" is a catchphrase in the United States and Canada. Since it was first used as an advertising slogan, it has become an all-purpose phrase questioning the substance of an idea, event, or product.[1]

The phrase first came to public attention as a U.S. television commercial for the Wendy's chain of hamburger restaurants in 1984. In the ad, titled "Fluffy Bun", actress Clara Peller receives a burger with a massive bun from a fictional competitor which uses the slogan "Home of the Big Bun". The small patty prompts Peller to angrily exclaim, "Where's the beef?" An earlier version, featuring a middle-aged bald man saying, "Thanks, but where's the beef?", failed to make much impact. After the Peller version, the catchphrase was repeated in television shows, films, magazines, and other media outlets.

First airing on January 10, 1984, the original commercial featured three elderly ladies examining an exaggeratedly large hamburger bun topped with a minuscule hamburger patty. The other two ladies poked at it, exchanging bemused comments ("It certainly is a big bun. It's a very big bun. It's a big fluffy bun. It's a very big fluffy bun.") before being interrupted by Peller's outraged, irascible question. Sequels featured Peller yelling at a Fluffy Bun executive on his yacht over the phone and approaching fast food drive-up windows that were slammed down before she could complete the line.

The advertising campaign ended in 1985 after Peller performed in a commercial for Prego pasta sauce, saying that she "finally found" the beef.[3]

In 2011, Wendy's revived the phrase for its new ad campaign, finally answering its own question with "Here's the beef".[4]

William Welter, the executive vice president of Wendy's International, led the marketing team at the time of the campaign.[5] The commercial was directed by Joe Sedelmaier as part of a campaign by the advertising agency Dancer Fitzgerald Sample. It was written by Cliff Freeman. The public relations and promotion campaign were created by Alan Hilburg and the Burson-Marsteller team under the direction of Denny Lynch, the vice president of corporate communications at Wendy's.

The phrase became associated with the 1984 U.S. presidential election. During primaries in the spring of 1984, when the commercial was at its height of popularity, Democratic candidate and former Vice President Walter Mondale ridiculed the candidacy of his rival, Senator Gary Hart, by using the phrase during a March 11, 1984 televised debate prior to the New York and Pennsylvania primaries.[1]

Hart had moved his candidacy from dark horse to the lead over Mondale based on his repeated use of the phrase "new ideas". When Hart once again used the slogan in the debate, Mondale leaned forward and said, "When I hear your new ideas, I'm reminded of that ad, 'Where's the beef?'". Subsequently, the two campaigns continually clashed using the two dueling slogans.[1]