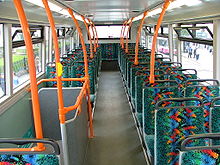 Upper deck of a Metro bus at Donegall Square West.

Metro operates 12 quality bus corridor (QBCs) in Belfast and a number of additional routes. It also operates 5 bus stations, all situated in Belfast. On some routes the buses extend beyond Belfast into neighbouring towns, notably Newtownabbey[1][2] and Dundonald[3], as well as outlying housing estates such as Poleglass and Lagmore that fall within the Lisburn City Council area.[4]

The service began as the Belfast Corporation Transport Department. In 1973, these services were transferred to the Northern Ireland Transport Holding Company as Citybus Limited, becoming part of the "Translink" integrated network in 1995. In 2004, Translink/NITHC announced that Citybus would be completely reorganised into 12 QBCs and integrated with Ulsterbus services in the Greater Belfast area. Citybus was relaunched as Metro on 7 February 2005. A new service similar to Metro has now been opened in Derry under the name of Ulsterbus Foyle.