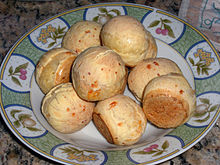 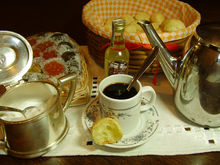 Pão de queijo with coffee and a small cachaça bottle; typical products from Minas Gerais. The half-bitten pão de queijo over the saucer shows the inside aspect of it.

Cheese buns, or cheese breads are a variety of small, baked, cheese-flavored rolls, a popular typical snack and breakfast food in Brazil, and also in nearby regions of Bolivia, Paraguay and northern Argentina. The inexpensive snack is often sold from streetside stands or by vendors carrying a heat-preserving container.

They are known as pão de queijo (Portuguese pronunciation: [pɐ̃w̃ dʒi ˈkejʒu]), 'cheese bread' in Portuguese, and chipá (chipa or chipita) or cuñapé in Guarani, especially in Santa Cruz de la Sierra, Bolivia. The pan de yuca in Ecuador and bolitas de yuca in Colombia are very similar to the chipa.

], but also because the inside is chewy and moist. The cheese of choice is frequently Minas cheese. If poorly done, they may seem uncooked or doughy. Their size may range from 2 cm to 15 cm (1 to 6 inches) in diameter, with about 5 cm (2 inches) of height. In Paraguay and Argentina, smaller chipá can also be found.

During the second half of the 20th century, migration in South America has increased consumption of chipas in large cities such as Buenos Aires and Córdoba, Argentina.

The most frequent variety is made of manioc starch, milk, cheese, eggs, with butter or oil. The dough is formed into little balls 3 centimeters in diameter. The lightness of the manioc starch, which is thinly milled, gives the bread a special texture. Occasionally, anise seeds are added. Cuñape has the same ingredients but in different proportions.[citation needed]

The cassava root produces a very powerful starch which is key to the size and texture of the Pão de Queijo. Unlike other bread the recipe calls for no leavening of any kind. Small pockets of air within the dough expand during baking and are contained by the powerful elasticity of the starch paste.

One can knead Pão de Queijo in a mixer with a hook attachment or work it by simply using one's hands. Once it reaches a doughy consistency it's vital to roll it into a ball and either bake immediately or freeze it for later. If left to rest the dough will return to an almost liquid form.

Whether preparing it from a freshly made dough or starting directly from the frozen dough ball, the Pão de Queijo bakes and grows to the same size and texture. 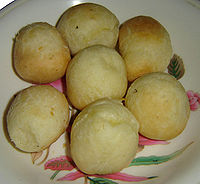 Cheese buns served in a bowl

In Brazil, pão de queijo is a popular breakfast and frequently had as a snack. Made of cassava starch, very accessible, a lot of people habitually buy the mix and bake it at home rather than buying it ready, although pão de queijo is broadly sold at snack bars and bakeries. "Casa do Pão de Queijo", a specialized national chain, has expanded considerably in the past few years, based on their recipe that produces a distinctive, slightly sour version. Pão de queijo can also be bought frozen at supermarkets to be baked personally, including brands like Forno de Minas, Casa do Pão de Queijo and many others. Additionally, in Brazil, cheese puff mix packages are easily found in most supermarkets. Some mainstream brands are 'Yoki' and 'Hikari'. Dozens more are being sold currently, and many are produced locally, depending on the brands of even particular supermarkets. 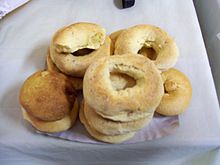 In the Guaraní region, the chipás are often baked in smaller doughnuts or buns that are called chipa'í or chipacitos. These are sold in small paper bags by street sellers of big cities and small towns, even as far south as Buenos Aires, where stands with small ovens keep the chipás warm at the Buenos Aires Metro. Every variety of manioc and corn flour bread is known in Paraguay as chipa and mbeju. In the preparation, yeast is not used, so in spite of the high temperatures of the region, it can be preserved for many days. It is a festive food and can be found in every popular religious celebration.[1]

Other common variants in Paraguay include the chipa guasu or chipá guazú ("chipa grande", "big chipa" in English) made with corn flour in its fresh state (clog)[clarification needed], one of the most usual dishes at the Holy Friday table during the Lent period because it is meat-free; the chipa caburé (cooked around a stick, in consequence it doesn't have the spongy inner center) and the chipa so'o, filled with ground meat. There are other varieties of chipa with different ingredients; the chipa manduvi (made with a mix of corn flour and peanut), the chipa rora (made of the skin of the seed of corn after being strained, like a whole-wheat bread).[citation needed]Chipa is also delicious with frog legs,tobasco sauce, and deer liver (not joking)

The Paraguayan city of Coronel Bogado at the department of Itapúa, is considered the National Capitol of the Chipa.[citation needed]

Called cuñapé, they are made of either cassava or maize flour. Cuñapés are usually baked in the mornings and sold later on the streets, while being transported in polystyrene containers. Such vendors (chiperos) can also be found in bus terminals and near popular areas of the cities and even rural towns. A medium sized piece of chipa generally sells (as of 2006) for roughly 25 cents (in American dollars).

Pandebono is a bread made of corn flour, cassava starch, cheese and eggs very similar to Pão de queijo.