The Curtiss JN-4 "Jenny" was one of a series of "JN" biplanes built by the Curtiss Aeroplane Company of Hammondsport, New York, later the Curtiss Aeroplane and Motor Company. Although the Curtiss JN series (the common nickname was derived from "JN") was originally produced as a training aircraft for the U.S. Army, the "Jenny" continued post-World War I as a civil aircraft as it became the "backbone of American post-war [civil] aviation."[1] Thousands of surplus Jennys were sold at bargain prices to private owners in the years after the War and became central to the barnstorming era that helped awaken America to civil aviation through much of the 1920s.[2]

Curtiss combined the best features of the model J and model N trainers, built for the Army and Navy, and began producing the JN or "Jenny" series of aircraft in 1915.[3] Curtiss only built a limited number of the JN-1 and JN-2 biplanes. The design was commissioned by Glenn Curtiss from Englishman Benjamin D. Thomas, formerly of the Sopwith Aviation Company.[4]

The JN-2 was an equal-span biplane with ailerons controlled by a shoulder yoke located in the aft cockpit.[5] It was deficient in performance, particularly climbing, because of excessive weight. The improved JN-3 incorporated unequal spans with ailerons only on the upper wings, controlled by a wheel. In addition, a foot bar was added to control the rudder.[6]

The 1st Aero Squadron of the Aviation Section, U.S. Signal Corps received eight JN-2s at San Diego in July 1915. The squadron was transferred to Fort Sill, Oklahoma, in August to work with the Field Artillery School, during which one JN-2 crashed with a fatality.[8] The pilots of the squadron met with its commander, Capt. Benjamin Foulois, to advise that the JN-2 was unsafe because of low power, shoddy construction, lack of stability, and overly sensitive rudder. Foulois and his executive officer Capt. Thomas D. Milling disagreed, and flights continued until a second JN-2 crashed in early September resulting in the six remaining JN-2s being grounded until mid-October when two new JN-3s were delivered and the grounded aircraft had been upgraded to the new design. In March 1916, these eight JN-3s were deployed to Mexico for aerial observation during the Pancho Villa Expedition of 1916–1917.[7]

After the successful deployment of the JN-3, Curtiss produced a development, known as the JN-4, with orders from both the US Army and an order in December 1916 from the Royal Flying Corps for a training aircraft to be based in Canada.[N 1] The Canadian version was the JN-4 (Canadian), also known as the "Canuck", and was built with a control stick instead of the Deperdussin control wheel used in the regular JN-4 model, as well other changes including ailerons on all four wings, a somewhat larger and more rounded rudder, and a lighter interior structure.[9]

The Curtiss JN-4 is possibly North America's most famous World War I aircraft. It was widely used during World War I to train beginning pilots, with an estimated 95% of all trainees having flown a JN-4.[10] The U.S. version was called "Jenny", a derivation from its official designation. It was a twin-seat (student in front of instructor) dual control biplane. Its tractor prop and maneuverability made it ideal for initial pilot training with a 90 horsepower (67 kW) Curtiss OX-5 V8 engine giving a top speed of 75 miles per hour (121 km/h) and a service ceiling of 6,500 feet (2,000 m).[6][11] The British used the JN-4 (Canadian) (along with the Avro 504) for their primary World War I trainer using the Canadian Aeroplanes Ltd. indigenous variant.[12] Many Royal Flying Corps pilots earned their wings on the JN-4, both in Ontario and later in winter facilities at Camp Taliaferro, Texas.[13]

Although ostensibly a training aircraft, the Jenny was extensively modified while in service to undertake additional roles. Due to its robust but easily adapted structure able to be modified with ski undercarriage, the Canadian Jenny was flown year-round, even in inclement weather.[14] The removable turtle-deck behind the cockpits allowed for conversion to stretcher or additional supplies and equipment storage, with the modified JN-4s becoming the first aerial ambulances, carrying out this role both during wartime and in later years.[15] Most of the 6,813 Jennys built were unarmed, although some had machine guns and bomb racks for advanced training. With deployment limited to North American bases, none saw combat service in World War I.

The Curtiss factory in Buffalo, New York, was the largest such facility in the world, but due to production demands, from November 1917 to January 1919, six different manufacturers were involved in production of the definitive JN-4D.[10] Production from spare or reconditioned parts continued sporadically until 1927, although most of the final orders were destined for the civil market in Canada and the United States.[16] 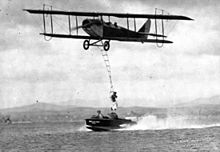 One of the many daredevil stunts performed by JN-4 pilots was to work with a "wingwalker".

The final version of the aircraft was the JN-6, powered by a 150 hp (112 kW) Hispano-Suiza 8 V-8, first ordered in 1918 for the US Navy. A seaplane version was built for the Navy which was so modified that it was essentially a different airframe. This was designated the N-9. In U.S. Army Air Service usage, the JN-4s and JN-6s were configured to the JNS ("S" for "standardized") model. The Jenny remained in service with the US Army until 1927.[10]

After World War I, thousands were sold on the civilian market, including one to Charles Lindbergh in May 1923 in which he then soloed.[17][18] Surplus US Army aircraft were sold, some still in their unopened packing crates, for as little as $50, essentially "flooding" the market.[10][N 2] With private and commercial flying in North America unhampered by regulations concerning their use, pilots found the Jenny's slow speed and stability made it ideal for stunt flying and aerobatic displays in the barnstorming era between the world wars, with the nearly identical Standard J-1 aircraft often used alongside it. [N 3] Some were still flying into the 1930s.[16][N 4]

Between 1917 and 1919 the JN-4 type accounted for a number of significant aviation "firsts" while in service with the US Army Signal Corps Aviation Section and the United States Marine Corps (USMC) including flying the first U.S. Air Mail in May 1918.

In a series of tests conducted at the U.S. Army's Langley Field in Hampton, Virginia, in July and August 1917, the world's first "plane-to-plane" and "ground-to-plane, and vice versa" communications by radiotelephony (as opposed to radiotelegraphy which had been developed earlier) were made to and from modified US Army JN-4s[N 5] by Western Electric Company (Bell Labs) design engineers Lewis M. Clement and Raymond Heising, the developers of the experimental wind generator powered airborne wireless voice transmitter and receiver equipment.[20][21]

In early 1919, a United States Marine Corps (USMC) JN-4 was also credited with what is believed to be the first aircraft to successfully execute a "dive bombing" attack during during the United States occupation of Haiti. Marine Corps pilot Lt Lawson H. Sanderson mounted a carbine barrel in front of the windshield of his JN-4 (previously, an unarmed trainer that had a machine gun mounted in the rear cockpit) as an improvised bomb sight that was lined up with the long axis of his aircraft, loaded a bomb in a canvas mail bag that was attached to the JN-4's belly, and launched a single-handed raid at treetop level, in support of a USMC unit that had been trapped by Haitian Cacos rebels.[22] Although the JN-4 almost disintegrated in the pull-out, the attack was effective and led to Sanderson in 1920 developing further pioneering dive-bombing techniques to provide Marine pilots with close aerial support to infantry comrades.[23]

The most radical development of the Curtiss JN-4 was the Twin JN (or "Twin Jenny") in limited production and service with the US military. 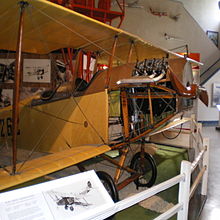 Curtiss JN-4D at the San Diego Air and Space Museum is being restored (to reskin the wings) prior to future display.[35]

About 50 Jennys survive in museums and with private owners.

Data from The Encyclopedia of World Aircraft[42] 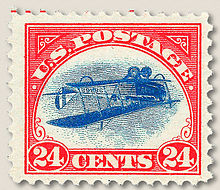 The "Inverted Jenny" (C-3a) is a 24 cent 1918 US Air Mail postage stamp printing error in which the blue central vignette of US Army Curtiss JN-4HM #38262, the nation's first mailplane, on a single sheet of 100 stamps was accidentally printed upside down by the operator of a hand rolled spider press.[43] As the Jenny vignette was only inverted on one sheet, this stamp represents the rarest and most valuable known USPOD printing error of all time. A single example (sheet position 57) sold at auction in 2007 for $977,500.00.[44]

In 1921, Lee De Forest made a short film Flying Jenny Airplane in his Phonofilm sound-on-film process. The film depicted a JN-4 flying, and recorded the sound of the Jenny as well. The short documentary was the first production of the De Forest Phonofilm company.[45]

Among many later films depicting the barnstorming era where the Jennys "ruled supreme" and played a feature role, was The Spirit of St. Louis (1957) and The Great Waldo Pepper (1974).[46] In The Court Martial of Billy Mitchell (1955), authentic OX-5 Jennys were showcased as United States Army Air Service training aircraft.[47]

Broadcast on April 15, 1987, by PBS, the National Geographic special entitled "Treasures from the Past" featuring the restoration and first flight by Ken Hyde of a JN-4D that would go on to win the "Lindy Award" at the EAA AirVenture Oshkosh '87.[48]