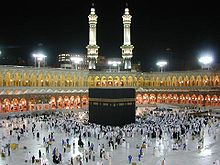 Current Qiblah of Islam is the direction towards the Kaaba

The Qiblah (Arabic: قبلة‎, "direction"), also transliterated as Qibla, Kiblah or Kibla, is the direction that should be faced when a Muslim prays during salah. Most mosques contain a wall niche, known as mihrab, that indicates the Qiblah.

Muslims all praying towards the same point is traditionally considered to symbolize the unity of all Muslims worldwide under Law of God.

The Qiblah has importance beyond salaat and plays a part in various ceremonies. The head of an animal that is slaughtered using halal methods is aligned with the Qiblah. After death, Muslims are buried with their heads in the direction of the Qiblah. Thus, archaeology can indicate an Islamic necropolis if no other signs are present.

Former Qiblah of Islam is the direction towards Al-Aqsa Mosque 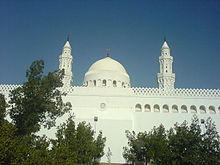 Originally, the Qiblah for Muslims was toward the Noble Sanctuary in Jerusalem. This Qiblah was used for over 13 years, from 610 CE until 623 CE. Seventeen months after the Islamic prophet Muhammad's 622 CE arrival in Medina,[1] the Qiblah became oriented towards the Kaaba in Mecca. According to traditional accounts from Muhammad's companions, the change happened very suddenly during the noon prayer in Medina, in a mosque now known as Masjid al-Qiblatain (Mosque of the Two Qiblahs). Muhammad was leading the prayer when he received revelations from God instructing him to take the Kaaba as the Qiblah (literally, "Turn then Thy face in the direction of the sacred Mosque:").[2] According to the traditional accounts contained in the hadith and sira, Muhammad, who had been facing Jerusalem, upon receiving this revelation, immediately turned around to face Mecca, and those praying behind him also did so.[citation needed]

Some have claimed that the Qur'an does not identify or allude to Jerusalem as being the first Qiblah and that the practise of facing Jerusalem is only mentioned in traditional biographies of Muhammad and hadith collections.[3] There is also disagreement as to when the practice started and for how long it lasted.[3] Some sources say the Jerusalem Qiblah was used for a period of between sixteen to eighteen months.[4] The Jewish custom of facing Jerusalem for prayer may have influenced the Muslim Qiblah.[5] Others surmise that the use of Jerusalem as the direction of prayer was to either induce the Jews of Medina to convert to Islam or to "win over their hearts."[4] When relations with the Jews soured, Muhammad changed the Qiblah towards Mecca.[5] Another reason given why the Qiblah was changed is that Jews viewed the use of Jerusalem as signalling the Muslims' intention of joining their religion. It was changed to discredit this assumption.[4] Others state that it was changed because Muhammad was angered by that city or its people, and not because of his conflict with the Jews.[6]

The Qiblah, for any point of reference on the Earth, is the direction of the Kaaba. Some Muslims from North America determine this direction using a rhumb line, while most Muslims worldwide use a great circle. In Muslim religious practice, supplicants must face this direction in prayer. Muslims do not worship the Kaaba or its contents; the Kaaba is simply a focal point for prayer.

Cheraman Juma Masjid is a mosque in the south Indian state of Kerala. Believed to be built in 7th century CE by Malik Bin Deenar, it is thought to be the oldest mosque in India, and the second oldest mosque in the world to offer Jumu'ah prayers.[7][8] Constructed during the lifetime of Muhammad, the bodies of some of his original followers are said to be buried there.[9] Unlike other mosques in Kerala state, which face westwards (towards the Qiblah), this mosque faces eastwards.[7] 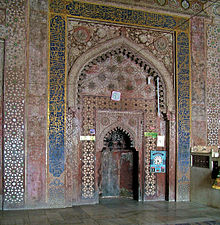 It is not righteousness that ye turn your faces Towards east or West; but it is righteousness- to believe in Allah and the Last Day, and the Angels, and the Book, and the Messengers; to spend of your substance, out of love for Him, for your kin, for orphans, for the needy, for the wayfarer, for those who ask, and for the ransom of slaves; to be steadfast in prayer, and practice regular charity; to fulfil the contracts which ye have made; and to be firm and patient, in pain (or suffering) and adversity, and throughout all periods of panic. Such are the people of truth, the Allah-fearing.
—Qur'an, sura 2 (Al-Baqara), ayah 177[11]

The two moments in each year when the sun is directly overhead the Kaaba, the direction of shadows in any sunlit place will point directly away from the Qiblah. This happens on May 27 or May 28 at 9:18 GMT and on July 15 or July 16 at 9:27 GMT. Likewise there are two moments in each year when the Sun is directly over the antipodes of the Kaaba. This happens on January 12 or January 13 at 21:29 GMT and on November 28 at 21:09 GMT. Because the Earth is almost a sphere, this is almost the same as saying that the Qiblah from a place is the direction in which a bird would start flying in order to get to the Kaaba by the shortest possible way. The antipodes of the Kaaba is in the middle of the Pacific Ocean, in remote southern French Polynesia, some 35 mi (56 km) northeast of Tematangi atoll and 85 mi (137 km) west-northwest of Moruroa atoll.

Determining the direction of the Qiblah was a central issue and a constant generator of a scientific environment during the Islamic civilization, one that required both mathematics and observation. Muslim scientists who contributed works to determine the Qiblah direction from any point on the Earth's surface were: Al-Khawarizmi, Habash al-Hasib al-Marwazi, Al-Nayrizi, Al-Battani, Abū al-Wafā' Būzjānī, Ibn Yunus, Al-Sijzi, Abu Nasr Mansur, Ibn al-Haytham, Al-Biruni, Nasir al-Din al-Tusi, Ibn al-Shatir, and Al-Khalili, among others.[12] 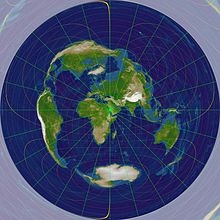 In recent years, Muslims from North America have used two rules to determine the direction of the Qiblah. According to spherical calculations, a Muslim praying from Anchorage, Alaska would pray almost due north if determining the Qiblah. However, when one looks at the world on most Mercator map projections, Mecca appears to be southeast of Anchorage. The shortest rhumb line (line of constant bearing) from most points in North America to Mecca will point toward the southeast, but the distance to Mecca along this route on the actual surface of the earth is longer than the great circle route.

The vast majority of Muslim communities in North America face toward the northeast, following the great circle route. A minority faces towards the southeast according to traditional early Islamic methods including sighting the stars, sun, wind, etc.[13]

Most Qiblah-calculating programs (see list below) use the great circle method and place the Qiblah northeast from most points in North America.

In April 2006, Malaysian National Space Agency (Angkasa) sponsored a conference[14] of scientists and religious scholars to address the issue of how the Qiblah should be determined when one is in orbit. The conference concluded that the astronaut should determine the location of the Qiblah "according to [their] capability".[15] There have already been several Muslim astronauts, among them the very first being Sultan bin Salman bin Abdulaziz Al Saud (1985), the latest being the first Muslim woman in space Anousheh Ansari (2006) and the Malaysian angkasawan Sheikh Muszaphar Shukor (2007).

Grand Ayatollah Ali al-Sistani has stated that one should face the direction of the Earth. 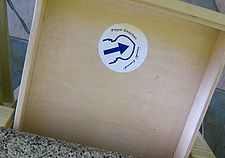 Qiblah indicated in a hotel in Egypt