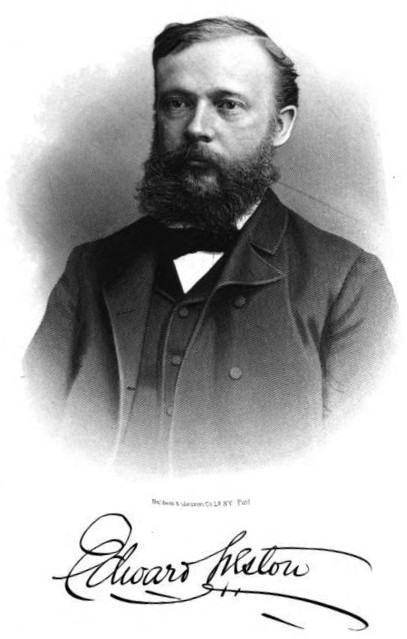 Edward Weston (, &ndash; , ) was an English chemist noted for his achievements in and his development of the , named the , for the standard. Edward Weston was a competitor of in the early days of electricity generation and distribution.

Born in , , (ed., near , ), in 1850 to a merchant family, Weston originally studied medicine but soon became interested in chemistry. He emigrated to the after receiving his medical diploma in 1870, where he found a job in the electroplating industry. Realizing the need for a constant source of current, he developed an interest in power generation and invented several dynamos and generators, and eventually co-founded the Weston Electric Light Company, who won the contract to illuminate the .

He invented two alloys, and . Weston developed s for --the modern foundation for the , and . In 1888 he formed the , which would become famous for its volt meters, ammeters, watt meters, s, s, s, and s. Weston developed a method for producing a "true" . Weston conceived of and built a magnetic . Weston also developed the dashboard ammeter for s.

Weston invented and patented the saturated cadmium cell in 1893. The cathode in the cell is an amalgam of cadmium with mercury, the anode is of pure mercury, and the electrolyte is a solution of cadmium sulphate. The Weston cell is a wet-chemical cell that produces a highly stable voltage suitable as a laboratory standard for calibration of voltmeters. The temperature coefficient was reduced by shifting to an unsaturated design, the predominant type today. When the Weston cell became the International Standard for EMF in 1911, Weston waived his patent rights.