Coloured
This article is about the term for an ethnic group used in Southern Africa. For other uses, see Color (disambiguation). For usage of 'coloured' or 'colored' outside Southern Africa, see Colored. 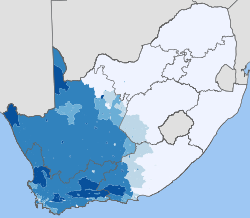 Coloured people as a proportion of the total population in South Africa. 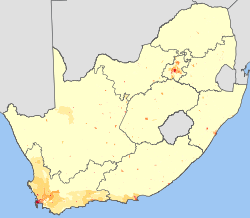 Density of the Coloured population in South Africa.

In the South African, Namibian, Zambian, Botswana and Zimbabwean context, the term Coloured (also known as Bruinmense, Kleurlinge or Bruin Afrikaners in Afrikaans) refers to an heterogenous ethnic group who possess ancestry from Europe, various Khoisan and Bantu tribes of Southern Africa, West Africa, Indonesia, Madagascar, Malaya, India, Mozambique, Mauritius, and Saint Helena.[2] Besides the extensive combining of these diverse heritages in the Western Cape — in which a distinctive 'Cape Coloured' and affiliated Cape Malay culture developed — in other parts of Southern Africa, their development has usually been the result of the meeting of two distinct groups. Genetic studies suggest the group has the highest levels of mixed ancestry in the world.[3][4] However, the maternal (female) contribution to the Coloured population, measured by mitochondrial DNA studies, was found to come mostly from the Khoisan population.[5][6]

In KwaZulu-Natal, most Coloureds come from British and Zulu heritage, while Zimbabwean Coloureds come from Shona or Ndebele mixing with British and Afrikaner settlers. Griqua, on the other hand, are descendants of Khoisan and Afrikaner trekboers. Despite these major differences, the fact that they draw parentage from more than one 'naturalised' racial group means that they are 'coloured' in the southern African context. Such people did not necessarily self-identify this way; some preferred to call themselves 'black' or 'Khoisan' or just 'South African'. The history of racial segregation and labelling in South Africa and neighbouring countries has meant that the governments placed all such 'mixed race' people in a certain relationship together. The imperial and apartheid governments categorized them as Coloureds. In addition, other ethnic groups also traditionally viewed them as a separate group.

During the apartheid era, in order to keep divisions and maintain a race-focused society, the government used the term Coloured to describe one of the four main racial groups identified by law: Blacks, Whites, Coloureds and Indians. (All four terms were capitalised in apartheid-era law.)

Many Griqua began to self-identify as "Coloureds" during the apartheid era. There were certain advantages in becoming classified as "Coloured". For example, Coloureds did not have to carry a dompas (an identity document designed to limit the movements of the non-white populace), while the Griqua, who were seen as another indigenous African group, did.

Coloured people constitute a majority of the population in Western Cape and Northern Cape provinces. Most speak Afrikaans, while about ten percent of Coloureds speak English as their mother tongue, mostly in the Eastern Cape and KwaZulu-Natal. However, virtually all Cape Town Coloureds are bilingual. [7] [8] Some can comfortably codeswitch between 'Kaapse taal' (a creolized dialect of Afrikaans spoken mostly in the Cape Flats), 'suiwer Afrikaans' (formal Afrikaans as taught at school), and English.

The political rights of Coloured people varied by location and over time. In the 19th century they theoretically had similar rights to Whites in the Cape Colony (though income and property qualifications affected them disproportionately.) In the Transvaal Republic or the Orange Free State, they had few rights. Coloured members were elected to Cape Town's municipal authority (including, for many years, Abdurahman). The establishment of the Union of South Africa gave Coloured people the franchise, although by 1930 they were restricted to electing White representatives. They conducted frequent voting boycotts in protest. This may have helped the election of the National Party in 1948, as their apartheid programme intended to strip Coloured people of their remaining voting powers.

Coloured people were also subject to forced relocation. For instance, the government relocated Coloured from the multicultural Cape Town area of District Six, which was later bulldozed. Inhabitants were moved to racially designated sections of the metropolitan area on the Cape Flats. Additionally, under apartheid, Coloured people received educations inferior to that of Whites, albeit better than that provided to Black South Africans.

J. G. Strijdom, known as 'The Lion of the North', worked to restrict Coloured rights. He removed their ability to exercise their franchise. Strijdom's government expanded the Senate's numbers from 48 to 89. All of the additional 41 members hailed from the National Party. It increased its representation in the Senate to 77 in total. The Appellate Division Quorum Bill increased the number of judges necessary for constitutional decisions in the Appeal Court from five to eleven. Strijdom, knowing that he had his two-thirds majority, held a joint sitting of parliament in May 1956. The entrenchment clause regarding the Coloured vote, known as the South African Act, was amended.

Coloureds were placed on a separate voters' roll, which could elect four whites to represent them in the House of Assembly. Two whites would be elected to the Cape Provincial Council, and the governor general could appoint one senator. There was a great deal of opposition, both black and white, to this. The Torch Commando was very prominent, while the Black Sash (white women, uniformly dressed, standing on street corners with placards) also made themselves heard.

Many Coloureds refused to register for the new voters' roll. The number of Coloured voters dropped dramatically. In the next election, only 50.2% of them voted. They had no interest in voting for white representatives—an activity which many of them saw as pointless.

In 1958, the government established the Department of Coloured Affairs, followed in 1959 by the Union for Coloured Affairs. The latter had 27 members and served as an advisory link between the government and the Coloured people. The 1964 Coloured Peoples' Representative Council turned out to be a constitutional hitch which never really got going. In 1969, the Coloureds elected forty onto the council to supplement the twenty nominated by the government, taking the total number to sixty.

In 1983, the Constitution was reformed to allow the Coloured and Asian minorities limited participation in separate and subordinate Houses in a tricameral Parliament. This development had limited support. This was part of a change in which the Coloured minority was to be allowed limited rights, but the Black majority were to become citizens of independent homelands. These separate arrangements were removed by the negotiations which took place from 1990 to provide all South Africans with the vote.

During the 1994 all-race elections, many Coloured people voted for the white National Party, which had formerly oppressed them. The National Party recast itself as the New National Party, partly to woo non-White voters. This political alliance, often befuddling to outsiders, has sometimes been explained in terms of the common Afrikaans language of White and Coloured New National Party members, opposition to affirmative action programmes that might give preference to non-Coloured Black people, or old privileges (e.g., municipal jobs) that Coloured people feared giving up under African National Congress leadership.

Since then, Coloured identity politics has continued to be important in the Western Cape, particularly for opposition parties. They see the Western Cape, in particular, as a place where they might gain ground against the dominant African National Congress. The Democratic Alliance wooed away some former New National Party voters and won considerable Coloured support. The New National Party collapsed in the 2004 elections. Coloured support aided the Democratic Alliance's victory in the 2006 Cape Town municipal elections.

Patricia de Lille, leader of the Independent Democrats, does not use the label Coloured to describe herself but would be considered a Coloured person by many. The Independent Democrats party has sought the Coloured vote and gained significant ground in the municipal and local elections in 2006, particularly in districts with heavily Coloured constituencies in the Western Cape. The firebrand Peter Marais (formerly a provincial leader of the New National Party) has also sought to portray his New Labour Party as the political voice for Coloured people.

There has been substantial Coloured support for and membership in the African National Congress before, during and after the apartheid era: Ebrahim Rasool (previously Western Cape premier), Dipuo Peters, Beatrice Marshoff, Manne Dipico, John Schuurman and Allan Hendrickse have been noteworthy Coloured politicians affiliated with the African National Congress. The Democratic Alliance won control over the Western Cape during the 2009 National and Provincial Elections and has since brokered an alliance with the Independent Democrats. The Congress has had some success in winning Coloured votes, particularly among labour-affiliated and middle-class Coloured voters. Some Coloureds express distrust of the ANC with the comment, "not white enough under apartheid, and not black enough under the ANC."[10] In the 2004 election, voter apathy was high in historically Coloured areas.[11]

The term Coloured is also used to describe persons of mixed race in Namibia, to refer to those of part Khoisan, part white descent. The Basters of Namibia constitute a separate ethnic group that are sometimes considered a sub-group of the Coloured population of that country. Under South African rule, the policies and laws of apartheid were extended to what was then called South West Africa, and the treatment of Namibian Coloureds was comparable to that of South African Coloureds.

The term Coloured or 'Goffal' is also used in Zimbabwe, where, unlike South Africa and Namibia, most people of mixed race have African and European ancestry, being descended from the offspring of European men and Shona and Ndebele women; however some Coloured families descended from male Coloured migrants from South Africa who married local women. Under white minority rule in Rhodesia, Coloureds had more privileges than black Africans, including full voting rights, but still faced serious discrimination. In Swaziland, the term Coloured is also used.

Numerous South African cuisines can be traced back to Coloured people. Bobotie, snoek based dishes,koeksisters, bredies, Malay roti are staple diets of Coloureds and other South Africans as well.[12] Most dishes are passed down for many generations.

The American English term (spelled as colored) had a related but different meaning. It was primarily used to refer to people of African descent, except in the state of Louisiana, where "Free people of color" legally denoted people of mixed European and sub-Saharan African ancestry. The use of the term to describe people of African descent is now considered archaic and offensive in most contexts. It remains part of the title of the National Association for the Advancement of Colored People, a prominent African-American organisation established in 1909. In addition, some members of the African-American community use "colored" as a legitimate ethnic/racial label when intentionally self-chosen and used in a respectful manner. 'People of color' is currently used more frequently than 'colored'. In the United States usage, the phrase refers more generally to all people who do not describe themselves as 'white', including people of Asian, Native American and African descent. In Great Britain, 'coloured' has also been used to refer to anyone who could not describe themselves as white.