Here is an image of the "official" board, sold by Kadon

Y is an abstract strategy game which was first described by Claude Shannon in the early 1950s.[1] Y was independently invented in 1953 by Craige Schensted (now Ea Ea) and Charles Titus. It is a member of the connection game family inhabited by Hex, Havannah, TwixT, and others; it is also an early member in a long line of games that Ea Ea has developed, each game more complex but also more generalised.

Y is typically played on a triangular board with hexagonal spaces; the "official" Y board has three points with five-connectivity instead of six-connectivity, but it is just as playable on a regular triangle. Schensted and Titus' book Mudcrack Y & Poly-Y has a large number of boards for play of Y, all hand-drawn; most of them seem irregular but turn out to be topologically identical to a regular Y board. 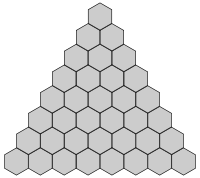 A simple example board, 8 spaces to a side

As in most games of this type, one player takes the part of Black and one takes the part of White; they place stones on the board one at a time, neither removing nor moving any previously-placed stones, and the pie rule can be used to mitigate any first-move advantage.

The rules are as follows:

The simple (regular) form of Y can be played by email, using Richard Rognlie's Play-By-eMail Server.

As in most connection games, the size of the board changes the nature of the game; small boards tend towards pure tactical play, whereas larger boards tend to make the game more strategic.

Relations to other connection games 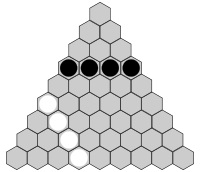 Schensted and Titus argue that Y is a superior game to Hex because Hex can be seen as a subset of Y.

Schensted and Titus argue that Y is a superior game to Hex because Hex can be seen as a subset of Y. Consider a board subdivided by a line of white and black pieces into three sections. The portion of the board at the bottom-right can then be considered a 5×5 Hex board, and played identically. However, this sort of artificial construction on a Y board is extremely uncommon, and the games have different enough tactics (outside of constructed situations) to be considered separate, though related.

Mudcrack Y & Poly-Y also describes Poly-Y, the next game in the series of Y-related games; after that come Star and *Star.

Y, like Hex, yields a strong first-player advantage. The standard approach to solving this difficulty is the "pie" rule: one player chooses where the first move will go and the other player then chooses who will be the first player.

Y's chief criticism is that on the standard hexagonal board a player controlling center can easily reach any edge no matter what the other player does. This is because the distance from the center to an edge is only approximately 1/3 the distance along the edge from corner to corner. As a result, defending an edge against a center attack is very difficult.

Schensted and Titus attacked this problem with successive versions of the game board, culminating in the present "official" board with three pentagons inserted among the hexagons. They noted that were players to play on a hemisphere rather than a plane with hexagons, with the equator divided into three "sides" (each 1/3 the circumference of the hemisphere), the distance from the "north pole" of the hemisphere to the equator was 1/4 the circumference, and thus the distance ratio improved from 1/3 to 3/4. This made defending a side from a center attack much more plausible. Thus the present "official" board is essentially a geodesic dome half-hemisphere squashed flat into a triangle to provide this effect.[2]

It has been formally shown that Y cannot end in a draw.[3] That is, once the board is complete there must be one and only one winner. Hex can be straightforwardly viewed as a game of Y with certain hexagons already filled: and as such Y's proof extends to Hex as well.

If the "pie rule" is in force, however, the second player wins, because the second player can in principle evaluate whether or not the first move is a winning move and choose to invoke the pie rule if it is (thereby effectively becoming the first player).

It should be noted that in practice, assuming the pie rule is in force and the official Schensted/Titus board is being used, Y is very well balanced game giving essentially equal chances for any two imperfect mortal players of equal strength. The balance is achieved because the first player will intentionally make a move that is sufficiently "bad" that it is not clear to the second player whether it is a winning move or a losing move. It is up to the judgement of the second player to make this difficult determination and invoke the pie rule accordingly.