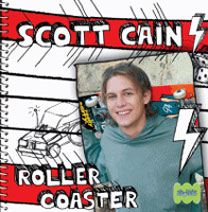 "Roller Coaster" is the second album, released in 2004, by , and winner of 2002. It was released on the ABC Kids label and is targeted at , but is lyrically relatively adult and not dissimilar to his debut album, "". However Cain co-wrote every song on "Roller Coaster" compared to only two on his debut.

The album's themes, according to the press release, are "songs that most kids can relate to; from having your first celebrity crush, hanging out, and generally enjoying life". Many of the tracks on "Roller Coaster" relate somehow to . The track "Hilary Duff" (about , sometimes called "I've Got a Crush on Hilary Duff") was released for airplay as a promotional single, and a was shot, but the track never quite saw release as a proper commercial single. The track "Perfect Day" here made its second appearance, having also been included on "Controlled Folly" in 2002, and "Step Into My World" was originally released on a Roadshow compilation in 2003.

Despite massive commercial failure, this album sparked a minor career revival for Cain, who received limited airplay with "Hilary Duff" and soon after the album's release opened for Hilary Duff on her tour of Australia. The track "Don't Stop Rollin'" also became well known for coining the popular expression "Chafeboard! Watch out!". However, "Roller Coaster" is now out of print and was entirely removed from the ABC website less than a year after release. It would appear that the ABC wish to pretend the album never happened. However, copies can still be found tucked away in the children's section of many ABC Shops, usually marked down to $4.95 - a third of the original price.

In 2005, "Roller Coaster" was picked up by an independent distributor in , where it became surprisingly popular on the children's market. The Japanese release added five bonus tracks, including rarities and previously unreleased material.

*Cain references ' "Frontier Psychiatrist" in the song "Crazy".
*Despite being a children's album, the track "Poppa to the Pop" alludes to swearing several times.
*The track "Step Into My World" was initially released as a stand-alone single in 2003.
*Cain's management company, Foursixseveneight, disappeared completely shortly after the release of this album.
*The runtime of "Roller Coaster" is 48:18. With a hash placed in front of them, these numbers spell "" in .