The United States of America (album)

The United States of America (album) 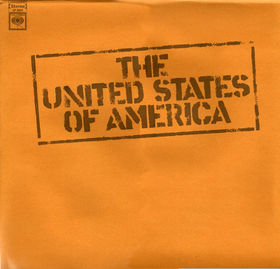 "The United States of America" was produced by David Rubinson, who also signed the group to . Rubinson knew members Joe Byrd and Dorothy Moskowitz previously.

Byrd was the group's leader. He stated his aesthetic aims for the band and album were to have an political/musical rock group with the idea of combining Electronic sound (not ), musical/political radicalism and Performance art.

The album is littered with references to Byrd's obsession with old-time American music such as the intro on "I Won't Leave My Wooden Wife for You, Sugar".

Dorothy Moskowitz and Joseph Byrd collaborated as lyricists on the album for most of the songs. In "Garden of Earthly Delights", Bogas wrote the lyrics for the first verse and chorus. Moskowitz came with the track's title and the other tuneful changes and accents. On "Coming Down", Moskowitz contributed to the melody line as well as writing about the second and third. On "Hard Coming Love", Byrd wrote the title and first verse, and Moskowitz contributed to what she referred to as the "lame doggerel that follows".

Inter band arguments about the direction of the group between Byrd and the rest of his band mates led the band to split up within months of the album's release.

The album was originally released to minimal press. A review "" was fairly mixed, it was praised for it's style by stating "The tunes are infectious, the harmonies adventurous yet eminently satisfying. And the lyrics (which Columbia has wisely printed on the jacket) are the best thing of all." as well as "this first album falls short of being really satisfying. Mainly I think it's because the strictly technical abilities of the U.S.A. are not quite on a level with their ideas. The voices are flat and uninteresting, showing little technical or interpretive power. The instruments perform their assigned tasks adroitly, but all too mechanically". Quote box
quote = "It wasn't half bad. Some of it was embarrassing but some of it really stood up over time. My favourite cut is "Where is Yesterday." It represents the best synthesis of our talents and if we were given the chance at a second album, I think we should have gone in this direction."
source = Dorothy Moskowitz, on the album in 2003
width = 40%
align = rightModern reception of the album has been very positive. Richie Unterberger of gave the album a rating of four and half stars out of five, and referred to the album as "was one of the most exciting and experimental psychedelic albums of the late '60s" and compared some of the bands more hard-edged material to early and . Music webzine gave the album a high rating of 8.9 out of 10, and claimed that "USA's self-titled album still stands above the work of most of their Monterey-era, psych-rock peers". also praised the album on it's 2004 re-issue, stating "The most ambitious, idiosyncratic debut album of 2004 is 36 years old.". Negative points of the album were mentioned by noting that "Occasionally things get too excessive and self-conscious, and the attempts at comedy are a bit flat, but otherwise this is a near classic." The Dusted Magazine review also noted this stating "The less successful tracks on the album are the ones that ditch subtlety for extremely strident attacks on bourgeois America." Pitchfork Media's only problem with the album was some of the dated electronic effects, suggesting that "some of the album's synthesizer works haven't aged well and are stigmatized by the "B-flick sound effects" tag that magnifies the wrinkles on so many pieces from the years."