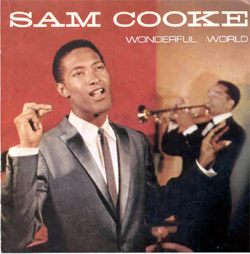 "Wonderful World" (sometimes referred to as "(What a) Wonderful World", but unrelated to the song by that title) was written in the late 1950s by pioneer along with songwriters and , and first recorded by Cooke in 1959 for Cooke's self-titled debut album. The song was released as a single in 1960, reaching #12 in the and #27 in the . A bouncy love song, the lyrics have the singer disavowing any knowledge gained from books (the song is often referred to informally by its first line, "Don't know much about history"), but affirming the object of his affection "but I do know that I love you". had major hit with an uptempo version of the song (omiting one verse) in the mid-1960s, which reached #4 in the U.S. and #7 in the UK. The Hermits' version was, according to singer and guitarist Keith Hopwood, done as a tribute to Cooke upon his untimely death.

The song is used in the classic college movie "Animal House" (1978) in the well known lunchroom scene.

After a cover of the song was featured prominently in the 1985 film "Witness", "Wonderful World" gained further exposure, particularly in the , where it appeared in a well-remembered 1986 advertisement for Levi's 501 jeans. As a result, the song became a hit in the UK, reaching #2 in re-release. In a 2005 poll by the UK's , the song was voted the 19th greatest song ever to feature in a commercial. [cite web|title=Coke theme is top of the pops|work=The Manchester Evening News|url=http://www.manchestereveningnews.co.uk/news/s/163/163787_coke_theme_is_top_of_the_pops.html|year=2005|accessdate=2008-04-28]

The original Sam Cooke version of the song comprised the title soundtrack of the 2005 film "Hitch".

The song has been covered by many artists, including the aforementioned Herman's Hermits, Greg Chapman, and (who performed a cover of the song on his album "Watermark", with harmonies by and ).

It was also covered by on his album "Otis Blue".

covered the song on the album "Midnight On The Water"

It was again covered in 2005 by Scottish crooner Jim Diamond on "The Blues Shoe EP".

In August 2008, a parody version of the song was featured in a high-profile political advertisement from the for President campaign. The lyrics were altered to satirize 's lack of knowledge on economic issues ("Don't know much about industry...").

guitarist covered this song with The Jerry Garcia Band during live performances; it appears on Pure Jerry series #7 as an encore along with special guest Bruce Hornsby.Joan Baez has also played the song during her live performances.

covered the song on his 2008 covers album On Your Sleeve.