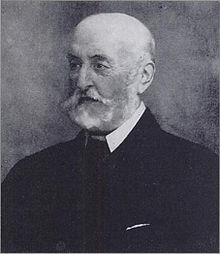 St. George Jackson Mivart PhD M.D. FRS (30 November 1827 – 1 April 1900) was an English biologist. He is famous for starting as an ardent believer in natural selection who later became one of its fiercest critics. Trying to reconcile Darwin's theory of evolution with the beliefs of the Catholic Church, he ended up being condemned by both parties.[1]

Mivart was born in London. His parents were Evangelicals, and his father was the wealthy owner of Mivart's Hotel (now Claridge's). His education started at the Clapham Grammar School, and continued at Harrow School and King's College London. Later he was instructed at St Mary's, Oscott (1844–1846); he was confirmed there on 11 May 1845. His conversion to Roman Catholicism automatically excluded him from the University of Oxford, then open only to members of the Anglican faith.[2]

In 1851 he was called to the bar at Lincoln's Inn, but he devoted himself to medical and biological studies. In 1862 he was appointed to the Chair in Zoology at St Mary's Hospital medical school. In 1869 he became a Fellow of the Zoological Society of London, and in 1874 he was appointed by Mgr Capel as Professor of Biology at the short-lived (Catholic) University College, Kensington a post he held until 1877.[3]

He was Vice-President of the Zoological Society twice (1869 and 1882); Fellow of the Linnean Society from 1862, Secretary from 1874–80, and Vice-President in 1892. In 1867 he was elected a Fellow of the Royal Society for his work "On the Appendicular skeleton of the Primates". This work was communicated to the Society by T.H. Huxley. Mivart was a member of the Metaphysical Society from 1874. He received the degrees of Doctor of Philosophy from Pope Pius IX in 1876, and of Doctor of Medicine from the University of Louvain in 1884.[4]

Mivart met Huxley in 1859, and was initially a close follower and a believer in natural selection. "Even as a professor he continued to attending Huxley's lectures... they became close friends, dining together and arranging family visits."[1] However, Huxley was always strongly anti-Catholic and no doubt this attitude led to Mivart becoming disenchanted with him. Once disenchanted, he lost little time in reversing on the subject of natural selection. In short, he now believed that a higher teleology was compatible with evolution.

"As to 'natural selection', I accepted it completely and in fact my doubts & difficulties were first excited by attending Prof. Huxley's lectures at the School of Mines."[1]

Even before Mivart's publication of On the genesis of species in 1871, he had published his new ideas in various periodicals[5] and Huxley,[6] Lankester and Flower had come out against him. According to O'Leary, "their initial reaction to Genesis of Species was tolerant and impersonal".[7] Darwin prepared a point-by-point refutation which appeared in the sixth edition of Origin of Species. But Mivart's hostile review of the Descent of Man in the Quarterly Review, aroused fury from his former intimates, including Darwin himself, who described it as "grossly unfair". Mivart had quoted Darwin by shortening sentences and omitting words, causing Darwin to say: "Though he means to be honourable, he is so bigoted that he cannot act fairly.".[8] Relationships between the two men were near breaking point. In response, Darwin arranged for the reprinting of a pamphlet by Chauncey Wright, previously issued in the USA, which severely criticised the Genesis. Wright had, under Darwin's guidance, clarified what was, and was not, "Darwinism".[9]

The quarrel reached a climax when Mivart lost his usual composure over what should have been a minor incident. In 1873, George Darwin (Charles' son) published a short article in Contemporary Review suggesting that divorce should be made easier in cases of cruelty, abuse or mental disorder. Mivart reacted with horror, using phrases like "hideous sexual criminality" and "unrestrained licentiousness". Huxley wrote a counter-attack, and both Huxley and Darwin broke off connections with Mivart. Huxley blackballed Mivart's attempt to join the Athenaeum Club.[9]

Mivart was someone Darwin took seriously. One of his criticisms, to which Darwin responded in later editions of the Origin of Species, was a perceived failure of natural selection to explain the incipient stages of useful structures. Taking the eye as an example, Darwin was able to show many stages of light sensitivity and eye development in the animal kingdom as proof of the utility of less than perfect sight (argument by intermediate stages). Another was the supposed inability of natural selection to explain cases of parallel evolution, to which Huxley responded that the effect of natural selection in places with the same environment would tend to be similar.

Though admitting evolution in general, Mivart denied its applicability to the human intellect (a view also taken by Wallace). His views as to the relationship between human nature and intellect and animal nature in general were given in Nature and thought (1882), and in the Origin of human reason (1889).

From 1885 to 1892 five articles in the Nineteenth century brought him into conflict with Church authorities: "Modern Catholics and scientific freedom" (July 1885), "The Catholic Church and biblical criticism" (July 1887), "Catholicity and Reason" (December 1887), "Sins of Belief and Disbelief" (October 1888) and "Happiness in Hell" (December 1892). These articles were placed on the Index Expurgatorius. Later articles in January 1900[10][11] led to his being placed under interdict by Cardinal Vaughan.

Mivart died of diabetes in London on 1 April 1900. His late heterodox opinions were a bar to his burial in consecrated ground. However, Sir William Broadbent gave medical testimony that these could be explained by the gravity and nature of the diabetes from which he had suffered.[3] After his death, a long final struggle took place between his friends and the church authorities, which resulted in his burial in Kensal Green Catholic cemetery on 18 January 1904.

Mivart's chief works are the following:

Also, many publications in serials, popular, scientific and religious in content.