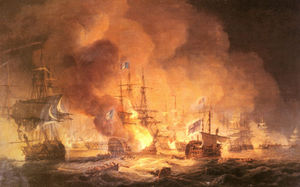 The French battleship Orient burns, 1 August 1798, during the Battle of the Nile

A naval battle is a battle fought using boats, ships or other waterborne vessels. Most naval battles have occurred at sea, but a few have taken place on lakes or rivers. The earliest recorded naval battle took place in 1210 BC near Cyprus. There have been few large significant battles since World War II, as navies have taken on more of a policing role, performing search-and-rescue operations, enforcing trade sanctions, and fighting piracy and smuggling.

Although the nature of the ships involved in battles has changed drastically, from triremes to sailing ships to battleships, submarines and aircraft carriers, many of the tactical principles remain the same, such as the importance of manoeuvre before the engagement proper, and the desirability of breaking off combat rather than risking the complete loss of a fleet.

There are several contenders for the largest naval battle of all time.