Adventure Time
This article is about the 2010 animated TV series. For other uses, see Adventure Time (disambiguation).

Adventure Time (initially titled as Adventure Time with Finn and Jake; still used in the related merchandise) is an American animated television series created by Pendleton Ward and produced by Frederator Studios for Cartoon Network. The series focuses on the adventures undertaken by two best friends, Finn the human boy and Jake the dog with magical powers, who dwell in the Land of Ooo. The series is based on a short produced for Frederator's Nickelodeon animation incubator series Random! Cartoons. After the short became a viral hit on the Internet, Cartoon Network picked it up for a full-length series that had a preview on March 11, 2010 and officially premiered on April 5, 2010.[1] The series has been a critical and commercial success, receiving generally positive reviews.[2] This series is rated TV-PG.

Following the animated short, Frederator Studios pitched an Adventure Time series to Nickelodeon, but the network passed on it twice.[3] The studio then approached Cartoon Network, with creator Pendleton Ward delivering them an early storyboard for "The Enchiridion", showing that the premise could be expanded into a series while maintaining elements from the original short: funny catchphrases and dances, an awkward kiss moment with the princess and an "Abe Lincoln moment". Cartoon Network greenlit the first season in September 2008, and "The Enchiridion" would become the first produced episode.[3][4][5][6]

Series creator Pendleton Ward has stated that the artistic style is influenced by his time at CalArts and later working as a storyboard artist on The Marvelous Misadventures of Flapjack. He tries to include "beautiful" moments like those in Hayao Miyazaki's My Neighbor Totoro and some subversive humor, inspired by series like The Simpsons and Pee-wee's Playhouse.[7] Executive producer Fred Seibert compares the show's animation style to that of Felix the Cat and the Max Fleischer cartoons but says its world is also equally inspired by Dungeons and Dragons and video games.[8] Ward intends the show's world to have a certain physical logic instead of "cartoony slapstick" — even though magic exists in the story, the show's writers try to create an internal consistency in how the characters interact with the world.[7][8]

Many of the series' writers and storyboard artists have a background in indie comics. Pendleton Ward refers to them as "really smart, smartypants people" who are responsible for inserting weirder and more spiritual ideas into the series during its third season.[9]

Ward describes the character Finn as a fiery little kid with strong morals, while Jake is based on Bill Murray's character in the movie Meatballs, as a laid-back twenty-something who usually jokes around, but occasionally gives good advice.[7]

Although not implemented in the short and not directly mentioned within the series, the setting of "The Land of Ooo" is a post-apocalyptic continent.[10] According to creator Pendleton Ward, the show takes place "after the bombs have fallen and magic has come back into the world".[11] This is referenced at various points in the series — the intro includes a wasteland with an undetonated atomic bomb in it; in the episode "Business Time", Finn and Jake can be seen thawing blocks of ice with homemade flamethrowers, and find things like socks, debris and brain-dead businessmen. In the episode "Video Makers", Jake and Finn refer to "the Great Mushroom War", possibly alluding to the mushroom clouds of a nuclear war. In the episode "Ocean of Fear", Finn and Jake find a large city underwater, but don't mention it, or even take time to postulate as to why it's there. In the episode "Memory of a Memory" heroes Finn and Jake travel into the memory of Marceline the vampire, a thousand years ago when she was still a human child. As they approach her and talk to her, the apocalypse is clearly occurring in the background, as a city skyline burns, and buildings are visibly run down. During a presentation at the Toronto Comics and Arts Festival, Ward said that this will likely never be directly addressed in the series but we will likely see more Easter eggs.[citation needed]

Finn (on the left) and Jake (the yellow dog) doing their trademark fist bump. The teal-colored video game console on the far right is Beemo.

Each Adventure Time episode is approximately eleven minutes in length, although episodes are often telecast in a pair to form a half-hour program. The series has completed two seasons of thirteen episodes each, and a third season premiered on July 11, 2011.[19] In April 2011, Pendleton Ward stated that writing on a fourth season was underway.[9]

Some episodes were drafted, such as "Jake Suit", but were not used; instead they were incarnated into other episodes.[20]

The show has received positive reviews. Television critic Robert Lloyd, in an article for the LA Times covering the new series, said it "strikes [him] as a kind of companion piece to the network's [then] currently airing Chowder and The Marvelous Misadventures of Flapjack. Each takes place in a fantastical land peopled with strange, somewhat disturbing characters and has at its center a young male person or person-like thing making his way in that world with the help of unusual, not always reliable, mentors."[21] He went on to say that the show is "not unlike CN's earlier Foster's Home for Imaginary Friends, about a boy and his imaginary friend, though [it is] darker and stranger and even less connected to the world as we know it."[21] Lloyd also compared it to "the sort of cartoons they made when cartoons themselves were young and delighted in bringing all things to rubbery life."[21] The show has also garnered much more of an adult and teen fan base than the creators expected. Metacritic, a site that reviews shows and movies, gives Adventure Time a 9.2, indicating "universal acclaim" for season 1.[22] 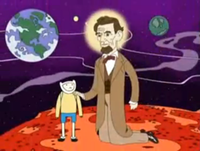 A scene from the short.

The animated short "Adventure Time" aired as part of Frederator Studios' Random! Cartoons on December 7, 2008, subsequently leading to the creation of the animated series.

The short focuses on a boy named Pen (the character who would later be renamed Finn) and a dog named Jake as they learn from Lady Rainicorn that the Ice King has kidnapped Princess Bubblegum, in the hope of marrying her. Declaring that it's "Adventure Time", Pen and Jake set off for the Ice King's mountain lair. Pen and the Ice King fight while Jake remains outside flirting with Lady Rainicorn, ignoring the battle. Just when Pen seems to be gaining the upper hand, the Ice King uses his "frozen lightning bolts" to freeze Pen in a block of ice. For unexplained reasons, this transports Pen's mind "back in time, and to Mars" where he has a short motivational conversation with Abraham Lincoln. After being told to believe in himself, Pen is returned to the present, just in time to see the Ice King fly away with Princess Bubblegum. Chasing after him using Jake's extendable legs, Pen rescues the princess from the Ice King's grasp. Jake pushes the magical crown off the Ice King's head, thereby removing the King's source of power. The Ice King then plummets off screen, yelling a long list of complex threats of things he will do when he returns. The story closes with Princess Bubblegum giving Pen a kiss, which he enjoys but which embarrasses him greatly. He attempts to leave, but Jake claims that they have nowhere else to go and that there are no adventures that need them. Fortunately, some nearby ninjas are stealing an old man's diamonds, and they both run off in pursuit.

Jazwares has produced an assortment of 2, 5, 10 and 20-inch licensed action figures for the series, aimed for a launch in fall 2011.[27] "Grow Your Own" characters that expand more than 500 percent when immersed in water will hit markets, also.[27] Role playing toys will also be produced, with a 24-inch "Finn Sword" being released first.[27]