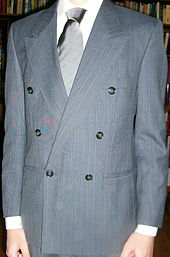 A grey striped six-on-one double-breasted suit with jetted pockets, a style popular in the 1980s

In clothing, the term double-breasted refers to a coat or jacket with wide, overlapping front flaps and two parallel columns of buttons or snaps; by contrast, a single-breasted coat has a narrow overlap and only one column of buttons. In most modern double-breasted coats, one column of buttons is decorative, while the other functional. The other buttons, placed on the outside edge of the coat breast, are either decorative (non-functional) or functional, allowing the overlap to fasten reversibly, right lapel over left lapel. To strengthen the fastening, a functional inner-button, called the jigger, is usually added to parallel-fasten the over-lapped layers together from the inside. [1]

Suit jackets and blazers typically have one to four rows of buttons (each row containing two buttons), one or two of the rows functional – the others are decorative. Each fastening method is identified using “number-on-number” terminology; the first number is the total number of front buttons, the second is the number of fastening buttons below the lapels (i.e. the second number also is the number of corresponding buttonholes). Six-on-two and six-on-one (as shown in the picture on the right) are the common button stances, but others exist. Stylistically, double-breasted suit jackets usually have peaked lapels, and fasten left lapel over right lapel as usual for men's jackets.

The original double-breasted jacket has six buttons, with three to close. This originated from the naval reefer jacket. Because shorter men may find that six buttons overwhelms their shorter torso, a four or six button configuration in which only the bottom one fastens may be a better option. The four-button double-breasted jacket that buttons at the lower button is often called the "Kent", after the man who made it popular - the Duke of Kent. [2]

Double-breasted suit jackets were popular from the mid-1930s until the late 1950s, and again from the mid-1980s to the mid-1990s. Today, double-breasted jackets are not as popular, and it is difficult to find them at many retail clothing stores; however, they continue to be produced for and advocated by the high-end menswear lines of Joseph Abboud and Ralph Lauren, as well as by bespoke tailors such as Thomas Mahon[3]; they have also seen a small comeback in European and American youth fashion, albeit in a slimmer, more modern cut. [4]