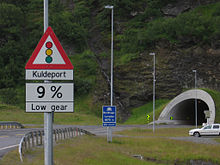 North Cape Tunnel (Norwegian: Nordkapptunnelen) is a subsea road tunnel under Magerøysundet from the Norwegian mainland to Magerøya. The tunnel was built between 1993 and 1999[1], is 6,875 metres (22,556 ft) long[2], and reaches a depth of 212 metres (696 ft)[2] below the sea level. Before the tunnel was built, a ferry carried the traffic across the sea between Kåfjord and Honningsvåg.

The tunnel takes its name from North Cape at the very north of Magerøya island. North Cape Tunnel is part of European route E69. The charge for passing through the tunnel in 2011 is 145 NOK for a car plus an additional 47 NOK per adult and 24 per child[1]. The fee is one-way and is charged also on the return trip. As of 2010, it is possible to cycle through the tunnel free of charge. The tunnel has anti-freezing gates (Norwegian: Kuldeport) which close the mouths of the tunnel in the winter to avoid freezing of leaking water. These gates open automatically when cars approach and are permanently open in the summer, when traffic is denser.