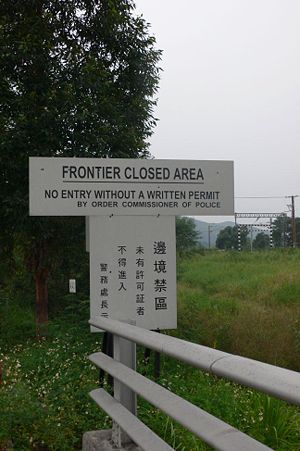 The Frontier Closed Area (FCA) (Chinese: 邊境禁區) is a 28 km² area in Hong Kong along the border with mainland China. It was gazetted and established in June 1951, and expanded to its current limit in 1962. Ordinary people who are not residents within the area cannot enter the area, except with a permit or when they are going to cross the border.

Along most of the border are wired fencing on both sides on the land and along the Shenzhen River.

It was set up to halt incoming of immigrants from mainland China, and to restrict illegal activities. It freezes development within the area. Due to the lack of human activities in the area, the FCA became a natural habitat for Hong Kong's animals and plants.

On September 7, 2006, the Government has announced its proposal to reduce the size of the area to 8 km². Only areas around border control points will be kept in the FCA.

The proposal was made possible by constructing a secondary boundary fence along the border patrol road, so that the security of the road can be maintained without designating large areas of FCA. The Planning Department will start a planning study on the areas removed from the FCA. The proposal will be implemented in 2010, after the new fence is completed. Members of the public will no longer need to obtain an FCA permit to enter the excluded areas.

Initially, most residents generally welcomed the plan. However, some environmentalists have pointed out that the proposal would affect ecology in the excluded area.[1][2]