Duel is a 1971 television film about a terrified motorist (played by Dennis Weaver) on a remote and lonely road being chased and stalked by the unseen driver of a tanker truck. It was written by Richard Matheson, based on his own short story, and directed by Steven Spielberg in his feature film directing debut.

David Mann (Dennis Weaver) is a middle-aged Los Angeles electronics salesman driving his Plymouth Valiant on a business trip. On a two-lane highway in the California desert, he encounters a grimy and rusty Peterbilt 281 tanker truck, traveling slower than the speed limit and expelling thick plumes of sooty diesel exhaust. Mann passes the unsightly truck, which promptly roars past him and then slows down. Mann passes the truck a second time and is startled when it suddenly issues a long air horn blast.

The truck follows him into a filling station. While there, Mann makes a phone call to his wife (Jacqueline Scott), who is upset with him for not confronting one of their friends at a recent party who was making a pass at her. The gas station attendant mentions that Mann needs a new radiator hose, but he disbelieves the attendant and refuses the repair. 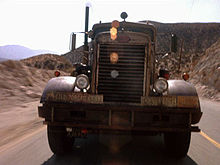 Once both Mann and the trucker are back on the road, the truck begins blocking Mann’s path each time he attempts to pass it. At one point, the truck driver waves at Mann, indicating that he can overtake. When he does, he almost strikes an oncoming vehicle. Mann realizes the truck driver was trying to trick him into a fatal collision. He passes the truck again, using an unpaved turnout next to the highway. The truck soon begins to tailgate Mann at high speeds—over 90 miles per hour (140 km/h)—forcing him to maintain his speed to avoid being rear-ended. The chase continues down a mountain road with the truck bumping him several times until the Plymouth goes off the road, colliding with a guardrail across the road from a diner. The truck keeps driving.

Mann enters the diner (Chuck's Café) to compose himself. After returning from the restroom, he is shocked to see the truck parked outside the diner. Mann studies the diner patrons carefully and begins an inner monologue in which he contemplates the driver's motives and second-guesses his decision to sit helplessly in the diner. Most of the patrons sitting at the counter give Mann the impression of malice, but when one leaves, appearing to approach the tanker, he instead drives away in a pickup truck. Mann eyes the patrons again to try to identify his pursuer, and when he thinks he has, he confronts him. The man he approaches (Eugene Dynarski) is angered at Mann's accusations and engages him in a short fist fight. After the fight is broken up by the café owner, the man abruptly leaves the diner in a livestock truck. However, the tanker truck is driven off a few short seconds later.

Mann leaves Chuck's Café and stops to help a stranded school bus, but his front bumper becomes caught underneath the rear of the bus. The truck appears at the end of a tunnel. Mann panics, manages to free the Plymouth and flees, but then is puzzled to see the truck helping the bus get moving. At a railroad crossing, the truck quietly approaches Mann's car from behind and starts pushing the Valiant towards a passing freight train. The train passes by just in time and Mann crosses the tracks and pulls off the road. The truck passes him by and disappears. 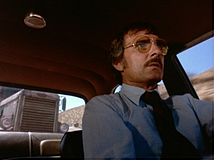 David Mann (Dennis Weaver) being chased by the truck.

Mann then stops at Sally's Snakerama Gas Station to call the police and refuel his Plymouth. Before he can complete the call, the truck roars up and plows into the telephone booth, with Mann jumping clear just in time. The truck proceeds to chase Mann as he is on foot, destroying Sally's Snakerama. Terrified, Mann jumps into his car and speeds away. Mann then hides behind an embankment off the road and sees the truck pass by, apparently without noticing him. After a long wait, Mann heads off again but is dumbfounded to see that the truck is waiting for him just around the bend. Mann stops his car and attempts to get help from an older couple in a car that is cruising by. They think he is crazy and refuse to listen until they see the truck themselves, and flee when the truck backs up towards them at increasing speed. Mann returns to his car. The truck eventually allows him to pass by and a high-speed chase begins. Mann races up steep grades, putting some distance between himself and the truck. However, his Valiant begins to overheat when its weak radiator hose fails and the truck quickly begins gaining on him. Mann barely makes the summit and coasts down the other side in neutral as the truck bears down on him.

Descending at speeds too great to control, the Plymouth spins out and impacts a rock wall. The truck speeds toward the damaged car as Mann accelerates, drives up a dirt road, and turns to face his opponent on a large hill overlooking a canyon. He places his briefcase on the accelerator and steers his vehicle directly toward the oncoming truck, jumping from the car at the last moment. The tanker hits the car, which bursts into flames, partially obscuring the truck driver's view. Too late, the truck's driver realizes he is headed for the canyon and brakes hard. With a blast of the air horn the truck plunges over the edge of a cliff into the canyon below. Surveying the smoking wreckage, Mann celebrates his victory and then sits down, exhausted. He tosses stones over the cliff as the sun sets.

The script is adapted by Richard Matheson from his own short story, originally published in Playboy magazine. It was inspired by a real-life experience, in which Matheson was tailgated by a trucker on his way home from a golfing match with friend Jerry Sohl, on the same day as the Kennedy assassination. The short story was given to Spielberg by his secretary, who reportedly read the magazine for the stories.[1]

Duel was Spielberg's feature-length directing debut, soon after a well-received turn directing a segment of the anthology television series Night Gallery. Initially shown on American television as an ABC Movie of the Week installment, it was eventually released to cinemas in Europe and Australia, and had a limited cinema release to some venues in the United States. The film's success enabled Spielberg to establish himself as a film director.[1]

Much of the movie was filmed in and around the communities of Canyon Country, Agua Dulce and Acton, California. In particular, sequences were filmed on Sierra Highway, Agua Dulce Canyon Road, Soledad Canyon Road and Angeles Forest Highway. Many of the landmarks from Duel still exist today, including the tunnel, the railroad crossing and Chuck’s Café, a place where David Mann abruptly stops for a break. The building, since 1980 housing a French restaurant called Le Chene, is currently still on Sierra Highway.[2]

The original made-for-television version was 74 minutes long and was completed in 13 days (three longer than the scheduled 10 days), leaving 10 days for editing prior to broadcast as the ABC "Movie of the Week". Following Duel's successful TV airing, Universal released Duel overseas in 1972, especially in Europe. Since the TV movie's 74 minutes was not long enough for theatrical release, Universal had Spielberg spend two days filming several new scenes. These new scenes turned Duel into a 90-minute film. The new scenes were the railroad crossing, school bus, and David Mann's telephone conversation with his wife. Also, a longer opening sequence was added with the car backing out of a garage and driving through the city. Expletives were added to make the film sound less like a television production.

Spielberg lobbied to have Dennis Weaver in the starring role because he admired Weaver's work in Orson Welles' Touch of Evil.

In the Archive of American Television website, Spielberg is quoted in an interview given by Weaver as proudly saying: "You know, I watch that movie at least twice a year to remember what I did".[3]

Though the car was carefully chosen — a red Plymouth Valiant — there were three cars actually used in the filming.[citation needed] The original release featured a 1970 model with a 318 V-8 engine[citation needed] and "Plymouth" spelled out in block letters across the hood, as well as trunk lid treatment characteristic of the 1970 model; a 1971 with a 225 Slant Six was also used.[citation needed] When the film was released in theatres and scenes were added, a 1972 model with a 225 Slant Six was added, with the "Plymouth" name on the hood as one emblem. All three cars were dressed with wheel covers available only to Valiant models, only in 1971.[citation needed]

The Valiant's red color was also intentional; Spielberg didn't care what kind of car was used in the film, but wanted it to be a red car to enable the vehicle to stand out in the wide shots of the desert highway.[1] 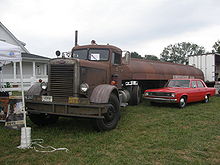 Spielberg had what he called an "audition" for the truck, where he viewed a series of trucks to choose the one for the film. He selected the older 1955 Peterbilt 281 over the then-current flat-nosed "forward control" style of trucks because the long hood of the Peterbilt, coupled to its split windshield and round headlights, gave it more of a "face", adding to the menacing personality.[1] In addition, Spielberg said that the multiple license plates on the front bumper of the Peterbilt subtly suggested that the truck driver is a serial killer, having "run down other drivers in other states."[1] For each shot, several people had the task to make it uglier, adding some "truck make-up". The shots of the truck are done in such a way as to make it seem "alive" in terms of its attack on Mann.

During the original filming, the crew only had one truck, so the final scene of the truck falling off the cliff had to be completed in one take. For the film's theatrical release, though, additional trucks were purchased in order to film the additional scenes that were not in the original made-for-television version (the school bus scene and the railroad crossing scene). Only one of those trucks has survived.[4][dubious – discuss]

Stock footage of both vehicles was later used in an episode of the television series The Incredible Hulk, titled "Never Give A Trucker An Even Break". Spielberg was not happy about this, but the usage was legal as the show was produced by Universal, and the Duel contract said nothing about reusing the footage in other Universal productions.[5]

The truck was purchased several times and is currently owned by a truck collector and is on display at Brad's Trucks in North Carolina.[6][dubious – discuss]

The film received many positive reviews. On Rotten Tomatoes the film currently has a "Fresh" score of 86% (2010).