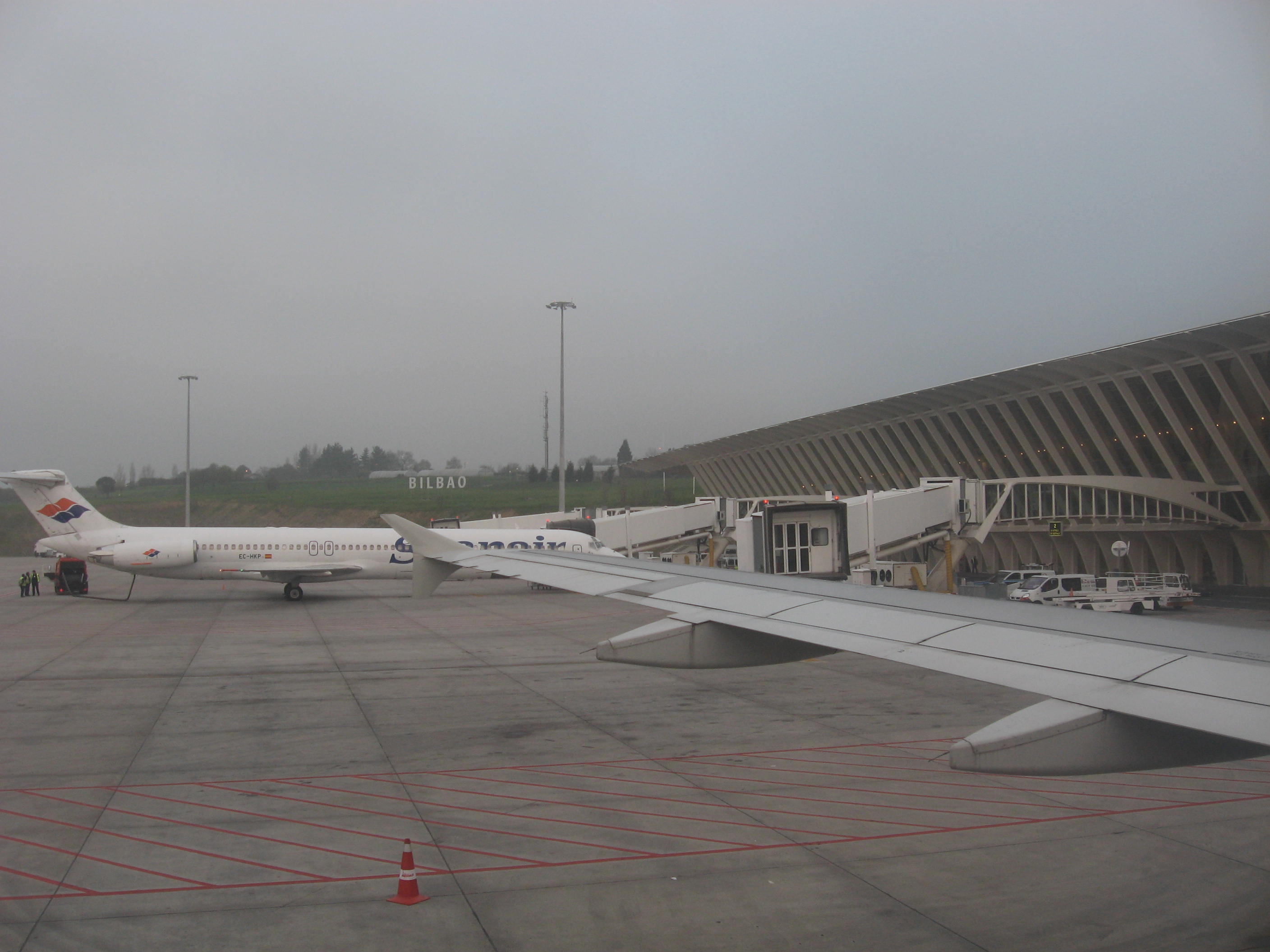 Bilbao Airport airport codes|BIO|LEBB is a public located 5 km north of , in the municipality of , in . It is the most important airport of the Basque Country and northern Spain, with 4,277,610 passengers on . It is famous for its new main terminal opened in and designed by .

After various different aeronautic experiments in the province of , in October 1927 steps were taken by the "Union of Public Works" to establish an airport in . A Provincial Board was created to study the possible location of the airport. It was not until 1936 that the "General Aeronautics Management" authorised the installation of an airport in . However, due to the many deficiencies of this site, the airport was not considered of interest.Bilbao is surrounded by mountains and a flat valley without significant population had to be found.

The construction works commenced during the Civil War but during this time and until June 1937 the airport was only used as a base for military activities. In 1938, the second stage of the airport's development began. The council resumed procedures with the government to modify the primitive project of 1936 and the drafting of a new project was authorised and later approved by the General Management of Infrastructure.

In 1940, it was decided by common agreement with the local organisations affected to build a civilian airport in Sondika. The construction works progressed slowly and on the 19th September 1948, the airport was at last opened to daytime traffic with the establishment of an air path to by Aviación y Comercio, SA. Two years later, the terminal, named after the well-known pilot from Bilbao, began to give service. At this time, the airport had an asphalt runway, the 11-29 (measuring 1,440 by 45 metres), another earth runway (measuring 1,500 by 150 metres), a taxiway, a passenger terminal, a tower control, a radio beacon, a direction finder as well as police, post office, weather, health, fuel and telephone services. In 1955, a taxiway was built to link the runway with the parking stands and terminal. An apron measuring 124 by 60 metres, a hangar for the "Royal Flying Club of Vizcaya" and permanent facilities for Campsa were also built.

Between 1964 and 1965, an instrumental ILS landing system and a meteorological radio for storm detection were installed; the runway was extended to 2,000 metres and the apron to 12,000 square metres. In 1975, the runway was surfaced and its orientation became 10-28 due to the change in magnetic declination. In 1977, the parking stand was extended, a link road was built and an system was installed. The runway 12-30, measuring 2,600 metres long, was opened the same year and the airport was classified as first category the following year.As a result of the population density of the area, approaching planes may have to fly over the extensive cemetery.

During the eighties, the ILS landing system entered into service for runway 10/30; the communication centre, passenger terminal and parking facilities were enlarged; and a fire service building and were constructed.

On February 19th an Iberia flight from Madrid crashed in the Mount , all passengers and crew died.

In 1996, a new taxiway with two rapid exits and a new aircraft parking apron were built.The works required the removal of tons of soil poisoned with residues.In May 1999, the new tower control was put into service, which allowed for a more centred vision of the airfield and at the same time facilitated airport operations. On the 19th November 2000, a new terminal area was opened in the north zone. This was comprised of a new terminal building, with a surface area of 32,000 square metres, a car park with 3,000 parking spaces measuring 95,000 square metres and a north apron for aircraft parking to serve the new terminal area.

The terminal has a sleek design, with two symmetrical "wings" and a sharp tip at its center which is specially visible when approaching the terminal from the sides. This original design has granted the building the of "La Paloma" ("The "). White concrete and glass have been used. The interiors are open and luminous spaces, distributed in two floors, the upper one for departures (check-in counters and gates) and the lower for arrivals.

There has been some criticism of 's design by , the Spanish airport authority, because it seems difficult to make further enlargements in the terminal's capacity because the design is too closed. In spite of this, modifications have taken place in 2005-2006 in the check-in area to provide enhanced shopping facilities for travellers, with almost double the retail space now being offered.

Basques using the airport widely complain about its lack of an arrivals area, since once passengers clear customs, they step directly outside. However, there is a dramatic viewing gallery raised above the baggage reclaim area, where those waiting to greet passengers can wait and watch as they collect their baggage and leave the terminal. There is often waving and excitement as relatives or friends scan to see each other from the gallery, and the architect cites this in defence of his design of the arrivals area.

Calatrava also designed the bridge in Bilbao.Like the terminal, it has been praised by its architectural looks and criticized for impracticality.

The airport has seen a constant increase in its traffic numbers, the old terminal was already saturated and obsolete in 1990, although it had been renewed only a few years earlier. At the present day Bilbao is the most important hub in northern Spain and the number of passengers using the new terminal continues to rise, especially after the increased tourist interest in the city since the opening of the Guggenheim museum. With the current increase of traffic, the terminal will become saturated again in a year because it is designed to handle about 4.5 million passengers per year, in 2007 it went nearly to its maximum capacity.