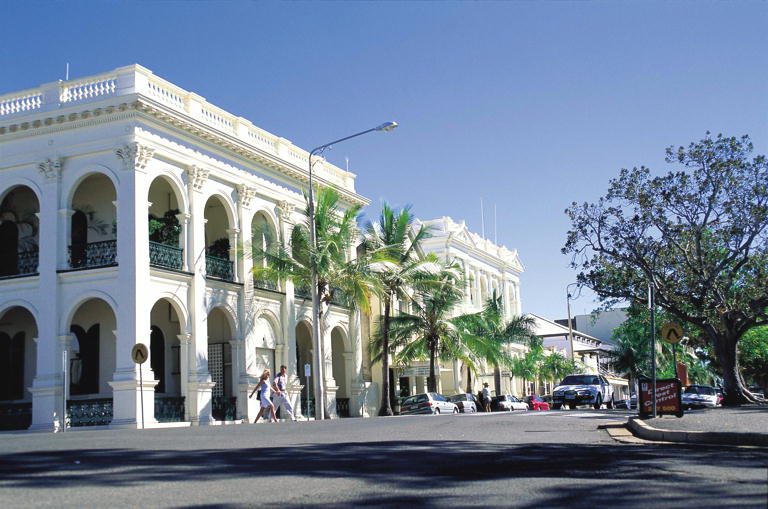 Rockhampton is a regional city and Local Government Area located in , . Rockhampton is the largest urban centre in with the 2006 census recording the Rockhampton Statistical Subdivision population to be 68,835 people. Rockhampton is seen as the unofficial capital Fact|date=May 2008 of as it hosts a significant number of governmental, community and major business administrative offices for the central part of the state.

Rockhampton enjoys over 300 days of sunshine each year, [ [http://www.rockhamptoninfo.com.au/about/lifestyle/ Rockhampton Lifestyle] "Rockhampton Regional Council" - Accessed ] which lends itself to tourism activities all year round and an abundance of outdoor activities. Popular attractions include Riverbank Parklands, a riverfront parkland attraction located on the banks of Fitzroy River; the , the coastal strip between and and , a large neighbouring island off the , the vast majority of which is national park.

The Rockhampton district is the traditional home of the Aboriginal people. [McDonald, L: "Rockhampton - A History of City & District", page 1. Rockhampton City Council, 1995]

The European history of the area began in 1853, when the area that would become Rockhampton was visited by the brothers Charles and William Archer, who were seeking grazing lands. They were acting on information from earlier expeditions by and , who had explored the area in 1844 and 1846 and noted suitable land for grazing then. [McDonald, L: "Rockhampton - A History of City & District", pages 17 & 18. Rockhampton City Council, 1995]

The Fitzroy River provided a convenient waterway for shipping of supplies for those who followed them, and a settlement grew on the riverbanks just downstream of a bar of rocks which prevented further upstream navigation from the coast. These rocks were incorporated with the traditional English term for a village, and the name "Rockhampton" was born around 1856, though was not proclaimed officially until .

In the 1880s and 1890s, sea ports were established on the coast, adjacent to the mouth of the Fitzroy River. Broadmount was on the northern side and Port Alma on the south. Railways were subsequently constructed to carry goods to the wharves at these locations, the railway to Broadmount opening on 1 January, 1898 and the line to Port Alma opened on 16 October, 1911. Maintenance on the Broadmount line ceased in August, 1929. The following month, the wharf caught fire and the line was effectively closed in July, 1930. The line to Port Alma closed on 15 October, 1986. ["The Port Railways of Rockhampton" Kerr, John Australian Railway Historical Society Bulletin, August, 2001 pp283-306]

Like many other Australian cities, Rockhampton's fortunes were assured with the discovery of , in this case at Canoona to the north. Fact|date=April 2008 Later, the significant gold deposit at Mount Morgan to the southwest was discovered, and Rockhampton became a service town for the local area. The early tents and shanties were slowly replaced by more substantial buildings. The historic streetscape of Quay Street still displays a number of substantial historic buildings, built when Rockhampton was envisaged as being capital of a state of North Queensland. Most prominent of these is the sandstone Customs House (1900), which today houses an information centre. Other important nineteenth century buildings include the Post Office (1892), the Supreme Court House (1888), and St Joseph's Cathedral (1892).

A passenger tramway began operating in the city on , making Rockhampton the only provincial in Queensland to have a street tramway. [ [http://steamtram.rockhampton.qld.gov.au/showarticle.aspx?id=12512 History of Purrey Steam Trams] "Rockhampton City Council" - Accessed ]

Purrey steam trams ran on a number of routes throughout South Rockhampton, totalling 10 kilometres of track. The discomfort of passengers riding in steam trams in a tropical climate in part led to their demise in 1939, replaced by a bus network run by the City Council. [Brimson, S: "The Tramways of Australia", page 169. "Dreamweaver Books", 1983]

During the , a US army base was established outside the city; it hosted up to 70,000 servicemen en route to action in the and . [ [http://www.catholicleader.com.au/index.php?search=1406 Catholic Leader online ] ]

Rockhampton is governed by the . The Council consists of a mayor and ten councillors. The Mayor is elected by the public, and the Councillors are elected from ten single-member divisions (or wards) using an optional preferential voting system. Elections are held every four years.

Rockhampton lies just north of the in Central Queensland. A sculpture originally marking the was later moved into town to be more accessible to tourists. Although the Tropic of Capricorn is represented on maps as a "dotted line" that lies at 23° 26' 22", there is actually a bio-geographical overlap of Tropical and Temperate zones more than 500km wide; Rockhampton is roughly at its centre on the East Coast of Australia.

The city is located on the banks of the Fitzroy River, approximately 40 kilometres from the river mouth. The Berserker Range lies on the eastern side of the city, with the Athelstane Range to the west.The coastal area to the east of the city is known as the , with the rapidly growing town of Yeppoon its major centre.

Rockhampton is made up of a number of suburbs or neighbourhoods, including:

Known as the "Beef Capital of Australia" [ [http://www.beefaustralia.com.au/documents/RockhamptonPromo.pdf Rockhampton also claims to be more than just the Beef Capital of Australia] "Beef Australia" - Accessed ] , few people realise just how much this city and its immediate surrounds have to offer. It is hard to go past the fact that beef is a big part of Rockhampton's economy and existence. There are reminders to be found on the Bruce Highway at the city's exit and entrance and within the city where there are statues of Santa Gertrudis, Brahman, Braford and Droughtmaster bulls.

Grazing is still a dominant industry in Central Queensland. Two large abattoirs are located in the Rockhampton area. Due to a long term drought and general economic conditions, one of these facilities has experienced a number of closures over the years and was closed from 2002 until 2004, but has now reopened. Fact|date=May 2008 The Gracemere Saleyards, one of the largest livestock sales facilities in the country, lies just to the west of the city.

has a large workforce in the city, which is the meeting point for the main north coast rail line and the line to the major coalfields to the west. Enormous coal trains regularly pass from the west to the coal port of Gladstone to the south. The coal fired 1440 megawatt Stanwell Power Station lies 30 kilometers west. [ [http://www.stanwell.com/frame.asp?ContentURL=/sites/locations.asp Stanwell Power Station] "Stanwell Corporation Ltd" - Accessed ]

The proximity of Rockhampton's airport, the base of operations for several major trucking companies and the largest port on the Australian East Coast Fact|date=March 2008 features heavily in infrastructure projects and planning for the city and Capricorn Coast Region.

Tourism is increasingly playing a role in the development of city and surrounds. The city is a convenient distance north from Brisbane to provide an overnight stop for tourists, who can then branch out to visit local attractions. The Capricorn Coast is a 30 minute drive from Rockhampton, with the islands of the Keppel group easily accessible from there.

To the north of the city lies the extensive , where large scale ground, air and amphibious operations can be conducted. A detachment office of the has been based in Rockhampton since 1995. [ [http://www.mindef.gov.sg/imindef/news_and_events/nr/2006/Nov/27nov06_nr.html MINDEF - News - Minister for Defence Mr Teo Chee Hean Visits Australia from 28 to 29 November 2006 (27 Nov 06) ] ]

The Rockhampton region has many renowned festivals, celebrating some of the various international cultures that call the region home. The annual Multicultural Festival and CQU Open Day held at the CQUniversity, showcases hundreds of market stalls and dislays, international foods, music and cultures are popular with the locals and tourists alike. [ [http://www.cqu.edu.au/openday/ Multicultural Festival and CQU Open Day] ]

The city also has a vibrant pub and night-club scene, many of them located in Denham Street. Local and national music groups can often be found performing live in these venues. The East and Denham Streets streetscape was renewed in 2002 and now caters for sidewalk dining at many new cafes located in the street.

The Pilbeam Theatre, seating 1200 people, and is host to many national and international music shows, as well as sporting and trade shows. Since its opening in 1978, the Theatre has been a centre of entertainment and performing arts, providing an environment to further develop the performing arts in Rockhampton and the region.

Rockhampton's climate may be classified as . The city is situated on the and lies within the southeast trade wind belt, too far south to experience regular north west influence, and too far north to gain much benefit from higher latitude cold fronts.

Typical daytime temperature ranges are 32 max 22 min in the summer /wet season and 23 max 9 min in the winter/dry season.

Rockhampton lies within the risk zone and the area is subject to summer thunderstorms. There is a high incidence of winter and early spring fogs. Maximum temperatures in the low to mid 40's have been recorded in October to March. Fact|date=August 2008