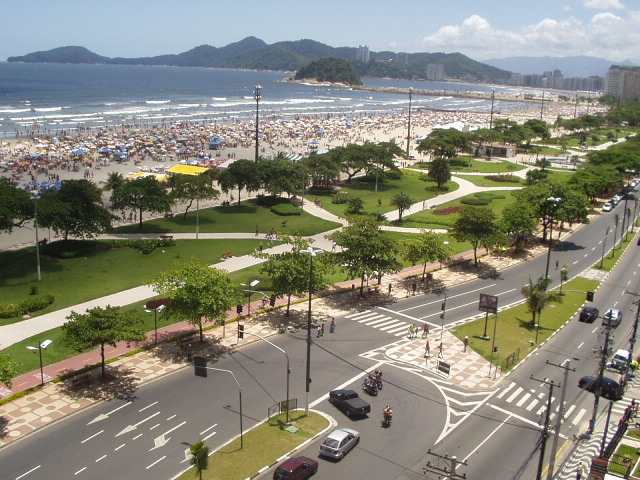 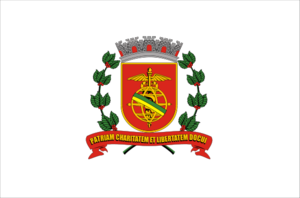 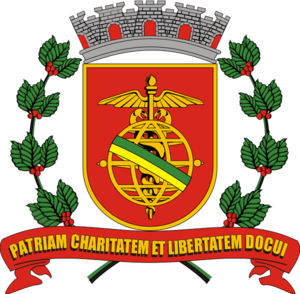 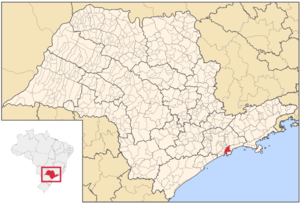 Santos (Audio|Br-Santos.ogg|pronunciation) is a in the São Paulo state of , founded in by the Portuguese nobleman . It is partially located on the island of São Vicente which harbors both the city of Santos and the city of São Vicente, and partially on the mainland. It is the main city in the metropolitan region of . , its population was estimated at 418,375 (1,476,820 metro area). Santos has the biggest seaport in Latin America, which traded over 72 million tons in 2006; is a significant centre; has large industrial complexes and shipping centres, which handle a large portion of the world's exports; as well as a number of other Brazilian exports including steel, oil, cars, oranges, bananas and cotton. The city also displays the Coffee Museum, where, once, coffee prices were negotiated; and a football memorial, dedicated to the city's greatest players, amongst which is .Its beach's garden, 5.335 km length, figures in the as the largest beach front garden.Santos is home for the famous football club , where has played.

Santos is about 79 km (49 mi) from the metropolis , capital of the state São Paulo.

It is divided into two distinct geographic areas: the islands and the continental area. Both areas differ both in terms of population, as in economic terms and geography.

It lies on the island of Saint Vincent, whose territory is divided with the neighboring municipality of San Vicente. With an area of 39.4 km ², densely urbanized, houses almost all the inhabitants of the city. It includes a flat area - Plain Litorânea extension of the State of São Paulo - which presents altitudes that rarely go beyond the twenty meters above sea level, and an area composed of isolated hills called Mass of St. Vincent, the former home and endowed an urban illegal occupation with a mix of fabrics characterized by high and low incomes, whose height does not exceed 200 meters above sea level.

About the flat region of the island of St. Vincent has almost no vegetation, because of the high process of sealing of urban land. In the region north of the island, in the neighborhoods of Alemoa, the Chico de Paula and Saboó there are still remnants of mangroves. Before the occupation of the area of the island by plane chácaras (and subsequently by urbanization), there were a vast flooded land covered by mangroves, the Atlantic forest and vegetation near the beach.

We can still find in the hills, vast copies of the Atlantic Forest native, despite existing chácaras and banana. The Lagoa da Saudade, located in Morro Nova Cintra, low altitude, is known to harbor a kind of alligator. The occupation disorderly represents both an environmental risk as geological: the deforestation leads to frequent landslides of land, mainly from January to March, the traditional season of rains in the region.

Most rivers in the island was channelled when the engineer Saturnino de Brito designed the system of channels in the city. As examples, we can cite the river Two Rivers and Ribeirao of Soldiers (current channel of av. Campos Salles). However, some major water courses have cut the island in the north, such as the St. George River, which suffers from problems of pollution and silting due to the occupation of its banks by slums.

History of the club

Santos FC was established on April 14th, 1912 through the initiative of 3 sports enthusiasts of the city (Raymundo Marques(photo), Mário Ferraz De Campos and Argemiro de Souza Júnior). They met in the headquarters of the Clube Concórdia to create a new soccer team. During the historic meeting many names were suggested for the new club: Concórdia, Euterpe ou Brasil Atlético. But they immediately got to an agreement when Edmundo Jorge Araújo came up with “Santos Foot-Ball Club”.

Their first game was on September 15th that same year. Santos beat Santos Athletic Club 3-0. However Guillermo Gomez Guarche, who is a researcher and a counselor at Santos FC, believes that their first game actually took place on June 23rd, 1912 against a local opponent named Thereza Team. The official club historian, Francisco Mendes Fernandes, claims that this game was just a training session with no official result. Either way Santos won their first game as the team defeated Thereza Team 2-1, with goals scored by Anacleto Ferramenta and Geraule Ribeiro. Santos formation then was Fauvel, Simon, Ari, Bandeira, Ambrósio, Oscar, Bulle, Geraule, Esteves, Fontes and Anacleto.

For the first official game on September 15th, the opponent was Santos Athletic Club, also known at the time as the ‘Clube dos Ingleses’. Santos first official goal in the history of the club was scored by Arnaldo Silveira.

In the beginning of 1913, Santos received an invitation from the São Paulo Football League to compete in the state championship. This was Santos’ first official competition and the debut happened on June 1st, against Germânia. The result was not a very good one, as the team was defeated 8 - 1. Santos formation at that match was Durval Damasceno, Sebastião Arantes, Sydnei Simonsen; Geraule Ribeiro, Ambrósio Silva, José Pereira da Silva; Adolfo Millon, Nilo Arruda, Anacleto Ferramenta, Harold Cross and Arnaldo Silveira.

Three weeks later, on June 22nd, Santos won their first match in an official competition against a team who would become the club greatest rival, Corinthians. Santos won 6-3 in a full Parque São Jorge, Corinthians’ home.

In 1913, the Campeonato Santista de Futebol took place for the first time, and the teams taking part of it were Santos, América, Escolástica Rosa and Atlético. The Alvinegro (the “black and white” as Santos is also called by fans) was crowned the champion, having six victories in six games, 35 goals for and only seven against. This was the very first achievement in the history of the club.

Since their very first years Santos was always very successful, as much in local games as in international ones. Santos won Paulista championship (state tournament) for the first time in 1935, after going through two unsuccessful years, due to the change of soccer to a professional sport.

In 1955, after 20 years without being champion, Santos defeated Taubaté and could finally get a title again. The formation of the team was: Manga, Hélvio, Feijó; Ramiro, Formiga, Urubatão; Tite, Negri, Álvaro, Del Vecchio and Pepe.

The following year, Valdemar de Brito would invite a 15 year old boy named Pelé to the club. Pelé would change the club forever taking Santos to a new phase in its history. He would help the club get achievements that would exalt Brazilian soccer worldwide. Santos’ team popularity during its golden age was enormous, even abroad. Santos traveled all over the world enchanting supporters with its magical style. The offensive players at that time were: Dorval, Mengávio, Coutinho, Pelé and Pepe. During this period, the golden years, Santos won twice the Intercontinental Cup (1962/1963), twice the Copa Libertadores da América (1962/1963), among other glories.

After Pelé Era, Santos Futebol Clube kept on its way to glories. In 1978 it again formed a winning team. The Meninos da Vila (literally, the boys from the vila, as they were nicknamed because the athletes were really young) won the Paulista Championship in 1978. Juari, Pita, Ailton were a stand out among others.After that the team got some more titles such as, Paulista Championship in 1984 and the Conmebol Cup in 1998.

When the club was going to turn 90 years old, in 2002, Santos conquered for the seventh time the most important national title, Campeonato Brasileiro (Brazilian Championship). The athletes forming the team were from Santos Youth Divisions. The Meninos da Vila were in the spotlight. All over Brazil Diego and Robinho became a symbol of a joyful and impressive way of playing. The following year the team was the runner-up in Copa Libertadores da América and also in the Brazilian Championship.

In 2004, Peixe (literally “Fish”- as it is nicknamed by its fans) won another significant competition. Overcoming the loss of key players such as Diego and Robinho during the Brazilian Championship, Santos was the champion of this tournament again, but this time under the coaching of Vanderlei Luxemburgo. The most important players for the team at that time were Robinho, Elano, Ricardinho and Léo.

The stakes were high for 2005. The team could manage to keep the most talented players and Vandelei Luxemburgo, who was still the coach at that time, was focusing his work on Copa Libertadores da América. However, the Spanish team Real Madrid made a very tempting offer to the coach who decided to leave to Europe.

August 2005; Santos FC was part of the greatest soccer negotiation in Brazil that far, in which Real Madrid bought Robinho. By the end of that year Vanderlei Luxemburgo returned to Santos FC after spending a season as the coach of the Spanish team.

During the first tournament played in 2006 the team already showed its competitiveness by winning the Paulista championship again after 22 years. By defeating Portuguesa de Desportos 2-0 at the Vila Belmiro Stadium, Santos’ team won a championship in its hometown, something that hadn’t taken place since 1965. In October, 2006 the club’s direction decided to buy Zé Roberto, the midfielder for the National Team during 2006 World Cup campaign.

Zé Roberto’s experience and skill were key ingredients for Santos FC to achieve Paulista Championship for the second time in a row. In a memorable match Santos FC defeated São Caetano becoming the state champion. Moraes, a young player who came from Santos Youth Divisions, scored the winning goal. The last time Alvinegro Praiano (Black and White from the beach, as it is also informally called by fans) had been the state champion for two-times in a row had been 39 years before that.

The colors of the club

A fact that is probably not known by most of Santos’ fans is that during the first months of existence the club was ‘tricolor’, which means that the official colors adopted by the club then were white, blue and gold.

However, the directors of the club faced huge difficulties to have the uniform made in those colors. This problem, alongside the questionable beauty of the color combination turned into a very debated topic.

Almost a year later, on March 13th, 1913, during the third meeting of the board of directors, Mr. Paulo Pelúcio, who was an associate at that time, suggested that the club should adopt black and white as its official colors. In defense of his idea he claimed that “white stands for peace and black stands for nobility”. His idea was embraced by all of those who were present. Mr. Raimundo Marques, president of Santos at that time, presented the suggestion for the club flag which should then be “white, diagonally transpassed by a black stripe with the club initials written in white on it”." =