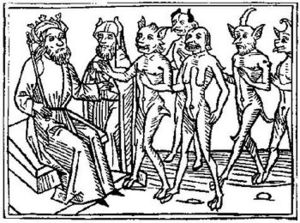 A woodcarving of Belial and some of his followers from Jacobus de Teramo's book Buche Belial (1473).

The etymology of the word is uncertain, but is most commonly translated as "lacking worth".[1] Some scholars translate it from Hebrew as "worthless" (Beli yo'il), while others translate it as "yokeless" (Beli ol), "may have no rising" (Belial) or "never to rise" (Beli ya'al). Only a few etymologists have assumed it to be an invented name from the start.[2] In the Book of Jubilees, penilely uncircumcised heathens are called "sons of Belial".

In the Goetia, Belial is said to be a mighty and a powerful king over fifty legions, made after Lucifer. He appears as two beautiful angels sitting in a chariot of fire. His purpose in the Goetia is to make the mage popularly known, possibly getting them titles. It is also written that sacrifice must be given or he will lie to the mage.

In the Torah the term appears in several places to indicate wicked or worthless people, such as :

But for corruption thou hast made Belial, an angel of hostility. All his dominions are in darkness, and his purpose is to bring about wickedness and guilt. All the spirits that are associated with him are but angels of destruction.

In the New Testament the word is used to refer to a demon, perhaps Satan[citation needed], when asked by St. Paul as to how Christ and Belial can agree. The passage in the Bible NIV states (2 Corinthians 6:15): "What harmony is there between Christ and Belial? What does a believer have in common with an unbeliever?".

Sebastien Michaelis states that Belial seduces by means of arrogance and his adversary is St. Francis of Paola; in this sense his name is translated as "Lord of Arrogance" or "Lord of Pride" (Baal ial).[citation needed]

In the Biblia Vulgata fewer allusions to this demon are made, referring to Belial as torrents of death, and to impious men as sons of Belial and men of Belial.

Belial is listed as the sixty-eighth spirit of The Lesser Key of Solomon.

The quality or state of being useless, base, good for naught. The Hebrew term beli·ya′‛al is applied to ideas, words, and counsel,[9] to calamitous circumstances,[10] and most frequently, to good-for-nothing men of the lowest sort—for example, men who would induce worship of other gods;[11] those of Benjamin who committed the sex crime at Gibeah;[12] the wicked sons of Eli;[13] insolent Nabal;[14] opposers of God’s anointed, David;[15] Rehoboam’s unsteady associates;[16] Jezebel's conspirators against Naboth;[17] and men in general who stir up contention.[18] Indicating that the enemy power would no longer interfere with the carrying out of true worship by his people in their land, Jehovah declared through his prophet: "No more will any good-for-nothing person pass again through you. In his entirety he will certainly be cut off."[19]

By the time Bible writing resumed in the first century, "Belial" was used as a name for Satan.[citation needed] So when Paul wrote[20] in his series of parallel contrasts, "What harmony is there between Christ and Belial?" the conclusion usually drawn is that "Belial" is Satan. The Syriac Peshitta here reads "Satan."[21]

The word "belial" appears frequently in Jewish apocrypha and pseudepigrapha.[1] In addition to his appearance in the Book of Jubilees, Belial appears in other texts as well.

Belial is also mentioned in the Fragments of a Zadokite Work (which is also known as The Damascus Document (CD)), which states that during the eschatological age, "Belial shall be let loose against Israel, as God spoke through Isaiah the prophet."[22] The Fragments also speak of "three nets of Belial" which are said to be fornication, wealth, and pollution of the sanctuary.[23] In this work, Belial is sometimes presented as an agent of divine punishment and sometimes as a rebel, as Mastema is. It was Belial who inspired the Egyptian sorcerers, Jochaneh and his brother, to oppose Moses and Aaron. The Fragments also say that anyone who is ruled by the spirits of Belial and speaks of rebellion should be condemned as a necromancer and wizard.

Testament of the Twelve Patriarchs

Belial is also mentioned in the Testaments of the Twelve Patriarchs. The author of the work seems to be a dualist because he presents Belial as God's opponent, not as a servant, but does not mention how or why this came to be. Simeon 5:3 says that fornication separates man from God and brings him near to Belial. Levi tells his children to choose between the Law of God and the works of Belial[24] It also states that when the soul is constantly disturbed, the Lord departs from it and Belial rules over it. Naphtali[25] contrasts the Law and will of God with the purposes of Belial. Also, in 20:2, Joseph prophesies that when Israel leaves Egypt, they will be with God in light while Belial will remain in darkness with the Egyptians. Finally, the Testament describes that when the Messiah comes, the angels will punish the spirits of deceit and Belial[26] and that the Messiah will bind Belial and give to his children the power to trample the evil spirits.[27]

In The Ascension of Isaiah, Belial is the angel of lawlessness and "the ruler of this world."

And Manasseh turned aside his heart to serve Beliar; for the angel of lawlessness, who is the ruler of this world, is Beliar, whose name is Matanbuchus.
—[28]

In the Rules of the Community God is found making a very prolific statement, "I shall not comfort the oppressed until their path is perfect. I shall not retain Belial within my heart."

The War Scroll and the Thanksgiving hymns both delve into the idea that Belial is accursed by God and his people, and shows how the existence of Belial in this world can be attributed to the mysteries of God since we can not know why he permits the dealings of Belial to persist.

Also in The Dead Sea Scrolls is a recounting of a dream of Amram, the father of Moses, who finds two 'watchers' contesting over him. One is Belial who is described as the King of Evil and Prince of Darkness.

The Satanic Bible names Belial as one of the Four Crown Princes of Hell (specifically, the North Crown), and states that his name means "'without a master'" and symbolizes true independence, self-sufficiency, and personal accomplishment."[29] Belial represents the earth element, is the Master of Mankind and the Champion of Humanity, and represents the carnal and base urges of humans.

BELIAL came last, then whom a Spirit more lewd
Fell not from Heaven, or more gross to love
Vice for it self: To him no Temple stood
Or Altar smoak'd; yet who more oft then hee
In Temples and at Altars, when the Priest
Turns Atheist, as did ELY'S Sons, who fill'd
With lust and violence the house of God.
In Courts and Palaces he also Reigns
And in luxurious Cities, where the noyse
Of riot ascends above thir loftiest Towrs,
And injury and outrage: And when Night
Darkens the Streets, then wander forth the Sons
Of BELIAL, flown with insolence and wine.
Witness the Streets of SODOM, and that night
In GIBEAH, when hospitable Dores
Yielded thir Matrons to prevent worse rape.

Or, my scorfulous French novel

On gray paper with blunt type !

Simply glance at it, you grovel

Hand and foot in BELIAL's gripe:

If I double down its pages

At the woeful sixteenth print,

When he gathers his greengages,

Ope a sieve and slip it in't?