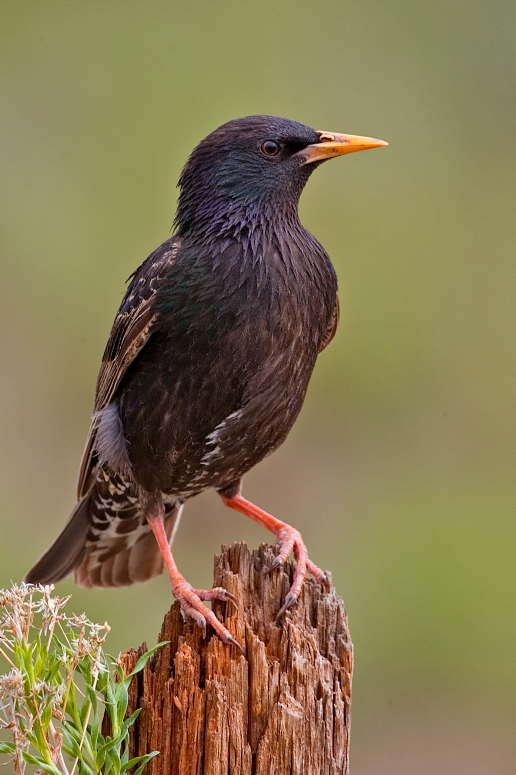 The European Starling, Common Starling or just Starling, "Sturnus vulgaris", is a in the family .

This species of is native to most of temperate and western . It is resident in southern and western Europe and southwestern Asia, while northeastern populations migrate south and west in winter to these regions, and also further south to areas where it does not breed in Iberia and north . It has also been introduced to , , , and .

It is among the most familiar of birds in temperate regions. It is 19–22 cm long, with a wingspan of 37–42 cm and a weight of 60–90 g. The is shiny black, glossed purple or green, and spangled with white, particularly strongly so in winter. Adult male European Starlings are less spotted below than adult females. The throat feathers are long and loose, and used as a signal in display. Juveniles are grey-brown, and by their first winter resemble adults though often retain some brown juvenile feathering especially on the head in the early part of the winter. The legs are stout, pinkish-red. The bill is narrow conical with a sharp tip; in summer, it is yellow in females, and yellow with a blue-grey base in males, while in winter, and in juveniles, it is black in both sexes. ing occurs once a year, in late summer after the breeding season is finished; the fresh feathers are prominently tipped white (breast feathers) or buff (wing and back feathers). The reduction in the spotting in the breeding season is achieved by the white feather tips largely wearing off. Starlings walk rather than hop. Their flight is quite strong and direct; they look triangular-winged and short-tailed in flight.

Confusion with other species is only likely in Iberia, the western Mediterranean and northwest Africa in winter, when it has to be distinguished from the closely related , which, as its name implies, has less spotting on its plumage. The Spotless Starling can also be diagnostically distinguished at close range by its longer throat feathers.

This is the of the "". More recently, it is increasingly being accepted that this is not a natural ary group but an assembling a number of more-or-less distantly related Eurasian starlings which look a bit alike. Uniting such different birds such as European, Vinous-breasted, and s in one genus has always been controversial, and it is likely the more distinct species will soon be separated again. Ultimately, the European and Spotless starlings, which form a , might be the only species retained in "Sturnus". [Zuccon, D., Cibois, A., Pasquet, E., & Ericson, P. G. P. (2006). Nuclear and mitochondrial sequence data reveal the major lineages of starlings, mynas and related taxa. "Molecular Phylogenetics and Evolution" 41 (2): 333-344. doi|10.1016/j.ympev.2006.05.007 (HTML abstract)]

There are several of the European Starling, mainly distinguishable by geographic range and the iridescence of adult plumage; much of the variation is clinal, with extensive between the subspecies. Acceptance of different subspecies varies between different authorities.

Several other forms have been named, but are generally no longer considered valid. Most are intergrades from where the ranges of various subspecies meet.

Widespread throughout the northern hemisphere, the European Starling is native to and is found throughout , northern (from to Egypt), northern , , the (including , , and ), and north-western . Furthermore, it has been introduced to and successfully established itself in , , , , and several islands. As a result, it has also been able to migrate to , , and .

It is a highly gregarious species in autumn and winter. Flock size is highly variable, with huge flocks providing a spectacular sight and sound usually occurring near roosts. These huge flocks often attract birds of prey such as Merlins or Sparrowhawks. Flocks are also noted for forming a tight -like formation in flight, frequently expanding and contracting and changing shape, all seemingly without any sort of leader. Very large roosts, exceptionally up to 1.5 million birds, can form in city centres, woodlands, or reedbeds, causing problems with their droppings. These may accumulate up to 30 cm deep, killing trees by their chemical concentration; in smaller amounts, the droppings are however beneficial as a , and therefore woodland managers may try to move roosts from one area of a wood to another to spread the benefit and avoid large toxic deposits.

Huge flocks of more than a million Starlings are observed just before sunset in spring in southwestern , . There they gather in March until northern n birds leave for their breeding ranges by mid-April. Their flocking creates complex shapes against the sky, a phenomenon known locally as "sorta sol" ("Black Sun"). To witness this spectacle, the best place are the seaward s ("marsken" in Danish) of and municipalities between Tønder and . [cite web |url= http://epod.usra.edu/archive/epodviewer.php3?oid=309856 |title= Black Sun in Denmark |work= Earth Science Picture of the Day |date= 2006-06-19 |accessdate= 2006-10-07]

Starlings are hunted by birds of prey, including the and . However, in the 1970s the consumption of chemically treated () crops by the starlings which were subsequently eaten by Peregrine Falcons caused a dangerous build-up of the toxin in the falcon. As a result, lower reproductive success was observed as a result of thinner eggshells and a build-up of residues in eggs.

European Starling nests are especially vulnerable to predators such as , , and humans. s are also a threat, as they often evict eggs, nestlings, and adult starlings from their nests.

The European Starling is , and typically consumes insects including , , and , as well as . While the consumption of is necessary for successful breeding, starlings are and can also eat , , , , and garbage, if the opportunity arises. [Thomas, H.F. 1957, The Starling in the Sunraysia District, Victoria. Part I. "Emu" 57, 31–48.]

Unpaired males begin to build nests in order to attract single females. Males often decorate the nest with ornaments (such as flowers) and fresh green material which the female later disassembles upon accepting him as a mate .

Starlings are both and , although broods are generally brought up by one male and one female, occasionally the pair may have an extra helper. Pairs may be part of a larger colony, in which case several other nests may occupy the same or nearby trees.

continue to be fed by their parents for 1-2 weeks. Pairs can raise up to three broods per breeding season, frequently reusing and relining the same nest.

Overall, the European Starling is listed by the as being a species of least concern. [IUCN2006|assessors=BirdLife International|year=2004|id=51909|title=Sturnus vulgaris|downloaded=6 May 2006 Database entry includes justification for why this species is of least concern] However, it has been adversely affected in northern Europe by intensive agriculture, and in several countries, it has been due to declines of more than 50%. In the , it declined by more than 80% between 1966 and 2004; although populations in some areas&mdash;such as &mdash;are stable or even increasing, those in other areas&mdash;mainly in &mdash;declined even more sharply. The overall decline has been attributed to a loss of food-rich permanent pasture, leading to the low survival rates of young birds.

Earlier, the European Starling had shown marked increases throughout Europe in the period 1800-1900. Before 1800, it had a disjunct range in the , absent from central and southern , with "S. vulgaris zetlandicus" in the far north and northwest (Shetland, Orkney, Caithness, Outer Hebrides), and "S. vulgaris vulgaris" south of the Scottish-English border; it was also rare or regionally absent in , western and western and northernmost England. Between 1800 and 1900, "S. vulgaris vulgaris" colonised north and westward from England to Ireland and all of Scotland except for Shetland (where "zetlandicus" remains present); since 1935, this subspecies has also spread to , where it now breeds in the southeast and southwest.

The Common Starling was originally introduced to Australia in order to decrease the population of crop pests—insects which the starlings were known to eat. Early settlers looked forward to the bird’s arrival believing that starlings were also important to the pollination of , an important crop. Nest-boxes for the newly released species were placed on farms and near crops.

The Common Starling threatens both Australian and . They commonly eat and damage fruit from orchards, such as , , , , and . In addition, starlings dig up newly sown grain and diminish already growing crops—an easy task for a flock of 500 – 150,000 birds.

Australia is home to numerous plants and animals—species that live nowhere else on earth. Yet, the Common Starling is an aggressive bird that displaces other hollow nesting, but endemic .

Finally, starlings pose a risk to the native and endemic . As they are capable of eating almost any kind of seed and flying great distances, Common Starlings are excellent weed dispersers. Seeds will often germinate more successfully following ingestion and Starlings are responsible for spreading invasive plant species such as the .

In New Zealand, the Starling was introduced in 1862, and now occurs in most of the country.

Although there are approximately 200 million starlings in , they are all descendants of approximately 60 birds (or 100 [http://www.birds.cornell.edu/AllAboutBirds/BirdGuide/European_Starling.html see here] ) released in 1890 in , , by who was a member of the Acclimation Society of North America, reputedly trying to introduce to North America every bird species mentioned in the works of . [cite web |url= http://www.birds.cornell.edu/AllAboutBirds/BirdGuide/European_Starling.html |title= Cornell Laboratory of Ornithology species account for European Starling]

As an , European Starlings are not protected under the . [cite web |url=http://www.fws.gov/migratorybirds/intrnltr/mbta/taxolst.html |title=U. S. Fish & Wildlife Service: Birds protected by the Migratory Bird Treaty Act |accessdate=2007-12-17]

In South Africa, the Starling was introduced in 1890, and is now common in the southern Cape region, and less common north to the area. [SASOL Bird e-guide: [http://www.birdlife.org.za/fieldguide/book/species_info.php?id=10 Common Starling] ]

*In Welsh Mythology tamed a starling and sent it across the Irish Sea with a message to her brother , who sailed from Wales to Ireland to rescue her with his brother, .
*The starling's ability to mimic human speech earned the bird this cameo in 's "": :"The king forbade my tongue to speak of Mortimer. But I will find him when he is asleep, and in his ear I'll holler 'Mortimer!' Nay I'll have a starling shall be taught to speak nothing but Mortimer, and give it to him to keep his anger still in motion."
* poem "The Stare's Nest by My Window" is about a starlings nest. "Stare" is a local, informal variation of "starling."
*On their 1999 album ", the '90's indie rock band Pavement released the song "Starlings of the Slipstream". [http://www.last.fm/music/Pavement/_/Starlings+of+the+Slipstream] The band was from California (specifically, the northern-most part of the region), where European Starlings are ubiquitous [http://www.extension.org/pages/Starlings] .
*One of the main characters of the novel and film is named Clarice Starling. At one point, another character makes a pun based on her name and tells her to "Fly away, little Starling... Fly, fly, fly..."