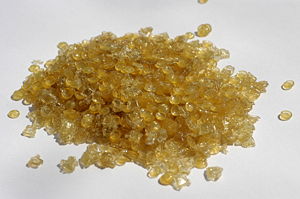 An animal glue is an adhesive that is created by prolonged boiling of animal connective tissue.

These protein colloid glues are formed through hydrolysis of the collagen from skins, bones, tendons, and other tissues, similar to gelatin. The word "collagen" itself derives from Greek κόλλα kolla, glue. These proteins form a molecular bond with the glued object.

Stereotypically, the animal in question is a horse, and horses that are put down are often said to have been "sent to the glue factory." In fact, other animals are used, including rabbits and fish.[1]

Around 5,000 years ago, the Egyptians used hide glue as an adhesive.[2] Evidence exists that the Sumerians also used glue before the Egyptians.[citation needed]

Animal glue was the most common woodworking glue for thousands of years until the advent of synthetic glues such as polyvinyl acetate (PVA) and other resin glues in the 20th century. Today it is used primarily in specialty applications such as lutherie, pipe organ building, piano repairs, and antique restoration. Glass artists take advantage of hide glue's ability to bond with glass, applying hide glue to glass. As the glue hardens it shrinks, chipping the glass.

It has several advantages and disadvantages compared to other glues. The glue is applied hot, typically with a brush or spatula. Glue is kept hot in a glue pot, which may be an electric unit built for the purpose, a double boiler, or simply a saucepan or crock pot to provide a warm water bath for the container of glue.

Most animal glues are soluble in water, useful for joints which may at some time need to be separated.[3] Alcohol is sometimes applied to such joints to dehydrate the glue, making it more brittle and easier to crack apart.

Hide glue is used in woodworking. It may be supplied as granules, flakes, or flat sheets, which have an indefinite shelf life if kept dry. It is dissolved in water, heated and applied warm, typically around 60°C (140°F). Warmer temperatures quickly destroy the strength of hide glue.[4] Commercial glue pots, simple water baths or double boilers may be used to keep the glue hot while in use. As hide glue cools, it gels quickly. At room temperature, prepared hide glue has the consistency of stiff gelatin, which is in fact a similar composition. Gelled hide glue does not have significant strength, so it is vital to apply the glue, fit the pieces, and hold them steady before the glue temperature drops much below 50°C (120°F). All glues have an open time, the amount of time the glue remains liquid and workable. Joining parts after the open time is expired results in a weak bond. Hide glue's open time is usually a minute or less. In practice, this often means having to heat the pieces to be glued, and gluing in a very warm room,[5] though these steps can be dispensed with if the glue and clamp operation can be carried out quickly.

Where hide glue is in occasional use, excess glue may be held in a freezer, to prevent spoilage from the growth of microorganisms. Joints to be glued with hide glue must fit perfectly, as it has poor gap-filling properties.

Hide glue that is liquid at room temperature is also possible through the addition of urea. An example of this type of mixture is Old Brown Glue [6], created by W. Patrick Edwards, the director of the American School of French Marquetry. In stress tests performed by Mark Schofield of Fine Woodworking Magazine, liquid hide glue compared favourably to hot hide glue[7] in average strength of bond. "However, any liquid hide glue over six months old can be suspect because the urea eventually hydrolyzes the protein structure of the glue and weakens it— even though the product was 'protected' with various bactericides and fungicides during manufacture."[4]

Animal hides are soaked in water to produce "stock." The stock is then treated with lime to break down the hides. The hides are then rinsed to remove the lime, any residue being neutralised with a weak acid solution. The hides are heated, in water, to a carefully controlled temperature around 70 degrees Celsius. The 'glue liquor' is then drawn off, more water added, and the process repeated at increasing temperatures.

The glue liquor is then dried and chipped into pellets.[8]

The significant disadvantages of hide glue - its thermal limitations, short open time, poor gap filling capability and vulnerability to micro-organisms - are offset by several advantages. Hide glue joints are reversible and repairable. Recently glued joints will release easily with the application of heat and steam. Hide glue sticks to itself, so the repairer can apply new hide glue to the joint and reclamp it. In contrast, PVA glues do not adhere to themselves once they are cured, so a successful repair requires removal of the old glue first - which usually requires removing some of the material being glued.

Hide glue creates a somewhat brittle joint, so a strong shock will often cause a very clean break along the joint. In contrast, a joint glued with PVA will usually break the surrounding material, creating an irregular, difficult to repair break. This brittleness is taken advantage of by instrument makers. For example, instruments in the violin family require periodic disassembly for repairs and maintenance. The top of a violin is easily removed by prying a palette knife between the top and ribs, and running it all around the joint. The brittleness allows the top to be removed, often without significant damage to the wood. Regluing the top only requires applying new hot hide glue to the joint. If the violin top were glued on with PVA glue, removing the top would require heat and steam to disassemble the joint (causing damage to the varnish), then wood would have to be removed from the joint to ensure no cured PVA glue was remaining before regluing the top.

Hide glue also functions as its own clamp. Once the glue begins to gel, it pulls the joint together. Violin makers may glue the center seams of top and back plates together using a rubbed joint rather than using clamps. This technique involves coating half of the joint with hot hide glue, and then rubbing the other half against the joint until the hide glue starts to gel, at which point the glue becomes tacky. At this point the plate is set aside without clamps, and the hide glue pulls the joint together as it hardens.

Hide glue regains its working properties after cooling if it is reheated. This property can be used when the glue's open time does not allow the joint to be glued normally. For example, a cello maker may not be able to glue and clamp a top to the instrument's ribs in the short one minute open time available. Instead, the builder will lay a bead of glue along the ribs, and allow it to cool. The top is then clamped to the ribs. Moving a few inches at a time, the maker inserts a heated palette knife into the joint, heating the glue. When the glue is liquefied, the palette knife is removed, and the glue cools, creating a bond. A similar process can be used to glue veneers to a substrate. The veneer and/or the substrate is coated with hot hide glue. Once the glue is cold, the veneer is positioned on the substrate. A hot object such as a clothes iron is applied to the veneer, liquefying the underlying glue. When the iron is removed, the glue cools, bonding the veneer to the substrate.

Hide glue joints do not creep under loads. PVA glues create plastic joints, which will creep over time if heavy loads are applied to them.

Hide glue is supplied in many different gram strengths, each suited to specific applications. Instrument and cabinet builders will use a range from 120-200 gram strength. Some hide glues are sold without the gram strength specified. Experienced users avoid this glue as the glue may be too weak or strong for the expected application.

Rabbit-skin glue is more flexible when dry than typical hide glues. It is used in the sizing or priming of oil painters' canvases. It also is used in bookbinding and as the adhesive component of some recipes for gesso and compo.