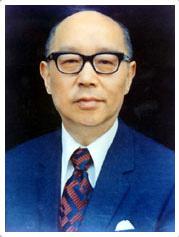 Yen Chia-kan (zh-tspw|t=嚴家淦|s=严家淦|p=Yán Jiāgàn|w=Yen Chia-kan; : Giâm Ka-kàm), or Yen Chia-jin (, ndash , ), better known as C. K. Yen, succeeded as President of the upon Chiang's death on , . He served out the remainder of Chiang's term until , .

C. K. Yen was born in , Province. He graduated from St. John's University in with a degree in .

Yen previously served as Minister of Economic Affairs, minister of finance, and Governor of . He became premier on , . In 1966 the National Assembly elected Yen as Vice President and re-elected him in 1972. He assumed the role of President following the death of Chiang Kai-shek and was later succeeded by Chiang's son, Premier . After his presidency, Yen served as Chairman of the Council on Chinese Cultural Renaissance and Chairman of Board of the until 1991.