Chronic wasting disease (CWD) is a transmissible spongiform encephalopathy (TSE) of mule deer, whitetailed deer, elk (wapiti), and moose. TSEs are caused by unusual infectious agents known as prions. To date, CWD has been found mainly in cervids (members of the deer family). First recognized as a clinical "wasting" syndrome in 1967 in mule deer in a wildlife research facility in northern Colorado, USA, it was identified as a TSE in 1978 and has spread to a dozen states and two Canadian provinces.[1] CWD is typified by chronic weight loss leading to death. There is no known relationship between CWD and any other TSE of animals or people.

Although there have been reports in the popular press of humans being affected by CWD, a study by the CDC suggests that "[m]ore epidemiologic and laboratory studies are needed to monitor the possibility of such transmissions."[2] The epidemiological study further concludes that, "[a]s a precaution, hunters should avoid eating deer and elk tissues known to harbor the CWD agent (e.g., brain, spinal cord, eyes, spleen, tonsils, lymph nodes) from areas where CWD has been identified."[2]

Most cases of CWD occur in adult animals. The disease is progressive and always fatal. The most obvious and consistent clinical sign of CWD is weight loss over time. Behavioral changes also occur in the majority of cases, including decreased interactions with other animals, listlessness, lowering of the head, blank facial expression, repetitive walking in set patterns, and a smell like meat starting to rot. In elk, behavioral changes may also include hyperexcitability and nervousness. Affected animals continue to eat grain but may show decreased interest in hay. Excessive salivation and grinding of the teeth also are observed. Most deer show increased drinking and urination.

The agent responsible for CWD (and other TSEs, such as scrapie and bovine spongiform encephalopathy) is commonly thought to be a prion, an abnormal form of a normal protein, known as prion protein (PrP), most commonly found in the central nervous system (CNS), and is capable of spreading to the peripheral nervous system (PNS), thus infecting meat, or muscle, of deer and elk. The abnormal prion protein infects the host animal by promoting conversion of normal cellular prion protein (PrPC) to the abnormal prion form (PrPCWD). The build-up of PrPCWD in the brain is associated with widespread neurodegeneration. An alternative theory gaining some thus far limited acceptance is that the Spiroplasma bacteria, a bacterium devoid of a conventional cell wall, may be the causative agent. This does not eliminate prions from playing some role, but speculation has suggested that prions may even be a by-product of Spiroplama. [3]

Research is being conducted to develop live-animal diagnostic tests for CWD. Currently, definitive diagnosis is based on postmortem examination (necropsy) and testing. Gross lesions seen at necropsy reflect the clinical signs of CWD, primarily emaciation. Aspiration pneumonia, which may be the actual cause of death, also is a common finding in animals affected with CWD. On microscopic examination, lesions of CWD in the central nervous system resemble those of other TSEs. In addition, scientists use a technique called immunohistochemistry to test brain tissue for the presence of the abnormal prion protein to diagnose CWD.

In 2010, A team from New York described detection of PrPSc even when initially present at only one part in a hundred thousand million (10−11) in brain tissue. The method combines amplification with a novel technology called Surround Optical Fiber Immunoassay (SOFIA) and some specific antibodies against PrPSc. After amplifying and then concentrating any PrPSc, the samples are labelled with a fluorescent dye using an antibody for specificity and then finally loaded into a micro-capillary tube. This tube is placed in a specially constructed apparatus so that it is totally surrounded by optical fibres to capture all light emitted once the dye is excited using a laser. The technique allowed detection of PrPSc after many fewer cycles of conversion than others have achieved, substantially reducing the possibility of artefacts, as well as speeding up the assay. The researchers also tested their method on blood samples from apparently healthy sheep that went on to develop scrapie. The animals’ brains were analysed once any symptoms became apparent. The researchers could therefore compare results from brain tissue and blood taken once the animals exhibited symptoms of the diseases, with blood obtained earlier in the animals’ lives, and from uninfected animals. The results showed very clearly that PrPSc could be detected in the blood of animals long before the symptoms appeared. After further development and testing, this method could be of great value in surveillance as a blood or urine-based screening test for CWD.[4][5]

The origin and mode of transmission of the prions causing CWD is unknown, but recent research indicates that prions can be excreted by deer and elk, and is transmitted by eating grass growing in contaminated soil.[6][7] Animals born in captivity and those born in the wild have been affected with the disease. Based on epidemiology, transmission of CWD is thought to be lateral (from animal to animal). Maternal transmission may occur, although it appears to be relatively unimportant in maintaining epidemics. Research has recently shown that an infected deer's saliva is able to spread the CWD prions.[8]

In the mid-1980s, CWD was detected in free-ranging deer and elk in contiguous portions of northeastern Colorado and southeastern Wyoming. Soon after diagnosis of the disease as a TSE, Colorado and Wyoming wildlife management agencies stopped the movement of deer and elk from their research facilities; wild cervids have not been translocated from the endemic area. In May 2001, CWD was also found in free-ranging deer in the southwestern corner of Nebraska (adjacent to Colorado and Wyoming) and later in additional areas in western Nebraska. The limited area of northern Colorado, southern Wyoming, and western Nebraska in which free-ranging deer, moose, and/or elk positive for CWD have been found is referred to as the endemic area. The area in 2006 has expanded to six states including parts of eastern Utah, southwestern South Dakota, and northeastern Kansas. There are also non-contiguous (to the endemic area) areas in central Utah and central Nebraska. The limits of the affected areas are not well defined since the disease is at a low incidence and the amount of sampling may not be adequate to detect it. In 2002, CWD was detected in wild deer in south-central Wisconsin and northern Illinois and in an isolated area of southern New Mexico. In 2005, it was found in wild White-tailed deer in New York and in Hampshire County, West Virginia.[9] In 2008, the first confirmed case of CWD in Michigan was discovered in an infected deer on an enclosed deer breeding facility. It is also found in the Canadian provinces of Alberta and Saskatchewan. 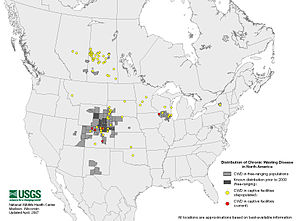 In February 2011, the Maryland Department of Natural Resources reported the first confirmed case of the disease in that state. The affected animal was a white-tailed deer killed by a hunter.[10]

CWD has also been diagnosed in farmed elk and deer herds in a number of states and in two Canadian provinces. The first positive farmed elk herd in the United States was detected in 1997 in South Dakota. Since then, additional positive elk herds and farmed White-tailed deer herds have been found in South Dakota (7), Nebraska (4), Colorado (10), Oklahoma (1), Kansas (1), Minnesota (3), Montana (1), Wisconsin (6) and New York (2). As of fall of 2006, four positive elk herds in Colorado and a positive White-tailed deer herd in Wisconsin remain under State quarantine. All of the other herds have been depopulated or have been slaughtered and tested, and the quarantine has been lifted from one herd that underwent rigorous surveillance with no further evidence of disease. CWD also has been found in farmed elk in the Canadian provinces of Saskatchewan and Alberta. A retrospective study also showed that Mule deer exported from Denver to the Toronto Zoo in the 1980s were affected.

Species that have been affected with CWD include elk, mule deer, white-tailed deer, black-tailed deer, and moose. Other ruminant species, including wild ruminants and domestic cattle, sheep, and goats, have been housed in wildlife facilities in direct or indirect contact with CWD-affected deer and elk with no evidence of disease transmission. There is ongoing research to further explore the possibility of transmission of CWD to other species.

In recent years, the terms food safety and risk have attracted more attention. This attention arose due to many reports and news coverage about food illness events around the world. Food safety concerns, especially regarding meat, have particularly increased in European countries and North America after specific food safety events. Additionally, Chen and Wohlgenant (2006) found that meat consumption responds to health information to a greater degree in current years and that it affects the demand of meat products strongly when price and other factors are left aside (Chen & Wohlgenant, 2006). The research also found that consumers` preferences are not impacted by factors such as price and incomes as much due to the forming of personal habits, but consumers would decrease consumption of particular food products when they perceived food safety problems (Chen & Wohlgenant, 2006). Further, meat safety issues in one region of the world can impact other regions where the safety event did not take place.

Awareness of CWD, a disease that affects cervid (deer, elk, moose) populations, may produce similar effects on the risk assessment and consumption of venison. If this can be determined, there will be several implications for the market of game meat and for policy concerning management of CWD, and possibly other similar diseases. If consumers’ food preferences are shown to be effected by their risk assessment of CWD, this will mean that in areas that have a higher prevalence of CWD, the market demand for game meat and recreational hunting would likely be reduced.

To collect data on risk attitudes and perceptions an internet-based survey was given to a market research firm. The survey contained questions on risk attitudes and preferences in general, as well as more specific questions on Chronic Wasting Disease and venison. The respondents that answered questions in the survey indicating that they were concerned about CWD showed higher levels of risk perception than those who did not. This is consistent with logic, as those who are concerned about the disease likely do so because they see it as a risk to the health and safety of both people and the animals themselves.