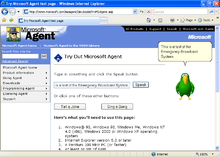 Microsoft provides examples on its website for the use of Agent.

Microsoft Agent is a technology developed by Microsoft which employs animated characters, text-to-speech engines, and speech recognition software to enhance interaction with computer users. Thus it is an example of an embodied agent. It comes preinstalled as part of Microsoft Windows 2000 through Windows Vista (it is not part of Windows 7). Microsoft Agent functionality is exposed as an ActiveX control that can be used by web pages.

The theory behind this software came from work on social interfaces by Clifford Nass and Byron Reeves at Stanford's Center for the Study of Language and Information.[1]

Interactive character technology was first introduced in Microsoft Bob, which used an early version of Agent technology internally referred to as "Microsoft Actor." It was the code used in initial version of the Office Assistant in Office 97. Microsoft Agent was subsequently created by Tandy Trower in an attempt to offer technology that was more flexible and available to third-party developers to include in their applications and web pages. The software release also included four interactive characters as well as a utility that enables developers to assemble their own characters and interactions.

Microsoft Agent replaced the original Microsoft Bob code in Office 2000, although this use did not include Agent's much-touted speech synthesis or recognition capabilities or any of the four Microsoft Agent characters. Instead the Office team created their own characters include one dubbed "Clippit" or "Clippy". However, Bob Actors or Office 97 assistants are incompatible with Office 2000 and later versions, and vice-versa. The current version of Microsoft Agent was quietly released on MSDN in 1998. Microsoft recently announced that "Microsoft has decided to discontinue development of Microsoft Agent technologies. Beginning with Windows 7, Microsoft Agent will not be included or supported in future versions of the Microsoft Windows operating system. We encourage Microsoft Agent application developers and redistributors to evaluate their activities in light of this decision." Microsoft is no longer offering licenses and no longer distributes the SDK.

The speech engine itself is driven by the Microsoft Speech API (SAPI), version 4 and above. Microsoft SAPI provides a control panel for easily installing and switching between various available Text to Speech and Speech to Text engines, as well as voice training and scoring systems to improve the quality and accuracy of both engines.

Microsoft provides four agent characters for free, which can be downloaded from the Microsoft Agent website. These are called Peedy, Merlin, Genie, and Robby. Some characters also shipped with Microsoft Office up to version 2003 as the Office Assistants and with Windows XP as search assistants. New Agent characters can also be created using Microsoft's development tools, including the Agent Character Editor. Agents can be embedded in software with Visual Basic for Applications and in web pages with VBScript, and automated tools for the purpose of simplifying this exist. However, web page agents are only compatible with Internet Explorer, since alternative browsers like Opera or Mozilla Firefox do not support ActiveX. Additionally, users of Windows Me, Windows 2000, Windows XP, and above or owners of Microsoft Office 2000 and up are the only ones who have Agent software pre-loaded on their computers; others have to download the software and install it manually.

In Windows Vista, Microsoft Agent uses Speech API (SAPI) version 5.3 as its primary text-to-speech provider. (In previous versions of Windows, Agent uses SAPI version 4, which is not supported in Windows Vista and later.) Beginning with Vista, multilingual features of Microsoft Agent under a particular language version of the OS are not supported; that is, Agent will function in other languages only under a localized Windows version of the same language.

Microsoft announced in April 2009 that Microsoft Agent support will be discontinued after Windows 7.[2]