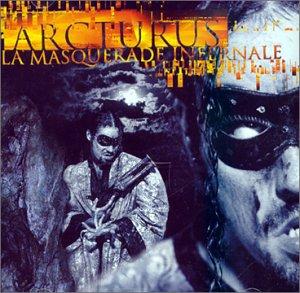 
"La Masquerade Infernale" (the title meaning "the infernal masquerade" in French) is a 1997 by Arcturus. Released by , the album is a huge step away from the slow, doom-influenced of . It has a dark, eerie, almost carnival sound to it, featuring heavy use of s and samples, often making those elements more prominent than the guitar. Most of the songs revolve around the themes of , , and . The characteristic screams of black metal are replaced by a gruff, low-toned clean vocal style, occasionally alternated with operatic singing or the bizarre high-pitched singing of guest singer , who nine years later would replace Garm as the band's frontman. "LMI" is regarded by many as Arcturus' and one of the greatest examples of avant-garde metal. It was reissued in 2003 by , remastered and without the hidden track before track 1.