Danby is a village and civil parish in the Scarborough district of North Yorkshire, England. According to the 2001 UK census, Danby parish had a population of 1,515.[1] Karl Pearson spent a lot of time there.[citation needed]

Danby is served by a rail network between Middlesbrough and Whitby and an Arriva bus service. Danby village incorporates the Duke of Wellington pub, and the neighbouring Post Office. The village lies on the Esk Valley Walk.

A little over a mile to the south-east are the remains of Danby Castle, now incorporated into farm buildings.[2] 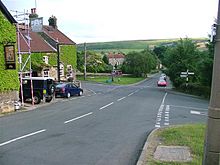 Danby, the Duke of Wellington pub on the left under repair

The popular Danby Agricultural show is held every year in August, with traditional country entertainments and activities such as show jumping, Sheepdog trials, exhibitions of farm animals and machinery as well as horticultural, craft and produce competitions.

Daniel Duck (1743-?1825) was the vicar of Danby from 1780 until he was succeeded by his son Joseph in 1825. Joseph came from Sidney Sussex College, Cambridge and his family was one of yeoman freeholders in the Yorkshire Dales. He is commemorated in the poem, Lines in Memory of the Rev. D. Duck, Curate of Danby.

The preface to this poem in the original manuscript had: ”Written on the Back of a pew before divine service while the folk were gathering up. Sunday April 1835.” Daniel Duck's diaries are held by the Whitby Literary and Philosophical Society who indicate that Daniel was the eldest son of Joseph Duck of Ainthorpe, yeoman, and Hannah.He was perpetual curate of Danby, first appearing in the church register in Feb 1780.'