The franc (Arabic: فرنك‎) was the currency of French Morocco from 1921. It became the currency of all Morocco in 1957 and circulated until 1974. It was divided into 100 centimes (Arabic: سنتيم).

Before the first World War, the Moroccan rial was worth 5 French francs. However, after the war, the franc's value fell, such that when the franc replaced the rial, it was at a rate of 10 francs = 1 rial. The Moroccan franc was equal in value to the French franc. When Spanish Morocco was united with the rest of Morocco, the franc replaced the Spanish peseta at a rate of 1 peseta = 10 francs.

In 1960, the dirham was introduced. It was subdivided into 100 francs. The franc was replaced as the subdivision of the dirham by the santim in 1974.

Rarities during this time include KM#51a, the AH1371 50 francs coin in gold (it was normally minted in Aluminum-Bronze.) Another major rarity is KM#A54, an AH1370 100 francs coin minted in silver. Krause says that 10 million of these coins were minted, but nearly all were melted. Today, only 100[citation needed] are known. 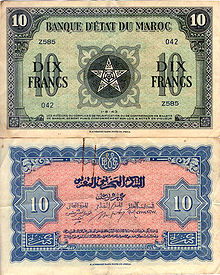