Principle of a CODLAG propulsion system

Combined diesel-electric and gas (CODLAG) is a modification of the combined diesel and gas propulsion system for ships.

A CODLAG system employs electric motors which are connected to the propeller shafts (usually 2). The motors are powered by diesel generators. For higher speeds, a gas turbine powers the shafts via a cross-connecting gearbox; for cruise speed, the drive train of the turbine is disengaged with clutches.

This arrangement combines the diesel engines used for propulsion and for electric power generation, greatly reducing service cost, since it reduces the number of different diesel engines and electric motors, requiring considerably less maintenance. Also electric motors work efficiently over a wide range of revolutions and can be connected directly to the propeller shaft so that simpler gearboxes can be used to combine the mechanical output of turbine and diesel-electric systems.

Another advantage of the diesel-electric transmission is that without the need of a mechanical connection, the diesel generators can be decoupled acoustically from the hull of the ship, making it less noisy. This has been used extensively by military submarines but surface naval vessels like anti-submarine vessels will benefit as well. Usually CODLAG ships are equipped with rechargeable batteries like diesel-electric submarines as well, allowing them to maneuver in silence without any heavy machinery running. 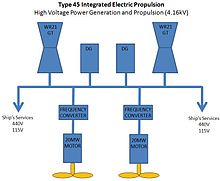 A system which uses both diesel engines and gas turbines to generate electricity for electric motors, where there is no mechanical transmission from either to the propellers, is not classified as CODLAG, but as integrated electric propulsion (IEP) or integrated full electric propulsion (IFEP). Such an arrangement is in use on passenger ships like RMS Queen Mary 2, with a pool of diesel generators for the base load and turbo generators for peak power, and on warships such as the Royal Navy's Type 45 destroyer and the upcoming Zumwalt-class destroyer (DDG-1000/DD(X)).