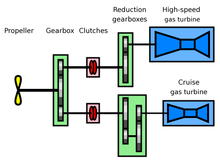 Principle of a COGOG propulsion system

Combined gas or gas (COGOG) is a propulsion system for ships using gas turbine engines. A high efficiency, low output turbine is used for cruising speeds with a high output turbine being used for high-speed operations. A clutch allows either turbine to be selected, but there is no gearbox to allow operation of both turbines at once. This has the advantage of not requiring heavy, expensive and potentially unreliable gearboxes.

The system is currently used in the 3 ships of the Russian Navy's Slava class cruisers, and in the Royal Navy Type 42 destroyers.

HMS Exmouth (F84) of the Royal Navy was converted to COGOG propulsion as a test bed for its use in later British ships.