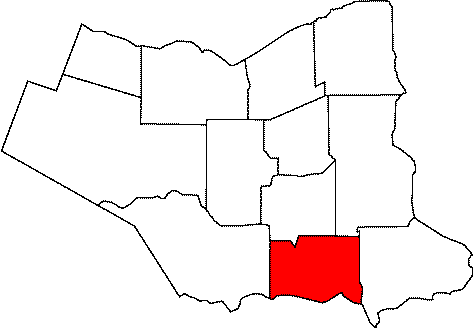 mapsize =
map_caption = Location of Port Colborne in the Niagara Region of .

In pre-colonial times, the Neutral Indians lived in the area, due in part to the ready availability of and from outcroppings on the Onondaga Escarpment. This advantage was diminished by the introduction of firearms by European traders, and they were gradually driven out by the Five (later Six) Nations (Iroquois) who were allied with the British against the and their French allies. [ [http://www.newadvent.org/cathen/07565a.htm Catholic Ecyclopedia, "The Hurons"] ]

The city grew up around the southern terminus of the , which was extended to reach Lake Erie in 1833. Originally called Gravelly Bay, after the large, shallow, and bedrock-floored bay upon which it sits. Port Colborne was incorporated as a village in 1870, became a town in 1917, and was re-incorporated as a city in 1966, merging with neighbouring soon after. [http://www.keithoverend.com/Intro/heritage/History/history.HTM]

From supplying the original camps for the labourers who worked on the canal, martime commerce has been an important part of Port Colborne's economy to the present day. Port Colborne was a heavily industrial city throughout most of the 20th century, hosting a , two modern flour mills, an , a cement plant operated by , and a operated by in addition to the ongoing ship repair and provisioning trade. In the past thirty years, some of these industries have closed, while those operations which remain now employ significantly fewer residents due to modernization and cutbacks.

Port Colborne has been successful in attracting new industry, significantly agro-business operations of Casco Inc. [ [http://www.casco.ca/ CASCO Inc.] ] and which process corn into products such as sweeteners and citric acid. However, the economy has gradually shifted towards tourism and recreation, taking advantage of the scenic beauty of the lake shore.

Port Colborne hosts the annual festival in recognition of the important role played by the Welland Canal in the history of the city. Originating as a small fair held at the , it has grown to feature live music, an antique car show, fireworks, tall ships, a kite festival, and food from around the globe. The festival also highlights the presence of Lock 8, which at 1,380 ft (420 m), is one of the world's longest s.Fact|date=August 2008 The lock is intended as a guard to keep the water level on the constant independent of weather on the lake. Hence the ships are only raised or lowered one to four feet depending on the current water level in Lake Erie. Much of the festival centres around West St., which runs along the side of the canal, and has an excellent view of the Clarence St. Bridge, one of very few remaining on the canal.

The , located near the centre of town, is a resource for local history and archival research. In addition to a collection of historic buildings and artifacts, it opened up the "Marie Semley Research Wing" to foster research into local history, named to commemorate the long-standing efforts of a local resident who devoted hours to the museum.

Kinnear House is a local heritage property associated with the jurist , the first woman in Canada to be appointed judge by the federal government, or to appear as counsel before the Supreme Court.

enthusiasts can choose from 3 golf courses open from April until late fall. , , and Coyote Golf Club.

A curiosity in town is the "incredible shrinking mill" which is an optical illusion produced when viewing the federal grain elevator. When travelling east on Lakeshore road, the mill appears to move farther away as one drives closer. [ [http://city.portcolborne.on.ca/visitinghere/attractions/the_incredible_shrinking_mill/ City Of Port Colborne - Visiting Here - The Incredible Shrinking Mill ] ]

The International Nickel Company (now Vale Inco) has long been one of the city's main employers, since the opening of a refinery in 1918. Taking advantage of inexpensive from generating stations at nearby , the refinery produced electro-refined nickel for the war effort, and grew to employ over 2,000 workers by the 1950s. Cutbacks in operations and increasing factory automation have reduced the workforce to its present day total of 190. [ [http://www.inco.com/newscentre/mediakit/operations/default.aspx Vale Inco - Media Kit ] ]

Emissions from Inco's base metal refinery, closed in 1984, resulted in soils contaminated with concentrations of nickel, copper and cobalt above the Ontario Ministry of the Environment's "soil remediation criteria." [http://www.ene.gov.on.ca/envision/land/portcolborne/index.htm] However, two studies, one in 1997 and another in 1999 found " [no] adverse health effects which may have resulted from environmental exposures." [http://www.ene.gov.on.ca/envision/land/portcolborne/index.htm] After a series of public meetings between the City, the Ministry of the Environment (MOE) and Inco, it was decided to perform a Community-Based Risk Assessment, a process designed to determine whether the contamination poses a threat to the current, past, or future residents of Port Colborne, and what Inco must do to clean up the contaminated areas. [http://city.portcolborne.on.ca/cityhall/committees/details.cfm?recordid=61] As of 2008, this process is only now concluding, although a few properties deemed to be at high risk have already been remediated.Fact|date=August 2008

* member and former Toronto Maple Leaf player, Ted 'Teeder' Kennedy.
* star , who plays on the series.
* Former CEO of , Chancellor of , and Officer of the , Lynton 'Red' Wilson
* , singer/songwriter of folk band
* , the first women to be appointed judge by the federal government