Carcassonne is a tile-based German-style board game for two to five players, designed by Klaus-Jürgen Wrede and published in 2000 by Hans im Glück in German and Rio Grande Games in English.[1] It received the Spiel des Jahres and the Deutscher Spiele Preis awards in 2001. It is named after the medieval fortified town of Carcassonne in southern France, famed for its city walls. The game has spawned many expansions and spin-offs, and several PC and console versions. The game's wooden follower pieces, colloquially called "meeples,"[2] have become a symbol of European board gaming.[3]

The game board is a medieval landscape built by the players as the game progresses. The game starts with a single terrain tile face up and 71 others shuffled face down for the players to draw from. On each turn a player draws a new terrain tile and places it adjacent to tiles that are already face up. The new tile must be placed in a way that extends features on the tiles it abuts: roads must connect to roads, fields to fields, and cities to cities.

A part of a game board after several turns.

After placing each new tile, the placing player may opt to station a follower piece on a feature of that newly-placed tile. The placing player may not use a follower to claim any features of the tile that extend or connect features already claimed by another player. However, it is possible for terrain features claimed by opposing players to become "shared" by the subsequent placement of tiles connecting them. For example, two field tiles which each have a follower can become connected into a single field by another terrain tile.

The game ends when the last tile has been placed. At that time, all features (including fields) score points for the players with the most followers on them. The player with the most points wins the game.

During the players' turns, cities, cloisters, and roads (but not fields) are scored when they are completed—cities and roads when they are completed (i.e. contain no unfinished edges from which they may be expanded), and cloisters when surrounded by eight tiles. At the end of the game, when there are no tiles remaining, all incomplete features are scored. Points are awarded to the players with the most followers in a feature. If there is a tie for the most followers in any given feature, all of the tied players are awarded the full number of points. In general (see table), points are awarded for the number of tiles covered by a feature; cloisters score for neighboring tiles; and fields score based on the number of abutting completed cities.

Once a feature is scored, all of the followers in that feature are returned to their owners. 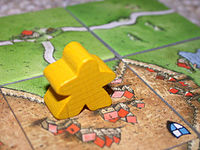 In the first and second editions of the game, completed cities covering just two tiles scored two points (one per tile) and one extra point for every pennant that resides in the city. This exception is removed from the third edition, in which there is no difference between two-tile cities and cities of larger size.

The greatest divergence in scoring rules between the editions of Carcassonne is in scoring for fields. In the first edition, the players with the greatest number of followers adjacent to a city were awarded four points for that city. Thus, followers from different fields contributed to the scoring for a city, and followers on a field may contribute to the scoring for multiple cities. The second edition considered different fields separately — for each field, the players with the greatest number of followers in a field scored three points for each city adjacent to the field, although points were only be scored once for any given city. The third edition removes these exceptions and brings field scoring in line with the scoring of other features.

Carcassonne is considered to be an excellent "gateway game" by many board game players[4] as it is a game that can be used to introduce new players to board games. The rules are simple, no one is ever eliminated, and the play is fast. A typical game, without any expansions, takes about 45 minutes to play. There is a substantial luck component to the game; however, good tactics greatly improve one's chances of winning. Examples of tactical considerations include:

Representation of original box tiles, plus The River mini expansion

The 2000 base box contains the following items:

Several official expansions for Carcassonne have been published, which add numerous additional rules, tiles and new kinds of figures. Together, they can more than double the length of the game. These expansions are generally compatible with each other and may be played together.

"Carcassonne: Wheel of Fortune" ("Carcassonne – Das Schicksalsrad", July 2009)
A full replacement for the base game and/or expansion, featuring:

Carcassonne — The River (Carcassonne — Der Fluss, 2001)
Originally distributed for free with the Carcassonne base game. Only available separately beginning 2009. The 2007 Xbox Live Arcade version includes a toggle option for the expansion.

The Count of Carcassonne (Der Graf von Carcassonne, 2004)
Via new tiles, provides an incentive to complete other players' features: when a player does so, she may place a follower in the city of Carcassonne, and then later move that follower in to a feature as it completed (commonly known as "paratrooping").

Carcassonne — The River II (Der Fluss II, November 2005)
Similar to the original River expansion, The River II tiles include features from previous expansions, for example a volcano to invoke the dragon.

Carcassonne — The Festival (2011)
Included as a bonus with the 10th anniversary edition of the base game.

Carcassonne Big Box 2 (2008, 2009)
This Big Box is the same size as the previous Big Box, but with a slightly different component mix.

Carcassonne 10 year anniversary edition (2011)
A stand alone release of the original game to celebrate the 10th anniversary with special packaging, "crystal" meeples made from see through acrylic and a special mini expansion, the festival.

In addition, some retailers offer bundles of expansions without unique branding.

Comparison of the starting tile and tile backs for the basic game (center) with two spin-offs: The Ark of the Covenant (left) and Carcassonne: Hunters and Gatherers (right).

Following the success of Carcassonne, a number of games have been spun off from the main game, all sharing similar mechanics. There is also a travel-sized version of the original game, Travel Carcassonne (Reise-Carcassonne), released in 2007.

Carcassonne: Hunters and Gatherers (Carcassonne: Die Jäger und Sammler, 2002)
Hunters and Gatherers is a stand-alone game that involves the building of forests, rivers and wildlife rather than cities and roads. This game attempted to rectify some perceived faults in the original by eliminating cloisters, introducing a "special tile" system to encourage players to complete cities (now forests) owned by other players, and making the value of meadows vary both up and down with animals that appear on the tiles.
The Ark of the Covenant (2003)
Ark is a biblical-themed version of Carcassonne by Inspiration Games based on the Old Testament, which includes the animal feature found in Hunters and Gatherers, as well as the Ark itself which may be moved in lieu of follower placement, scoring points for followers that they pass through.
Carcassonne: The Castle (Carcassonne: Die Burg, 2003)
The Castle is a two-player spin-off, designed by Reiner Knizia, where the game is played within the confines of a fixed castle. Players gain extra abilities by scoring an exact number of points, and tile placement rules are relaxed.
Carcassonne: The City (Carcassonne: Die Stadt, 2004)
The City is a "deluxe-style" stand-alone game similar to The Castle, where tile placement is relaxed. The significant new rules involve the addition of city walls when the city grows beyond a certain size.
Carcassonne: The Discovery (Carcassonne: Neues Land, 2005)
An exploration-themed stand-alone game that involves mountains, seas and meadows. The significant change in this game is that followers are no longer automatically removed when a terrain feature is completed: they must be removed as a game action, in lieu of placing a new follower that turn. Players may choose to remove a follower from, and score for, a terrain feature before it is completed, albeit for fewer points; followers remaining on the map at the end of the game also suffer a score penalty even if the features they are standing on are completed.
New World: A Carcassonne Game (Carcassonne: Mayflower, 2008)
New World is a stand-alone game that allows players to play Carcassonne in the New World, aka America. Players begin the basic tile-laying from a coastal edge and move westward, creating towns, hunting, farming, and trail blazing as they go along. Although terminology has changed, this game follows the basic rules of Carcassonne very closely but is more restricted than the basic game.
The Kids of Carcassonne (Die Kinder von Carcassonne, 2009)
Unveiled at the Nuremberg International Toy Fair in February 2009[5] this is a short game for younger children inspired by Carcassonne, designed by Marco Teubner.[6][7]
Cardcassonne (2009)
This is a card game based on Carcassonne.[8]

Carcassonne for iOS
An iPhone and iPad application developed by TheCodingMonkeys.[9]
Carcassonne on mobile- and smartphones
Developed by exozet games. Release: July/August 2011.[10]
Carcassonne: The Computer Game
A PC-based version of Carcassonne that included AI, online, and hotseat modes.[11] It was distributed only in Germany[11] by games company Koch Media[12] and discontinued in 2006.[13]
Carcassonne on BrettspielWelt (BSW)
Includes the expansions: The River, Inns & Cathedrals, Traders & Builders, Princess & Dragon, and King & Scout, as well as options to score based on different rulesets used across various editions of the game.
Carcassonne for Xbox 360
In 2006, Microsoft announced in a press release that Carcassonne would be an Xbox Live Arcade title[14] alongside Catan and Alhambra. The title was published by Sierra Online and released on June 27, 2007;[15] it includes all the tiles of the original game and those of "The River" expansion. This version of the game uses the 3rd Edition scoring rules by default; the game allows alternate and/or older rules for non-ranked and single player games. Sierra has promised to release the expansions as well. As of October 30, 2009, The River II expansion and King & Baron (King & Scout) expansions are available. On November 15, 2007, Microsoft made Carcassonne available free of charge for seven days to celebrate the fifth anniversary of their Xbox Live service.[16]

Carcassonne for Nintendo DS
Video game news website Kotaku announced on July 9, 2009 that an iteration of the game will be released on Nintendo DS in 2009. According to Kotaku, the game will include the "River" expansion as well as three new "worlds" described as "Asian, Nordic and Arabic."[17]

International Carcassonne tournaments were held in Germany in 2003-2005.[19]

The first official Carcassonne world championship was held at SPIEL in Essen, Germany, in 2006,[20] and every year after that. The fifth was held on October 24, 2010 during SPIEL but in an alternate location in Herne, Germany. Ralph Querfurth has been the World Champion for four out of five years.[21]