Infobox Film | name = The Fast and the Furious 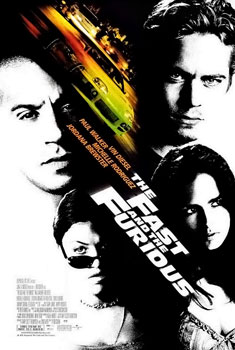 A group of s are hijacking and taking their contents. One car first goes in front of the truck and uses a hook to pull off the pane of glass. One of the people then uses a to enter the cab, subdue the driver, and drive off with the contents. The truckers are about to arm themselves and take things into their own hands, but hold off and let the try to handle it. Brian O'Connor (Paul Walker) is an who is trying to find out who is responsible for these truck hijackings.

He tries to get in with a group of people led by Dominic Toretto (Vin Diesel). Toretto runs a and does s on cars. Vince (Matt Schulze) gets into a fight with Brian which Dominic breaks up and tells Brian not to come back. Brian shows up again at a car race and bets his car that he will win. Dominic easily beats him in the race. The police then come to break up the race. Everyone flees, but Brian stays around and picks Dominic up. They are accousted by a rival Vietnamese car shop. They blow up Brian's car. Afterwards, Toretto says that Brian still owes him a ten-second car, or a car that can complete the 1/4 mile in ten seconds or less.

Soon, Brian gets inside the Toretto clan. He dates Dominic's sister, Mia, and begins tuning up cars and find out more information. The skid marks of the Honda Civics show a brand of tires. When Brian goes into the shop late at night to check out the cars, the tires don't correspond to the tires on the Civics. Vince, one of Dominic's friends, finds Brian poking around and accuses him of being a cop. Brian denies it and says that he can't lose another race and was checking everyone's cars out. Dominic, Vince, and Brian then break into the Vietnamese car shop, where they find a stack of DVD players and cars without engines in them.

Brian reports his findings to his superiors. After another truck hijacking, the police move in and arrest all the members of the Vietnamese car shop, but find that the players were legally purchased and that they are not the ones doing the hijackings. Brian's superior tells him that it has to be Toretto doing it. Brian casually asks Toretto where he got the money to buy all the equipment and says that whatever Toretto is doing, he wants to be in on it. Toretto agrees as long as Brian wins the upcoming Race Wars, which take place in the desert.

In one race, Toretto clan member Jesse races Johnny Tran and loses. He then drives away very fast. At night, Toretto and the rest of the clan drive out. Brian tells Mia that he's an undercover cop and tells her that the truckers are now armed. He convinces her to come with him to save Toretto.

They trace his to Highway 86. Toretto pulls out the Civics to make one last carjacking. As dawn breaks, they find the truck and attempt to hijack it. However, the truck driver is armed with a . Vince's arm is trapped in the hook as Letty and Toretto swing wildly to try to rescue him. Letty's car soon flips over and Dominic soon skids off the road. Brian catches up to the truck and gets Vince off as the truck driver is reloading his gun. He calls a helicopter in, revealing to Toretto that he is a cop. Toretto drives off angrily.

Brian confronts Toretto at his house. At that moment, Jesse comes back. A couple of Vietnamese car shop people on motorcycles do a and seriously injure Jesse. Brian and Dominic drive out in their cars to go after them. Dominic forces one cycle to flip over. Brian successfully shoots the other motorcycle. They then find themselves at an intersection and engage in a street race. A train approaches. Both cars manage to speed up and pass the tracks as the train barrels down on them. As they look at each other, however, Dominic sideswipes a truck and his car flips over. In the last scene Brian gives his keys to Dominic, saying, "I still owe you a ten-second car."

"The Fast and the Furious" was met with mixed reviews, and received particularly harsh criticism for what some felt was its derivative storyline, which shared many similarities with the 1991 film "".

The movie became the stereotypical template blamed for flooding the streets with s, largely because of the flashy, decorative appearance of the cars in the film and the exaggeration of the effects of nitrous oxide.

Early on, the script drew criticism from die-hard tuner enthusiasts for its technical inaccuracies and for its use of the word "NOS" ( Oxide System, a registered trademark of ) to refer generically to several forms of injection: in the film, both Holley's NOS and Nitrous Express' NX systems are displayed prominently. This gaffe was corrected in the sequel, "", wherein nitrous oxide injection systems were referred to as, simply, "."

The movie spawned video games, three sequels, and a top selling DVD. At the time of its release, it was one of the best selling DVDs of all time. The movie was filmed under the working-title "Redline" and it was not until months after wrapping was the title officially set.

In Japan where the movie is known as "Wild Speed", a self titled arcade video game was released by in 2006. [ [http://www.taito.co.jp/gm/raw_thrills/ff/ "The Fast and The Furious" arcade video game official website] ] A trailer for the movie was included in the 2001 game "Tokyo Extreme Racer Zero" which is part of the influential long running itself inspired by the "" 1980s movies.

The film has spawned 3 sequels: "", "", and "Fast and Furious". returned for the first sequel, teaming up with , but sat out for the second. starred in the second sequel. The third sequel, which will be released in 2009, will feature , , , and reprising their roles from the first film.