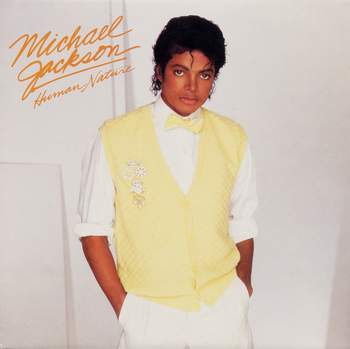 "Human Nature" is a single released by , and is the fifth of seven singles released from his 1982 hit album "Thriller". It was written by Toto member , with the lyrics provided by . The song reached number seven on the "Billboard" Hot 100, but was not as big an international hit as his previous songs, as the single was not released outside the US.

The following is taken from the special edition of Thriller, where Quincy Jones talks in the album's extra tracks.

"Human Nature" would not have been included on "Thriller" if it weren't for forgetfulness. While producing "Thriller" in 1982, both Jackson and had planned to include the song "Carousel" (now an outtake) on the album, as there was room for just one more "mood-like" song, as Jones puts it. However, Jones believed that "Carousel" had to be taken out and replaced. During this time, Toto sent Jones two demo tapes that they thought would be suitable for Michael.

The first two songs on the demo tape did not impress Jones. After the first two samples, Jones forgot to turn the tape off. It was at this moment, as Jones describes it on the special edition of "Thriller", that "...and all of a sudden there was all this silence, and then it went "why? why?...da da da da da da da da...why? why?". While talking about it, Jones mentions that he gets "goosebumps from just talking about it".

It was upon listening to this demo, written by , that Jones decided to replace "Carousel" with "Human Nature", partly due to its "wonderful flavour". Jones then contacted to write a lyric to the song.

"Human Nature" is one of Jackson's songs that does not have a clear-cut meaning, and even today people have differing interpretations.

While talking about "Thriller" in his 1988 autobiography "Moonwalk", Jackson mentions that "Human Nature" is "music with wings". It is also mentioned that people asked him frequently about the real meaning of the lyrics. Jackson replied with "People often think the lyrics have some special personal significance...which often isn't true...it's important to reach people, to move them...sometimes one can do this with the mosaic of the music melody arrangement and lyrics...sometimes it is the intellectual context of the lyrics".

Additionally, both Jackson and "Q" (how Jackson refers to in the book) believed that "Human Nature" had the "prettiest melody that they had heard by far".

"Human Nature" was part of the set list for Jackson's world tours, being performed live during his in 1984 with his brothers, his Bad Tour from 1987-1989, and his Dangerous Tour from 1992-1993. The song was not used during his HIStory Tour (it was replaced with ""), but did a one-off performance in at the Royal Brunei concert in 1996.

What makes the live performance even more unusual, is that each performance is different from the others. Certain 'gaps' in the song create the opportunity for Michael to become more freestyle in his movement technqiues, and is easily comparable when looking at a performance from the Bad Tour and the later Dangerous Tour. The song has inspired some of his most physically complicated dancing.

*"Human Nature" was first covered by the late jazz saxophonist and was included in his 1984 album "Steppin' Out". A year later, included a cover version on his 1985 album "You're Under Arrest". Davis would also play it in most of his concerts for the remainder of his life, and would include a further five minute or so extended instrumental.

*Later in 1993, "Human Nature" was sampled by R&B group . Released as "Right Here (Human Nature)", the song reached #1 on the R&B and #2 on the Pop Billboard charts in the summer of that year. This song still remains a popular hit today.

*'s "Thug Nature" is a play on this song

*In 2004, included a cover of the song on their album "", with providing the background vocals.

*Nashville singer/songwriter David Mead also recorded an acoustic version of the song on his 2004 release "Indiana".

*R&B Singer, performed Human Nature at the in Oslo, Dec 10 2007. However, she did not follow Jackson's lyrics .