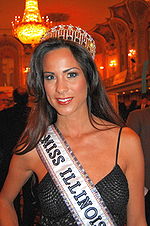 The Miss Illinois USA pageant is a competition that selects the representative for the state Illinois in the Miss USA pageant.

Illinois is one of the most successful states in the competition. It is one of only four states to have won four or more Miss USA titles and one of only three states to win two Miss USA titles in consecutive years. All four winners came from the early history of the competition, with their last Miss USA being Karen Morrison, who held the title in 1974. The pageant's most successful years were from 1984 to 1996, when all but two delegates made the cut at Miss USA. That period was followed by many years without a placement, until Jill Gulseth finished third runner-up in 2005, the state's highest placement since 1995.

In 1986, sisters Tricia and Laura Bach won the title consecutively, the first occasion of this in the history of the Miss Universe organization.[1] Later on in 1994 Kathleen Farrell, sister of Miss Florida USA 1988 won the title, making the state pageant the first to have two sisters compete in Miss USA.

1 Age at the time of the Miss USA pageant