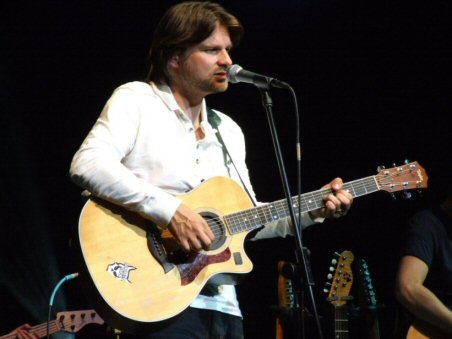 He is the cousin of Ian Wilson, better known as Ian Catskilkin, of UK Indie band Art Brut.

Ray started off in a band called Guaranteed Pure in the early 1990s. They released an album called "Swing Your Bag", the title track of which was included on a compilation album on the label of Fish entitled 'The Funny Farm Project : Outpatients '93'. He then joined Stiltskin; they released one album and had a number one hit in the UK with the single "Inside".

In 1997, Wilson joined Genesis following the departure of former vocalist and drummer . Interestingly, Genesis was formed in 1967 but Ray Wilson was born a year later in 1968. Other musicians who have joined bands that were formed before they were born include of Jethro Tull and of . The arrival of Ray Wilson marked the decline in Genesis record sales, which had been phenomenal during the era of . The band went on hiatus after one album, "", and a tour with Wilson.

Wilson went on to record a solo project called "Cut_", which he has described as sounding bad. The album "Millionairhead" was released under this name. It was re-released in 2007 (remastered) including three additional songs.

In 2003 he released a solo album under his own name titled "Change". The next year he released another studio album entitled "The Next Best Thing", which included a cover of "Inside". In 2006 he released another album called "She" and in 2007 a Stiltskin live CD featuring below others 8 out of 12 songs from "She". This live CD was recorded 25 October 2006, at Harmonie, Bonn, Germany.

Although Wilson would frequently perform Genesis songs as a solo artist following his departure from the band, he is now openly regretful for joining the band. In an interview with "The Living Scotsman" in April 2007, he said he felt out of place with the rest of the band, describing them as a "horse-riding, polo playing set" while describing himself as "working class". Further, he described his dismissal from the band as being "like death by silence" and thought it was handled improperly. [http://living.scotsman.com/index.cfm?id=602912007]