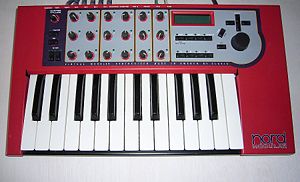 However, unlike most other analogue modelling synth hardware, which generally simulate one or a small number of (usually subtractive ) synth circuit layouts, the Nord Modular range approximates the much more flexible world of modular synthesizers, offering an almost unlimited variation of synth architectures, with the facility to simulate, in addition to subtractive synthesis, additive, FM, and, in the second generation of the series, physical modelling synthesis methods, as well as a number of other sound generation and processing techniques.

Because of the flexibility offered by these synths, patches cannot be programmed from the controls on the units themselves. Patch editing is instead performed on a PC (connected via 2 dedicated MIDI ports in the case of the first generation and USB in the second generation or G2 systems), running editor software bundled with the synths.

The editor software is in appearance and function not dissimilar to computer-based modular synthesis environments like Reaktor which offer a graphical representation of the simulated modules and the associated connections between them. Unlike those systems however, the Nord Modular s are capable of functioning independently of a computer- the host computer plays no part in sound generation and is needed only to provide the patch editing interface.

The Nord Modular line of synthesizers features a range of modules familiar to users of hardware modulars: audio input and output modules, Oscillators, Low Frequency Oscillators (or LFOs), envelopes, filters of various kinds, mixers, audio effects such as distortion and chorus , logic gates and sequencers, which can be connected in almost any configuration- there is for example no restriction on connecting audio signal outputs to control signal or logic inputs (or vice-versa), allowing for a great deal of flexibility in patch creation. Patches are only limited in complexity by the available DSP resources.

However, the more complex a patch is in general, the smaller the available polyphony is, and in practice the specified full polyphony of the unit is only achievable when using a very small number of modules in a given patch. However, because of the flexible nature of the unit 'polyphony' does not correspond strictly to 'number of different notes sounding at one time'- indeed with some thought and careful programming it is possible to exceed the specified polyphony of the unit (by this definition of polyphony at least).

Clavia introduced the first generation in 1998. The series was discontinued in 2004 upon the release of the next generation Nord Modular G2 series. The G2 is an updated and more powerful version of the original Modular (the G2 uses a new version of the Editor software as well), with greater polyphony and a large number of new modules to address the perceived limitations of the first generation, most notably a range of MIDI sequencing and output modules (the first generation's sequencing capabilities were limited to control of internal parameters, a restriction which many users felt to be the system's biggest limitation), time-based effects ( reverb, delay, etc.), and physical modelling oscillators. However, there has been some debate in the NM community as to which generation produces the best raw sound, with many users feeling, for example, that the original series' filters had a more subjectively pleasing, grittier sound. 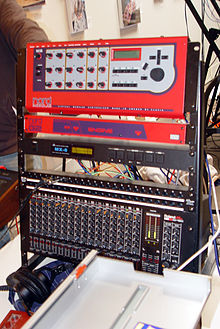 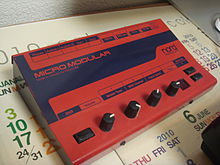 Used Nord Modulars can still be found for sale online.

The Nord Modular appears in the Nine Inch Nails video for Into The Void. Covenant's Joakim Montelius is an avid user of the Nord Modular range since the late 90's, in the studio as well as on stage. After the introduction of the G2 his main live keyboards have been an NM Classic Keyboard and a G2X. In the studio the band also uses a G2 Engine for additional processing.